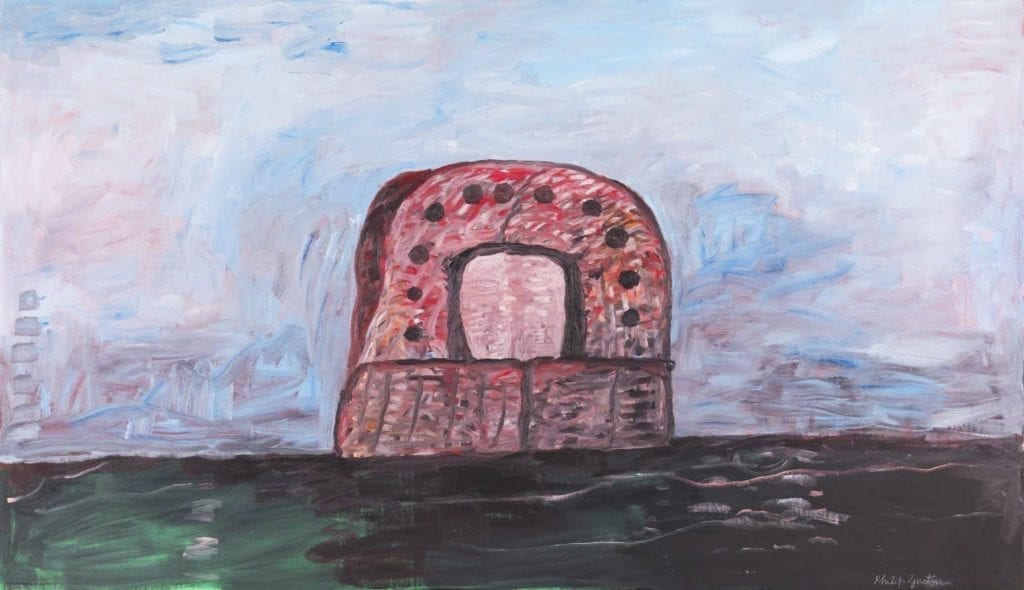 Why Black Sea by Philip Guston is an important painting:

Black Sea presents an audacious absurdity in oil. Obsessed with the lowly boot heel, painter Philip Guston dwells in a crude and even cruel reality. He creates a vivid, disconcerting portrait. The bare bottom of the boot heel atop dark waters. The plebeian symbol seems to rise like a Roman arch in the canvas center. But with its slanted sides, raw wood, and wonky nails, this heel’s not fooling anyone. No matter where Guston places it, a boot heel bottom holds no majesty.

This one doesn’t even have a sole to cover its shabby wooden innards. Instead of elevating the heel, Philip Guston raises questions about it. Given the title, Black Sea, viewers must check out the setting. That valiant, choppy sky’s intriguing compared to the bruteish boot bottom. Canadian American painter, Guston varies his sky brushwork.

He mobilizes many hues into an active atmosphere. The sky dances around the banal boot heel. It mocks the stodgy brown stick-in-the-mud. Winds blow and toss. They change with the weather. A boot heel stays what it is – forever. There’s not much to see on the boot’s bottom. We see this crude object from the point of view of a bug. Turns out, that’s the point.

Philip Guston painted Black Sea with a personal purpose. Before this he’d been a successful abstract painter. What shifted him into this confounding and base representation of a boot heel? One thing’s for certain, he created an uproar. When we figure out why this painting’s important, we also get the answer to this question.

Artists create with a variety of motivations. Some act out an inner drive to express themselves to others. For them, it’s about sharing with the viewer – perhaps even making a point. Another artist might have a completely different process. For them it’s a journey of discovery. Such an artist finds out what a painting is as they create it. They may have some things in mind and, of course, must make choices along the way. But it’s about learning from these choices not imposing them on a preconceived idea. Philip Guston was such a painter. He explored emotional challenges in his paintings.

Black Sea shocked me the first time I saw it. It was the context that surprised me – a collection of masterpieces. I felt discomfort – confronted with a work of art legitimized by experts and wondering why. At first I speculated… Maybe the crude boot heel bottom isn’t this painting’s subject. After all, the title refers to the setting. This points to the absurdity of the image. A boot heel floats in the sea – like a giant, ugly brute. But there’s mastery beyond the boot bottom, the Black Sea, and even the lovely sky. That’s in the meaning behind this masterpiece.

This point, 1977, marked an abrupt move in Guston’s impressive career. He shifted away from his glorious abstract expressionist works. The painter focused on a new purpose – to point out messy realities. Guston had complained about the false feeling behind making his abstract works pretty. He even called abstract art a “lie”. He started painting common figural subjects to work through that frustration. They are often labeled as “cartoonish”. But there’s pain behind these works. Philip Guston dealt with brutality and fear as a child. He grew up Jewish, the child of Russian emigres to Canada. In 1919 his family moved to Los Angeles, where he spent his childhood.

Before Guston became an eminent abstract expressionist, his paintings often depicted KKK members. So, this shift into figures wasn’t an abrupt turn of the page. It was more a returning to the source. In fact, Guston painted abstract works from 1940 until about 1970. So, he started when the Nazis came to power. Then his work stayed abstract through the US’s early civil rights struggles. The US Civil Rights Act of 1964/65 marked a beginning of change. So, in 1970 there was hope on the horizon for racial and religious equality. This set a stage for Guston (who grew up Goldstein) to again paint KKK subject matter.

With this in mind, check out the bottom of the boot heel again. We see it from a bug’s perspective. But it can’t crush us. In fact, this can’t even touch the ground. Instead, it floats. The heel’s an impossible spectre over the roiling Black Sea. That plain, cartoonish quality Guston brandishes saps the boot bottom of all power. He gave it no sole. Instead, letting us gaze into the naked, nailed center of this lowly object.

Of course, we are not bugs, standing in the Tate Museum or flipping through a book on masterpieces to see this painting. That’s Guston’s point. Nazis and the KKK often compared Jewish people to bugs. He shares the bug’s perspective in this absurd space to show us the banality of evil. A boot heel can’t crush human spirit.

Where can I see Philip Guston’s Black Sea painting in person?

This surprising work graces the walls at the eminent Tate Gallery. The museum purchased Guston’s Black Sea in 1982. The Tate Catalogue Entry remarks on the piece’s distinct significance. Much of Guston’s later work depicts shoes – even their bottoms. But this is a rare singular portrayal.

Why was Philip Guston obsessed with depicting shoe and boot heels?

We have Guston himself to thank for the answer to this understandable query. He said that after showing his work at the Jewish Museum in 1966, he made a decision. Guston:

…wanted to go on and deal with concrete objects. I got stuck on shoes, shoes on the floor. I must have done hundreds of paintings of shoes, books, hands, buildings and cars, just everyday objects. And the more I did the more mysterious these objects became.

From this quote we see that Guston followed internal impulses through his work. He let his painting lead him – like a detective following clues. The mystery defined his purpose and subject matter to paint. So, viewers of his work share a lot in common with the artist. Together we search Guston’s symbols for meaning behind enigmatic depictions such as Black Sea.

Why is Philip Guston an important painter?

Philip Guston plays a significant role in art history. He’s an iconoclast thanks to his pioneering attitudes and practices. Guston cared most of all about his vision – not the audience. This made him noteworthy among artists; who often spoon feed critics with palatable pieces. He did the opposite. Thanks to his stalwart independence, the art world continues a firestorm debate about Guston’s work and merit today.

In fact, 2020 marked a controversial year for a traveling Philip Guston retrospective*. It started when four of the world’s most eminent museums battled with the art community over Guston’s paintings. Their choice to show or not show his work created quite a buzz. This Philip Guston debate made The New York Times and other esteemed news outlets. It was a major story ….and not just among art insiders.

Notoriety like this follows when an artist sticks to their own vision. Black Sea sets just one of many examples of why Guston’s an artistic icon. His paintings shocked and surprised us many times over his five decade career. They still do. His body of work also left a lasting impression. Guston’s vision continues to disrupt rather than comfort even his most ardent fans. That’s what makes Philip Guston a master painter.

Bucklow, Christopher. What is in the Dwat. The Universe of Guston’s Final Decade (The Wordsworth Trust, 2007)