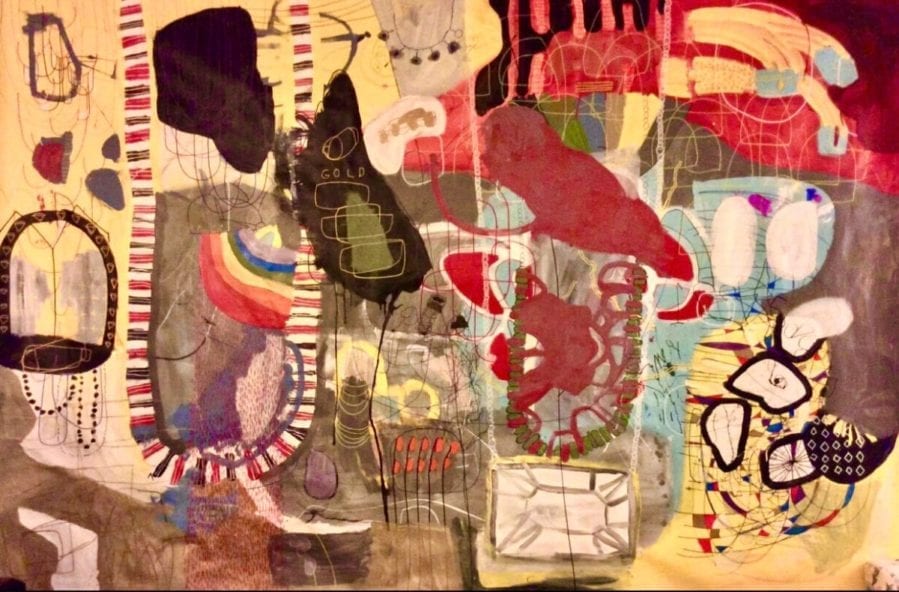 Painter Nathan McKenney, aka @early_touch, creates engrossing artwork. Love to dive into art and get lost? This is the painter for you. McKenney paints and draws new worlds. He combines acrylic paint, marker, and cut out words on canvas. Thus, his work plays with the viewer through layered imagery. Nathan likes to sign his paintings “E.T.” in the corner. This is partially a reference to his alias Early Touch. Indeed, when asked about it, Nathan McKenney says he never liked the signature “N.M.”. McKenney adds that he always liked the movie E.T. too.

Such whimsy and confidence give this painter from Chattanooga, Tennessee an urbane quality. His work dips into playgrounds packed with potential relevance and meaning. For instance, the Nathan McKenney painting below, Mars, reveals this rare instinctual quality of Early Touch.

Boys Inside Men on Mars

It feels masculine. After all, more gonads, diamonds, and phalluses populate this painting than any rap video. There’s also a sense of antics mixed with animalistic acts. A shadowy knife on one side. A pale wolf on the other. But the NASCAR flag tips the work’s manliness imagery off the charts. Like all Nathan McKenney paintings, Mars carves a path into a precise subconscious. That’s the mystery. It’s like trying to unravel the dream of your favorite crush. Enticing, perplexing, and playful, it’s painting as intellectual flirtation. Is the dream actually connected to anything real? Only your crush knows the truth.

The best part of it isn’t the macho elements. It’s the vulnerable boy rising from the depths of Mars. We see him in bits and pieces. But most of all it’s the mood. McKenney’s piece reminds us of that child inside every man. He’s there no matter how many times we stamp MAN on his forehead.

But not all American painter Nathan McKenney’s works are about people. Just look at the title painting for this piece. There’s not a figure to be found in Opus. The painting speaks volumes just the same. It’s got rainbows and gold. All the rest fall into place like coins bursting from a yellow sky.

The more one looks at Retrograde, the deeper it goes. This painting’s not easy to unpack. But its devastating puzzle makes a point. Art isn’t easy. At least not when it’s worthwhile. That’s because easy is boring. Nathan McKenney paints messy maelstroms. His paintings force you to lean in and look closer. Does it say, “I’m hit”? You wonder. Yes, Retrograde does, among other things. His works integrate word maps, sometimes even poetry. They create tension in the painting’s dance. Tension’s the difference between just doing the steps and actually dancing. It moves blood in the body and adds soul to the tango.

This painting mystifies and moves me all at once. The flowers, swirls, and drinks (champagne?) feel like a playful party. Yet the painting seems serious. Parties with flowers and champagne sometimes turn us into retrograde adults. We can regress under the influence. This can be both a silly and serious situation. It also makes for a memorable painting. Colorful, spirited, and immersive, this one grips and doesn’t let go.

Nathan McKenney / Early Touch paintings work thanks to this quality. They give a viewer reasons to look closer and much to think about. It doesn’t only touch us. But moves us forward as well. Maybe that’s why Retrograde is one of my McKenney favorites. There’s such an irony in the name. His works have meaty mischievous titles. This draws you even further into the work with awe at what it all means. Fact is, we’re never going to figure out the significance of every canvas stroke. But we’re certain to have a blast trying. Check out Nathan Mckenney at his gorgeous website, https://www.nathanmckenney.com, and maybe we’ll get lucky enough to see one of his gallery showings too.