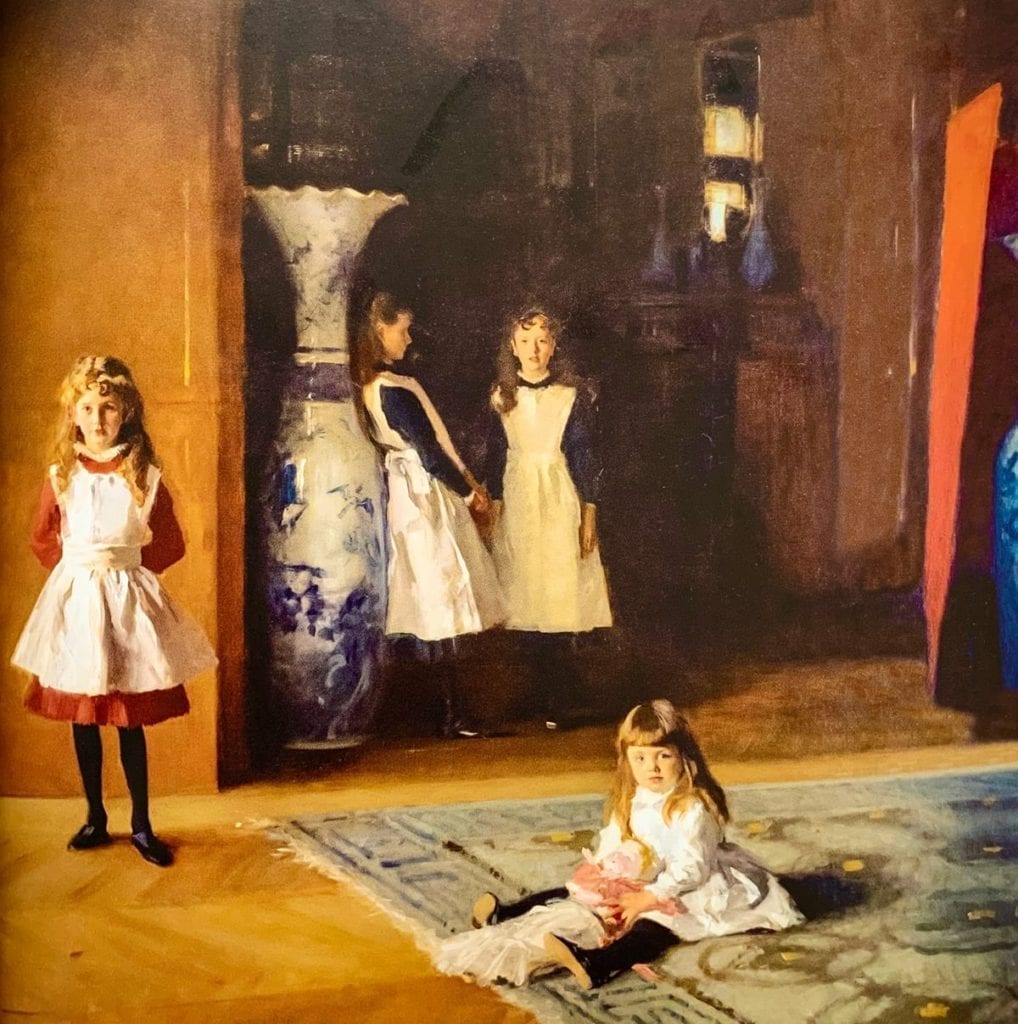 Sisters dwell in distinct developmental stages for The Daughters of Edward Darley Boit. This famous John Singer Sargent painting holds viewers rapt in a sisterhood spell. Four year old Julia faces us. As the youngest, she most wants and needs our attention. Julia’s also the most rooted in place as the only sitting sister. She clutches a pink baby doll in her lap. This makes sense given the loneliness of the portrait. It’s a painting of a family without any familial sense. Pricey objects and paintings stand in for parents. The space seems vast and empty – more museum than home.

Off to the left Mary Louisa looks like she wants to run away. At eight years old and dressed in red, she’s poised but not present. Her gaze and mind’s eye look elsewhere. Mary Louisa stands out thanks to the red. But it’s also literal. She’s offset and on her own among the sisters. Eight years old is the age when kids show more independence. They also start to care more what others thinks about them. This push-and-pull shows in Mary Louisa’s isolated position. She’s also holding a polite stance – arms clasped behind her back. So, Mary Louisa represents equal parts rebel and docile sweetpea.

Twelve year old Jane seems surprised facing the painter at the back. She’s on the brink of teenhood. So, shock fits her situation. Soon Jane won’t recognize her own body or know how to name her feelings anymore. It’s a bewildering stage she’s facing. It’s almost as confusing as posing at this awkward phase for The Daughters of Edward Darley Boit. That explains her startled expression and the way she fixes her gaze above and beyond us. John Singer Sargent was already a famous painter at this time (1882). There are few twelve year olds with enough body confidence to stand proud for what could easily become a masterpiece.

The Daughters of Edward Darley Boit – Alone Together

The most distinctive sister, Florence pouts beside Jane. She leans on a Japanese urn taller than herself. At fourteen, Flo’s the eldest and most disgruntled Boit sister. In fact, she’s so done with this whole situation, we only glimpse her profile. Florence and Julia are farthest away from each other in age. But they’re also not in each other’s sights. In fact, Flo only sees Julia, the sister closest to her in age. Julia, meanwhile only looks at us. She takes the sisters behind her for granted. That’s a typical four year old for you.

The foursome aren’t ordinary sisters, though. This Paris apartment reeks of money and class… but also emotional neglect. Exquisite objects hold top priority here. Children are for portraits, not cuddling. Spaces Sargent paints between the Daughters of Edward Darley Boit belie emotional chasms. There’s no bonding here. In fact, even though these sisters are gorgeous and rich, none of them ever married. The connections we make in childhood teach us how to relate as adults. These sisters are together but still seem isolated. So, Sargent was onto something when he painted this portrait. The sadness in his 1882 masterpiece anticipated four lonely futures for these girls.

Watch the video below to learn more. It discusses American painter John Singer Sargent’s use of the color white. He conveyed familial unease with his thoughtful techniques in The Daughters of Edward Darley Boit. Profound details abound in the work. From Sargent’s use of light and shadow to spatial relationships – it’s no surprise this is such a popular artwork. Still, as appealing as this painting remains, it feels enthralling not despite its sadness but because of it.

Where can I see The Daughters of Edward Darley Boit in person?

The Daughters of Edward Darley Boit sits in the permanent collection at the Museum of Fine Arts in Boston. Notes on the painting point out that it was a gift to the museum from the four daughters portrayed. They gave it in memory of their father – the work’s namesake.

What was the original title of painting The Daughters of Edward Darley Boit?

This painting portrays the four girls in their Paris apartment. So, the original title of the work is in French – Portraits d’Enfants.

What makes this painting so special?

Many aspects of John Singer Sargent’s The Daughters of Edward Darley Boit stand out in the art world. Its unusual composition was the first element that created buzz. Then the way it was exhibited also attracted attention. The tremendous blue and white japanese urns in the painting now surround it in the art gallery. Like the painting, these were Boit family gifts.

What paintings influenced The Daughters of Edward Darley Boit?

We know that John Singer Sargent studied and copied Diego Velázquez’s Las Meninas. It seems clear that this painting played a role in Sargent’s choice of composition for his peculiar portrait. In fact, The Museum of Fine Arts Boston loaned Sargent’s masterpiece to Museo Del Prado in 2010. So, the two paintings could be seen side-by-side.

Enjoyed this The Daughters of Edward Darley Boit analysis?