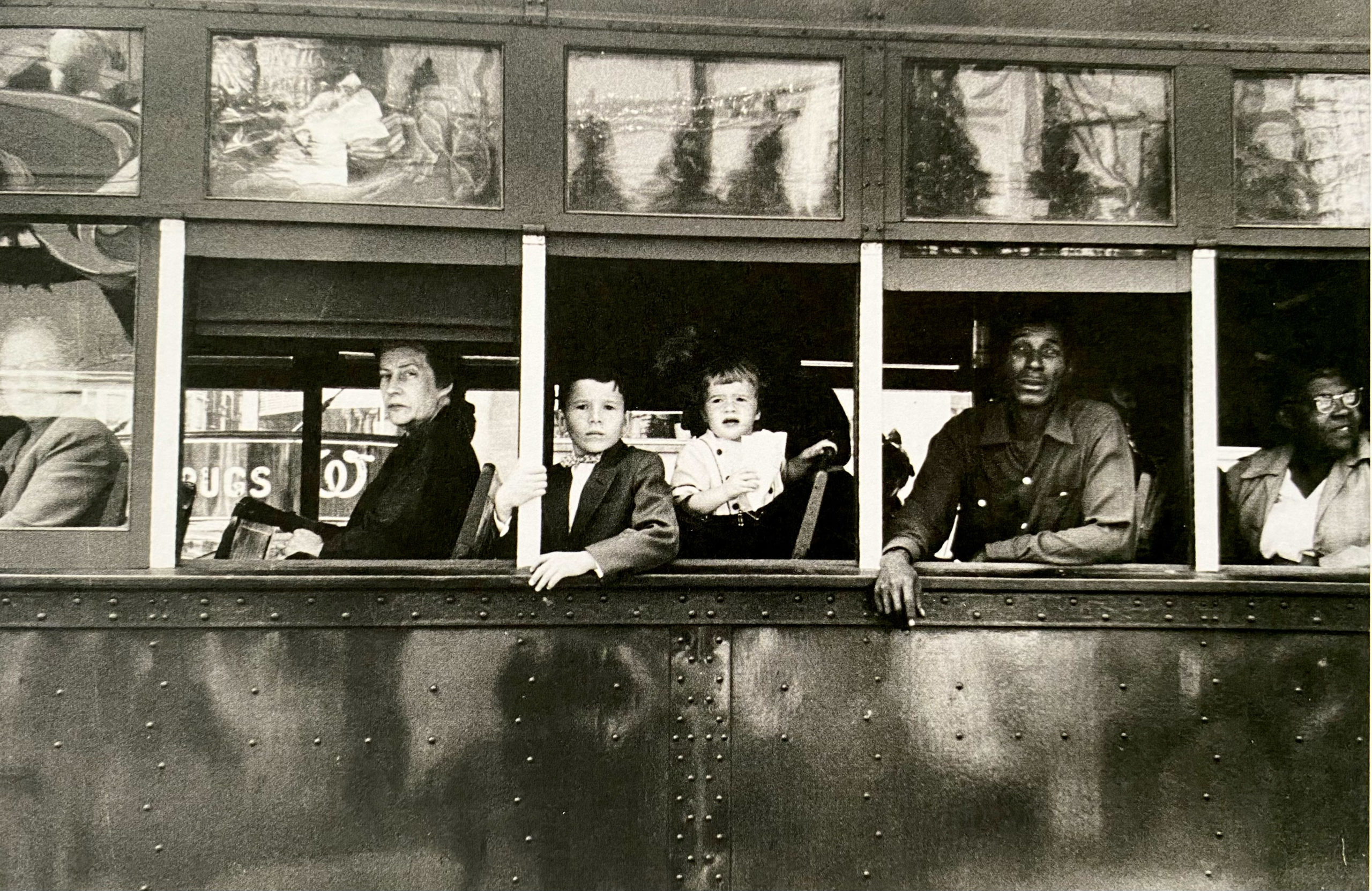 Why is the Robert Frank photograph Trolley New Orleans so important?

The Robert Frank photograph Trolley New Orleans captures a candid moment in 1955. It shed light on the true America. Frank was a nomad photographer who crossed the United States from New York to California. As a German man born in Switzerland, Robert Frank brought an outsider perspective to this nationwide journey with a camera.

He came from post World War II Europe with an idealized concept of America’s tolerance and freedom. After all, the American Allied troops had swooped in at the end of the war announcing these exact policies. Robert Frank came to the United States to see this liberty in action. He set out to capture this freedom-loving nation and planned to compile a book about it called The Americans. Things didn’t go according to plan, exactly. But one aspect did, Frank published a book about this journey in 1958 entitled The Americans. Turns out it wasn’t a book about tolerant freedom lovers.

Instead, photos like Trolley New Orleans reveal a system of racial segregation and intolerance. This one opens up the calculated structure behind black and white separation like a fan. The trolley pauses before us thanks to Frank’s camera. But the blurred windows at the top remind us that this is a moving vehicle.

We know the subject continues to pass by after this seized split second. Just as systems with momentum behind them tend to do. So, it’s not only this trolley that’s segregated by race… another one will come along behind it eventually with the same racist system in place. Racist policies embedded within a transportation system are self-perpetuating until somebody stops the cycle. That’s exactly what Rosa Parks did in 1955 when she refused to go to the back of the bus, the same year Robert Frank took this picture.

The complexity of Frank’s composition in Trolley New Orleans flows between its many black and white frames. The outer frame shows us the dark and shiny trolley. It represents the glimmering facade that reflects what we want to see back to us, like a mirror. The bleary windows above show us how imprecise that mirror can be. These reflective boxes give us unrecognizable images. It’s the first hint that there’s something amiss in our preconceived projections of what’s going on here.

But the heart of Trolley New Orleans slices through the middle of the photograph like a serrated knife. The trolley car punctuates each square window with white bars on each side, as if to say that whiteness organized this system and keeps it in place.

In the first seat at the front of the trolley we see an unfocused and anonymous white man. He looks toward us but a half open window obscures his features. This could be any white man. Behind him in the next seat we see a formidable white woman. She’s not in any mood to have her picture taken and we can see her grim face with clarity.

In the center frame of Trolley New Orleans my heart skips a bit because there are two children, a boy and a girl. It’s just so perfect for this masterpiece because children are often at the heart of many conversations about race. I’ve heard hundreds of times that children “don’t see race” and “have to be taught racism”. But that’s not true.

When racist policies like segregation color your everyday experience as if they are acceptable, you grow up with a foundation of unconscious racism built into your brain. If it’s normal to you that the black people always sit at the back and the white people are entitled to sit in the front, that’s normalized racism.

Behind the children in Trolley New Orleans the next window holds a black man who gazes directly at us with an open and overt sadness. His eyes seem to be welling, perhaps with tears or maybe just with wonder at being photographed.

My favorite passenger on the trolley is our bespectacled, black lady at the very back. She wears a bemused half smile and seems to be lost in her own thoughts. The vibrant brightness of her white shirt and light jacket help balance the overall composition. Her greatest gift to this powerful photograph is the way she looks off to the side.

She’s got a whole life outside of this trolley. Her glance away reminds us that there’s more on her mind than this moment. Sure, she’s sitting at the back of the bus right now. It stinks. But it’s also simply another part of her day and she’s smiling anyway. Maybe she just got off work and pictures a well-earned and relaxing evening when she arrives home.

That’s the complexity of this photograph expressed through one individual. America is a complicated place. There’s centuries of racist, oppressive, history we need to face about ourselves. At the same time, we’re also a country filled with hopeful hard workers who often have plenty to smile about.

Most discussions of this photograph call it gritty and dark. Certainly, racism and segregation are terrible truths in American history. But that’s not the whole story of this masterful photo just like it’s not the whole story of America. Robert Frank’s mastery was in capturing the complexity of his subjects and thus, their country. I recommend checking out his book, The Americans to see more examples of his visionary portraits of the true 1950s America.

Why did Robert Frank take a picture of a trolley in New Orleans?

When Robert Frank traveled across the United States in 1955-56, he sought a portrait of America through her people. Born in Switzerland, Frank was German and came to the US with an idealist’s expectations. He imagined finding the land of the free, as advertised. But ended up seeing behind the curtain into the true America.

Asked about his unique photographic vision, Frank explained that he saw things with an unromantic eye. Rather, he wanted to get to a kernel of truth about people in his portraits.

This cross country journey compiled more than 27,000 photographs. Frank chose 83 for his iconic and groundbreaking book The Americans, published in 1958.

Where can I see Robert Frank’s photograph Trolley New Orleans in person?

The first time I saw Trolley New Orleans by Robert Frank was in the Metropolitan Museum of Art. But this photograph is quite famous and popular. You can also see it at the MOMA and many other museums. The work of Robert Frank changed the world of fine art photography, shifting it into a more realistic realm. So, his photographs are prized by museums across the globe.

Enjoyed this analysis of Trolley New Orleans by Robert Frank?

Check out these LadyKflo essays about fine art photography.

Trolley New Orleans at the Metropolitan Museum of Art or MOMA