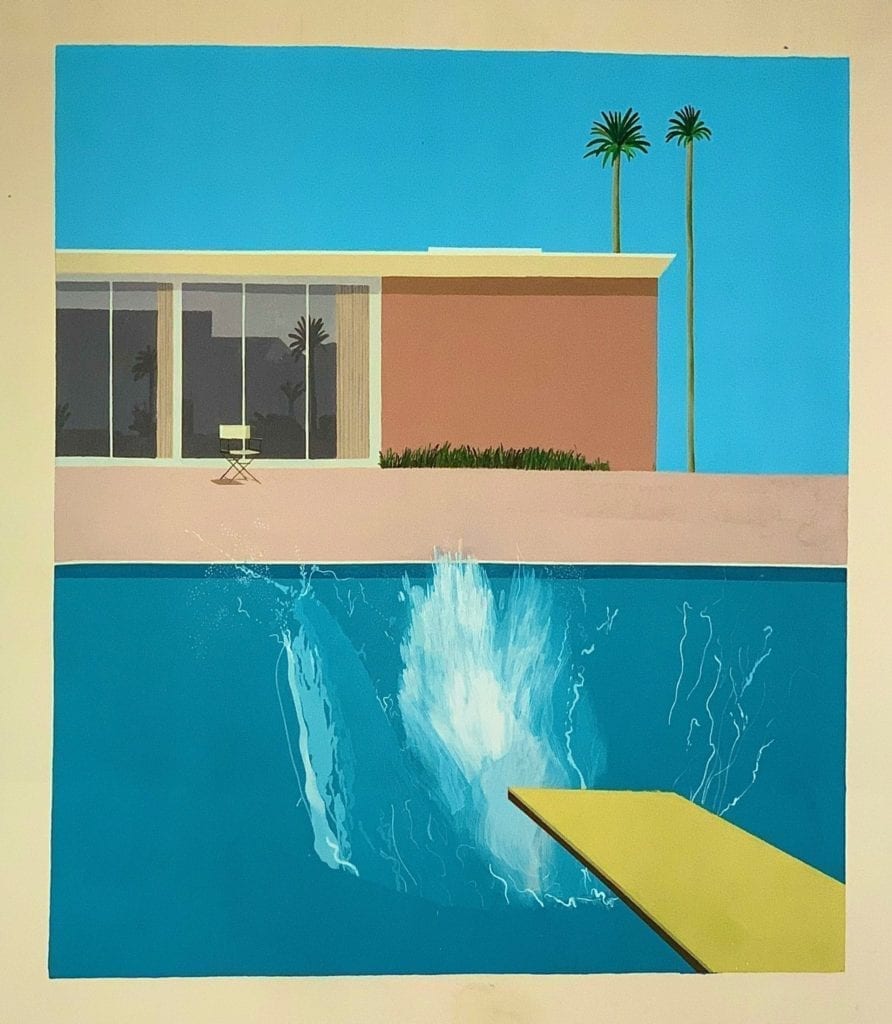 A Bigger Splash by David Hockney resonates across time with its familiar, fresh image. Painted in 1967, this masterpiece feels new no matter when you check it out. Sure, modern classic sounds like an oxymoron. But it’s also a fitting phrase for this piece. That’s thanks to its split second splash. It would be hard enough to capture this with a camera. The impossibility of painting such an event in person thus feels photographic. It’s of-the-moment – splash in a flash.

David Hockney catapulted the Pop Art movement in England. Then he fell in love with Los Angeles, California and its beautiful boys. In a way, this works as a portrait of one. It’s the momentary absence of a boy. He slid into the cool blue and left only a memory with a white brushstroke behind. This points to love and its absence, a reality in every relationship. One moment we’re mad for each other and in the next, we’re apart. It’s a vivid new take on humanity’s oldest story.

The painting’s playful nature keeps it light and fun. It sparkles with simple colors and shapes. Hockney’s brushstrokes are undetectable. Every surface in A Bigger Splash sits smooth and clean on the canvas – even the grass and palm tree leaves. There’s only one exception and it’s the painting’s hero – a splash. In this we see the squiggy white brushstrokes, fat and skinny bits dancing together. Hockney’s fondness for swimming pools shines through the clean delight of this piece.

When he first moved to sunny Los Angeles from chilly Britain, Hockney thrilled at the climate. It was a wonder to him that it seemed everybody had a pool in LA. He fell in love with California and thus painted many swimming pools. In fact, Hockney experimented with the surface tension of pool water. Painting water presents challenges. But we see in A Bigger Splash how water offers storytelling opportunities as well.

When looking at A Bigger Splash today, we have art history to serve the story for us. Hockney sparked the Pop Art movement then dove in a new direction soon after. This 1967 painting represents his more naturalistic move. He shows a deeper artistry here with his Los Angeles lens. The background house contrasts crisp boxes with smudgy shadows in its windows. The foreground plays a similar game. After all, that splash jettisoned off the sharp yellow board into bright blue waters. So, opposites in color and edge play together on this canvas.

It’s a teasing portrait of a submerged subject. The diver remains hidden – they’ve plunged into a dream world for us, the viewers. Their invisibility tugs at our emotions. We can’t help but feel curious about the missing element in the story. Hockney’s given us an image of love as a secret. It’s evident only as a residual effect – a splash. How do we know someone’s in love? We don’t actually see love itself. But we often see the impact it has.

There are other seen and unseen facets at work here. For instance, Hockney used negative space as a framing device. He integrated raw canvas using fast-drying acrylics. So, rather than adding a roof onto the house and a frame around the story, he left them unpainted. This requires precision and patience. Like leaving words unsaid, it takes maturity to restrain a paintbrush at work. Hockney makes A Bigger Splash with this piece thanks to that constraint.

Where can I see A Bigger Splash in person?

The Tate Britain museum purchased A Bigger Splash in 1981 and it continues to grace their Walk Through British Art collection. There have been other noteworthy sales of Hockney Splash paintings. That includes his work The Splash which sold for $29.8 million in February of 2020.

David Hockney has said he wouldn’t marry his long-time partner because “marriage is about property”. When interviewed by The New York Times, the British painter said his chief assistant Jean-Pierre Conclaves de Lima was his faithful companion of many years. How many? At the time of the article (in 2017) they’d been together 15 years.

Why is A Bigger Splash such an iconic painting?

There are many versions of A Bigger Splash. But this one, displayed at Tate Britain, remains the most resonant. It represents a shift in the Pop Art movement from familiar, flat imagery to deeper themes and subject matter. Hockney uses a splash of water to tell a love story with this masterpiece. It’s simple, powerful, and unforgettable – just like love.

What makes David Hockney such a famous painter?

David Hockney rocked the art world as soon as he made a name for himself. He’s stayed on top over the years by staying relevant and selling pricey paintings. At this writing he’s the highest paid living artist. For instance, his painting Portrait of an Artist (AKA Pool with Two Figures) sold at Christie’s for $80 million at the hammer. That’s a total sales price of $90.3 million with fees.

Enjoyed this A Bigger Splash analysis?