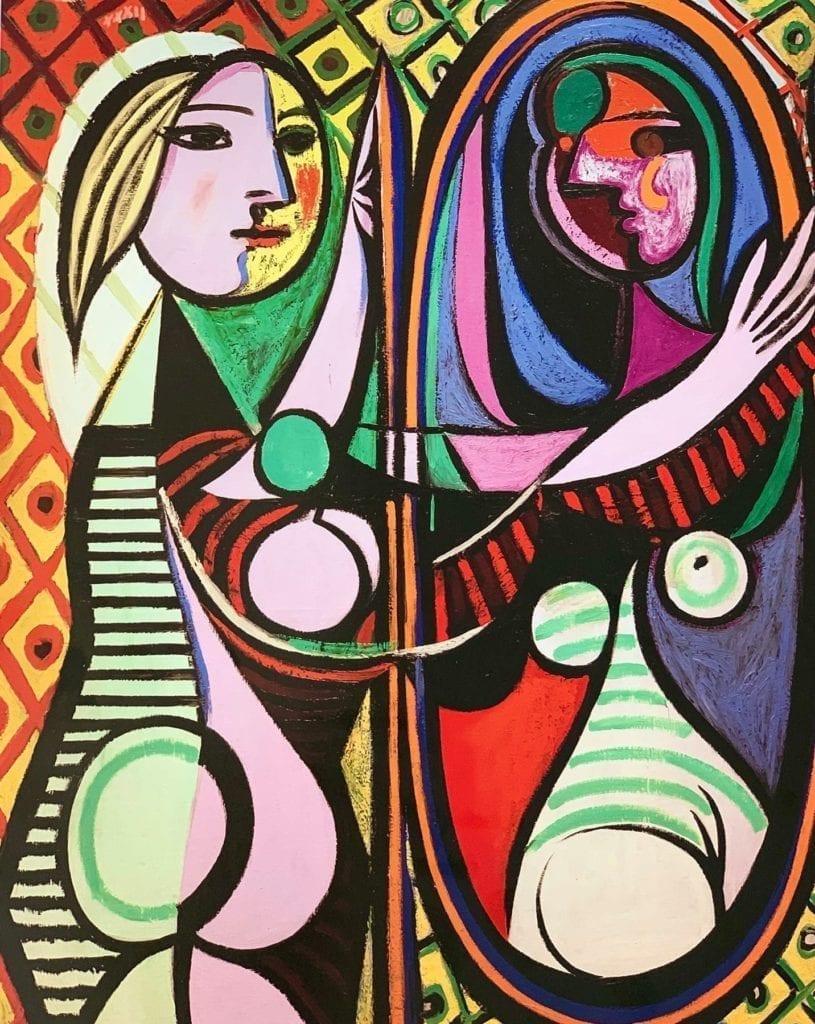 What’s the painting Girl Before a Mirror by Pablo Picasso about?

Picasso painted Girl Before a Mirror as a doubled abstract portrait. It portrays his beloved Marie-Thérèse Walter. She was young and it shows in the left side of this work. Her face glows like a radiant sun. Her belly swells in pregnancy. She represents the full potential of youthful beauty. But the Marie-Thérèse on the right has passed through the looking glass. She’s aged. Her glorious blonde tresses hide behind a shawl. That pale luminosity on her cheeks has shifted into ruddy redness. There are many moon shapes built into the elder portrait with the young girl’s reflection.

Just as the moon reflects the sun, this older version reflects the many phases of life. The moon represents time periods and the natural pull of our tides. We all pass through the phases of life into old age. Even this young beauty will get old someday. Picasso expresses an eternal love for Marie-Thérèse with this painting. He loves both sides of her. There’s the fresh fondness of today and the future vision of his love in the mirror on the wall. He paints both with care and attention.

But Girl Before a Mirror doesn’t portray a girl at all. She’s got the swollen belly of a woman. Pregnancy carries the body out of girlhood on a one-way ticket. The process of building another human in your uterus takes effort and time. Along the way it can take a toll as well. That progression will make a woman of any girl. Not only in a physical way, but also mental maturity. Creating a new human being involves both types of work.

Spanish painter, Picasso shows Marie-Thérèse taking measure of herself in Girl Before a Mirror. She assesses and caresses her face. The one she sees in the mirror isn’t the one we viewers see as current, though. It’s her future she faces. In the mirror she’s no longer pregnant or even recognizable. Time has changed Marie-Thérèse. The beauty in the painting balances this for us. Though she’s a different figure on the right side of the painting, she has equal value and power in the piece.

In Picasso’s eyes, his beloved maintains her significance through the passage of time. She measures herself and reaches out a hand in acceptance. This represents Picasso with his paintbrush. He too sees her value in the moment of painting her as well as the vision of her future. Yes, she will age. We all do. In Picasso’s vision of his aging partner that time passage only makes her more interesting. Marie-Thérèse in the mirror swells with lush colors much like how her younger self swells in pregnancy. She’s got more layers and shapes in the future too.

When Picasso began his relationship with Marie-Thérèse, she was seventeen. He was forty five and married to Olga Khokhlova. Picasso always portrayed the sunny and bright side of Marie-Thérèse in his portraits. This one, painted when she was pregnant with their daughter, Maya, especially. His cheerful take on her seems most profound in Girl Before a Mirror, though. That’s thanks to the measure of time inherent to the painting. It represents Picasso’s mid-life crisis. Turns out no matter how young your girlfriend, time still stares you down in the mirror. We all have to face death, no matter how many distractions we try. In fact, Picasso took Dora Maar as his lover after Marie-Thérèse and thus began his tormented “weeping woman” portraits.

Some art historians see vanity and duality in Girl Before a Mirror. Picasso practiced Cubism when he created it. So, it’s broken into pieces – like a puzzle put together. Common interpretations therefore see it as a binary portrait. That means many see dualisms such as night and day or self loathing and love in it. This makes sense. After all, there are two main figures in the piece. There’s Marie-Thérèse and her mirrored reflection. That’s an inherent duality. But the painting is about one person. She’s experiencing a single moment as if it’s a passage through time. These unifying points show the painting’s singular vision.

That’s the masterpiece to Girl Before a Mirror. The painting portrays a deep and moving human experience in a simple image. It’s not only about a girl with a sunny face looking into a reflection with many moons. Viewers often focus on the dualities of that. Then they stop there. But the real story of the piece goes a step further. It’s about how we stay true to ourselves over time. Some things about us never change. Sure, skin gets muddy and muscles turn soft. Time wears on external appearances. But deep down time also strengthens our core. That integral part of ourselves is where we find true self worth. So, even though this painting reflects on self love, it’s deeper than mere vanity.

Girl Before a Mirror – FAQs

Where can I see Girl Before a Mirror in person?

The delightful Museum of Modern Art in New York City houses Girl Before a Mirror. It’s part of their permanent collection. You can visit this work right where you’re sitting, though. That’s because the MOMA maintains a vast collection in their website’s virtual exhibit. IRL, this painting sits in founding director Alfred H. Barr, Jr’s gallery. It’s a perfect placement because he declared it one of his all time favorite paintings.

When was Girl Before a Mirror painted by Pablo Picasso?

Picasso painted this of his young and pregnant lover Marie-Thérèse in March of 1932. At the time he was fond of Cubism. This is why the work showcases a chunky puzzle-piece style with vibrant colors. Picasso was one of the founders of this distinctive method. It’s also worth noting that Cubism was popular in Paris at the time and Marie-Thérèse Walter was his French mistress.

Artists such as Pablo Picasso and Georges Braque used Cubism to reinvent reality with painting. They created this revolutionary approach around 1907–08. This way of painting combines different ways of looking at subjects in the same picture. That sometimes means bringing objects and figures together, for example. Cubism often abstracts and fragments representations in paintings.

Who is the lady in Girl Before a Mirror?

Enjoyed this Girl Before a Mirror analysis?