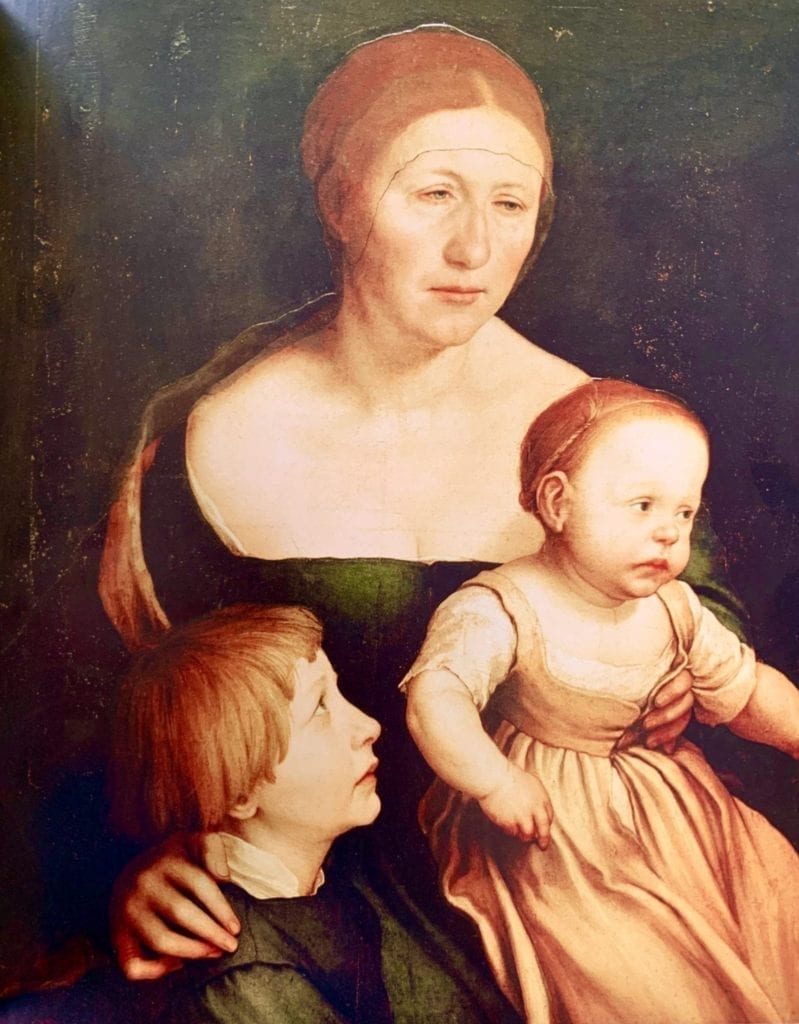 Portrait of the Artist’s Wife with Katherine and Philipp is the least famous but most poignant of Hans Holbein’s works. More historian than poet, Hans Holbein was the visual documentarian of his time. He was the ultimate portrait painter of 16th century England. Holbein’s portrayals of King Henry VIII and his court impact us to this day. In some ways his work enlightens. We know what they wore down to the tiniest jeweled bits. The hair and makeup also share compelling details about beauty ideals of the time.

But he also painted propaganda. That classic portrait of Henry with his white-stockinged legs wide apart? Hans Holbein painted it when the King no longer held himself with such majesty. The strength we see in it was Holbein’s creation. He was a working artist; trying to keep his boss happy. We see his wizardry at work in this as well as Holbein’s signature full length court portraits.

But there’s no Hans Holbein magic in his family portrait. This naked account of a miserable woman and her listless children reeks of reality. Time in court distinguished Holbein as a historic painter. But it also made him a terrible husband and father. The faces in Portrait of the Artist’s Wife with Katherine and Philipp show his neglect. Holbein painted what he saw in his family and it wasn’t pretty.

He portrays his withered family as ailing and unhappy. The same man who painted a false narrative for his King gave his family the shaft. It’s what makes this painting exceptional among Holbein’s many works. He lowered his defenses to show the true sadness of his subjects. This was the only time Holbein made this move. Family faces brought down his courtly shield. He delivers a punch in the gut of despair in this, his most emotional work of art by far.

Moving art makes a difference no matter the time or place. That’s one of the ways we know an artwork’s a masterpiece. It makes a connection across the ages. This piece certainly doesn’t define Holbein’s work. He’s noted for his royal portraits for good reason. But Portrait of the Artist’s Wife with Katherine and Philipp rises above them. This painting defines sadness and families left behind. Many of Holbein’s works remain iconic. Distant dignity color the others, though. His family portrait lacks Holbein’s otherwise all encompassing discretion. It’s as if his paintbrush got away from him in this rendering.

Holbein’s flawless royal portraits depict his sitters’ exteriors. We learn about the lives they present to others. That helps us understand them on a surface level. We know how they looked – not how they felt. Their inner lives remain inaccessible thanks to Holbein’s defences. He may not have been conscious of them. Discretion, after all, plays a natural part in court life. Also, what person wants others to see their partner and children this pathetic? They’re the picture of an abandoned, unloved family. This shows Holbein wasn’t aware of the shield he put up in court. Otherwise he’d have raised it for this work as well.

Noted British painter Hans Holbein’s royal portraits prove his mastery with faces. So, why paint his wife exhausted and withdrawn? This tragic trio represent the people most beloved to him. He shows them with precision and clarity. The realism strikes us almost as much as their despair. Holbein’s artistic ability seems to have overtaken his will with this painting. He gives us real life in all its superb ugliness. Realism takes incredible skill. But revealing the depth of human suffering in your own family’s faces… that takes a special brand of talent.

Portrait of the Artist’s Wife with Katherine and Philipp – FAQs

The Holbein who painted Portrait of the Artist’s Wife with Katherine and Philipp made history. He was a significant painter during his lifetime. But he was also the son of an important painter with the same name. His father, Hans Holbein the Elder, was a noteworthy Late Gothic painter. They were both famous enough to justify such nomenclature.

What is Holbein’s painting Portrait of the Artist’s Wife with Katherine and Philipp known for?

This painting stands out from Holbein’s other works with its intimacy. Holbein’s other paintings are stylized portraits with fine clothes and aloof faces. Portrait of the Artist’s Wife with Katherine and Philipp reveals deep feeling. He also portrays his family in simple, everyday clothes. It’s not always listed with this longer title. Sometimes the despairing Holbein work shows as The Artist’s Family.

What did Holbein’s family think of this portrait?

If only we could mindread our way through history to find out the facts of this. But the details we do know are telling in some ways. Holbein painted this in 1528. His daughter, Katherine, was only around two years old and his son, Phillip was a six year old. So, neither likely had much of an opinion of their father’s artistry. Also, his wife, Elsbeth Binzenstock, parted with the painting before Holbein died. So, she wasn’t attached to it either.

Holbein’s career skyrocketed thanks to a recommendation from the famous humanist Erasmus. He used it to join Thomas More’s inner circle in 1526. Once inside, Holbein built a reputation for splendid portraits. He wowed clients such as Thomas Cromwell and Anne Boleyn. By 1535 Holbein held the impressive title of King’s Painter for Henry VIII.

Enjoyed this Portrait of the Artist’s Wife with Katherine and Philipp analysis?