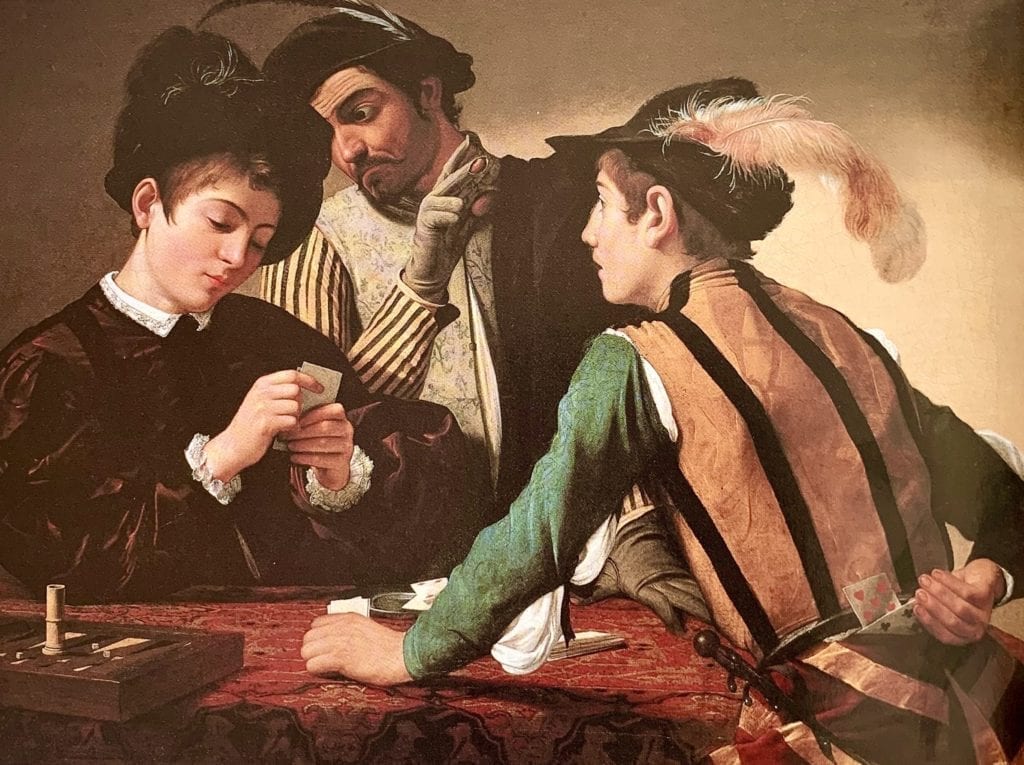 The Cardsharps defines early work from the famous painter Caravaggio. He’s so well-known that his first name (Michelangelo) isn’t necessary to identify him. Due to another well known painter with that same name, it might even cause more confusion. Caravaggio created this painting when he was broke and unknown.

Then he chanced upon rich gambler Cardinal de Monte, who loved this piece. It was a lucky draw for the young painter. He’d snagged himself an influential and rich patron. Caravaggio became quite a worthy investment. The Cardsharps shows why. This masterpiece tells a fun and familiar story in an innovative way for 1594.

The bad boy in greensleeves at the front of the painting sports a jaunty feather and colorful duds. He’s trying to distract the mark from his shenanigans. All it would take, though, is a glance at The Cardsharp‘s face. He’s nervous – an obvious rookie. His buddy, a wily rake across the table, signals to him in split gloves. Unlike the newbie, this ally has a veteran conman’s daring manner. So different from our plumed neophyte with eager fear on his face.

These two conboy types represent one of the many complex oppositions in the piece. Both bad boys pull one over on the simpleton softie between them. But their attitudes are contrary. The fingertip cuts in our pro’s gloves played a critical role for Cardsharps at the time. This was how they felt for marked cards without looking. The bold signals of their wearer and his blatant card peeping show they’re moot in this case, though. His wrinkled brow says it all. This guy’s marked the softest softie in town.

The vet’s attitude contradicts our rookie at the forefront. He’s antsy and anxious. Italian painter Caravaggio points out the difference between expectation and reality with these two. We imagine Cardsharps as the Slick Rick in the back. He’s the Hollywood ideal of the knowing conman – relishing the experience. But in reality cons are more like our buddy in front. Sweaty nerves and darting eyes are the actual feelings behind lies and scams.

Staring Down a Softie

So, this represents a high contrast confrontation. We see our amateur’s tension and determination in more than his face and stance. He also sports a jutting dagger at his side. Caravaggio gives this intense Cardsharp an indifferent opponent too. His wiry frame and bright colors contrast with the clueless boy he plays against.

The rich softie’s clothes are resplendent. He’s a deep velvet mush of a boy. Delicate hands and lace cuffs tell us this single card game won’t ruin him. The kid’s got the goods. He can shrug off the loss. So, these card players represent opposite states of mind. Our high-strung, skinny rookie has everything at stake. If caught, this’ll be the end of his con man career before it’s even launched.

Caravaggio tells a compelling story in The Cardsharps. Our newbie’s the leading man. That’s because he cares the most. His intensity makes us feel for him. This shows Caravaggio’s hand. The painter gives this con boy puppy dog charm. He’s pulling for the kid, and thanks to his mastery with a paintbrush, so are we.

Where can I see Caravaggio’s The Cardsharps in person?

See this wonderfully preserved piece at Kimbell Art Museum in Fort Worth, Texas. Their collection’s packed with masterpieces. That includes paintings from Edvard Munch, Paul Cézanne, and Fra Angelico – just to mention a few. It’s a balanced blend of modern and classical works, well worth a prolonged visit.

How did Caravaggio become a success?

Caravaggio met few challenges once he landed rich patron, Cardinal del Monte. The cardinal’s influence and connections boosted Caravaggio’s career. Commissions such as the Contarelli Chapel in the church of San Luigi dei Francesi made him a painting sensation. The power of primo networking has elevated many art careers over the centuries. Caravaggio’s relationship with del Monte illustrates an iconic example of this.

Caravaggio biographers love to write about his temper. The artist’s reputation for fights was legendary. He never got it under control, though, and eventually killed a man. As a result, Rome banished him. But Caravaggio created controversy with art as well as fury. His paintings flouted convention. He preferred the real to the ideal. The Catholic church often rejected his unorthodox pieces. But these same bold choices in the painter’s work also helped establish his impressive legacy as a master.

How much are Caravaggio paintings worth?

A 2019 Caravaggio sale made ArtNews headlines. The painting Judith and Holofernes (1607) portrays a well-known Bible story. A French art house planned a highly anticipated auction for it. They set its auction date in Toulouse, France with an estimated value of $170m. But a “foreign private buyer” snatched it up before this scheduled auction. The auction house declined to reveal the buyer’s name or price paid. Still, we know the painting was expected to set a new Caravaggio record at auction. So, this buyer didn’t likely get it at a discount.

ENJOYED THIS The Cardsharps ANALYSIS?