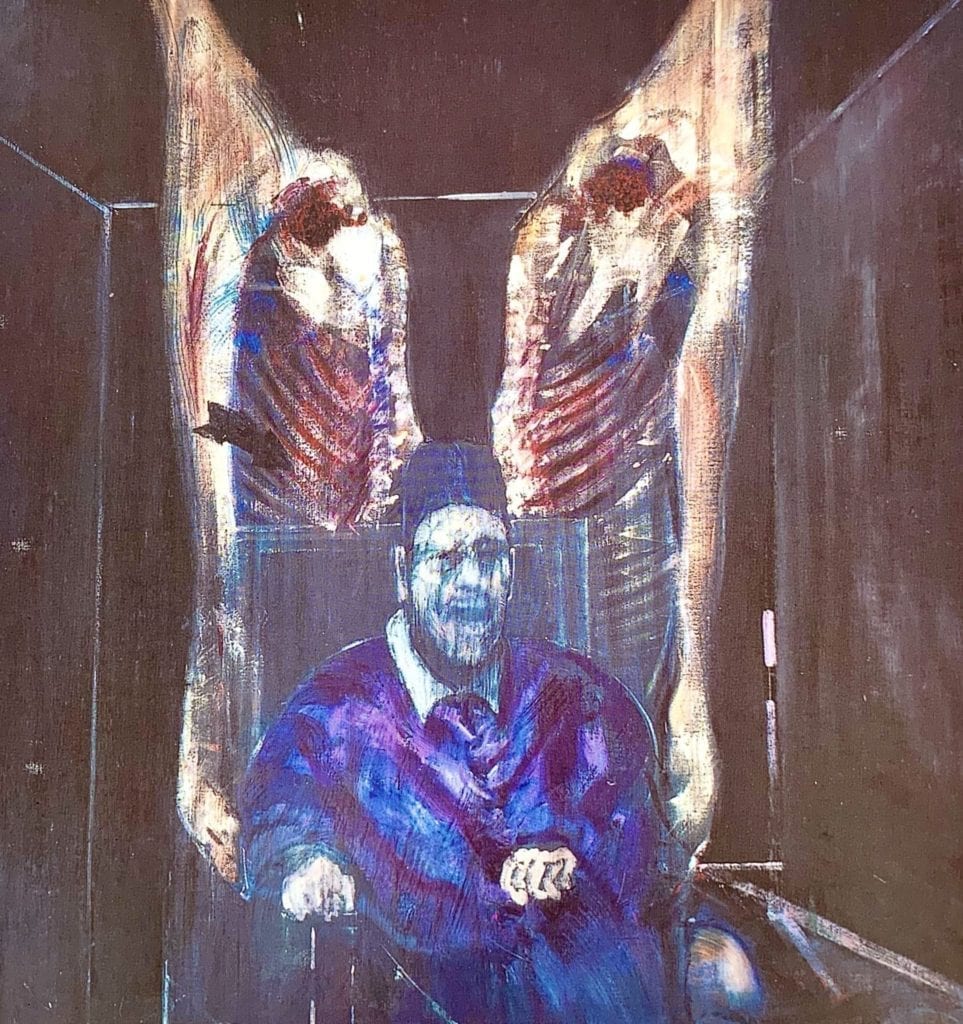 Why Head Surrounded by Sides of Beef by Francis Bacon is such a famous painting:

The painting Head Surrounded by Sides of Beef features one of Bacon’s infamous Screaming Popes. This masterpiece explores many dualities, especially Bacon’s obsession with horror. Here he plays with the two sides of terror; power and vulnerability. The Pope holds tremendous power. But he’s also trapped in the role. That makes him vulnerable.

Click through for the podcast version of this piece.

Bacon’s sides of beef hover above this Pope in what looks a lot like a cage. A thick black arrow points to the Pope’s head, in case we missed “Head” in the title. Head Surrounded by Sides of Beef doesn’t refer to a Pope. It speaks only of a “Head”. The Pope is the Head of his people and the state, even the world in some historical periods. Still, Bacon shows us here that this powerful position doesn’t make a man happy. There’s tremendous tension built into this canvas to help us see this.

The black cube background sets off a sketchy central portrait. He’s boxed in. This Pope’s anguish digs deep. We know this thanks to the raw carcasses draping the scene. They give the painting a beast quality. The animality strips away facades of tradition, ritual, and order. All elements the church uses to elevate the role of Pope. But with this Pope it’s all down to vulnerability. Symbolic power’s all he has left. And that’s not doing much for his mood.

Down to a Screaming Pope

Bacon crams the Pope into the bottom half of the canvas. He’s low in the chair and surrounded with a dark cube. This doom box seems to close in as raw meat dangles over him in a cagey stance. Flayed rib cages point toward his head much like the arrow. These bring a winged essence to the portrait. Still, the fleshy bones also menace the Pope. Placing wings on people and labeling them “angels among men” can be a trap.

All the elements of the painting narrow down to this Pope and his scream. It’s a portrait of agony. The figure’s forever frozen into a shrieking face. He clenches his fists. Bacon’s composition draws our eyes back and forth. Our perspective moves between the meat and this tormented figure. If we step back the ribs appear as ghostly wings. A closer look, though, reminds us of raw meat and its stench. Yet another glance at the ribs makes them into a cage. But these are not wings. He’s not jailed either. It’s a suspended animal carcass – raw and a bit nasty.

The figure in Head Surrounded by Sides of Beef recurs in Francis Bacon’s work. It’s only one of many Screaming Popes he painted. The Pope plays role of father to the Catholic Church. Bacon had a fraught connection with his own father. So, these portraits may show a way that the painter excavated his emotional past. After all, this work expresses profound feelings.

The Screaming Popes all unearth emotions. They move us in every Bacon Pope painting. But this one works hardest at it. A bloody bared ribcage brings this Screaming Pope down to earth. He’s more than a symbol head in Head Surrounded by Sides of Beef. Francis Bacon creates a telling composition for this Pope. The composition traps him and pushes him down, even as it grants the figure angelic wings. This portrait may be more figurehead than figurative. Either way it’s a definitive and moving masterpiece.

Why is Francis Bacon, painter of Head Surrounded by Sides of Beef, famous?

There are two famous Francis Bacons. The painter gained celebrity thanks to his relentless pursuit of anguished portraits. He was thrilled and obsessed with grotesque emotions. That’s why Francis Bacon indulged the worst side of humanity in his work. Thanks to his innovative takes on this, Bacon’s remained an art world star. He’s the ultimate edgy character in art history.

How much are Francis Bacon paintings worth?

His work fetches record amounts. For instance, Francis Bacon’s painting of fellow artist Lucian Freud was the most expensive ever auctioned when it sold for $142m in 2013. This triptych, Three Studies of Lucian Freud (1969), was one of Bacon’s most beloved paintings. But the asking price on any Francis Bacon painting right now is likely more than what the average person can afford.

Why are Bacon’s Screaming Pope paintings, like Head Surrounded by Sides of Beef, important?

Francis Bacon mastered the art of disruption. His Screaming Popes are a perfect example. He imposed a bleak interpretation upon the beloved portrait of Pope Innocent X by Spanish master Diego Velázquez. In this particular version Bacon replaced drapery behind the Pope with sides of beef. But it’s only one of many famous Screaming Pope paintings. In all of them Bacon reshaped the face into a messy blur of terror. He brought nihilistic horror to an iconic image of tradition and order. In the process Francis Bacon created a new masterpiece. Disruption at its best.

How many paintings did Francis Bacon make?

The Francis Bacon Catalogue Raisonné documents 584 total paintings by Bacon. But each painting might have several names. For instance, Bacon called this piece Study After Velázquez when he first showed it. He used that shorter title again after a few showings of it as Head Surrounded by Sides of Beef. Then Bacon also gave it the name Figure with Beef. The painting currently sits in the Art Institute of Chicago collection with this name.

Enjoyed this Head Surrounded by Sides of Beef analysis?