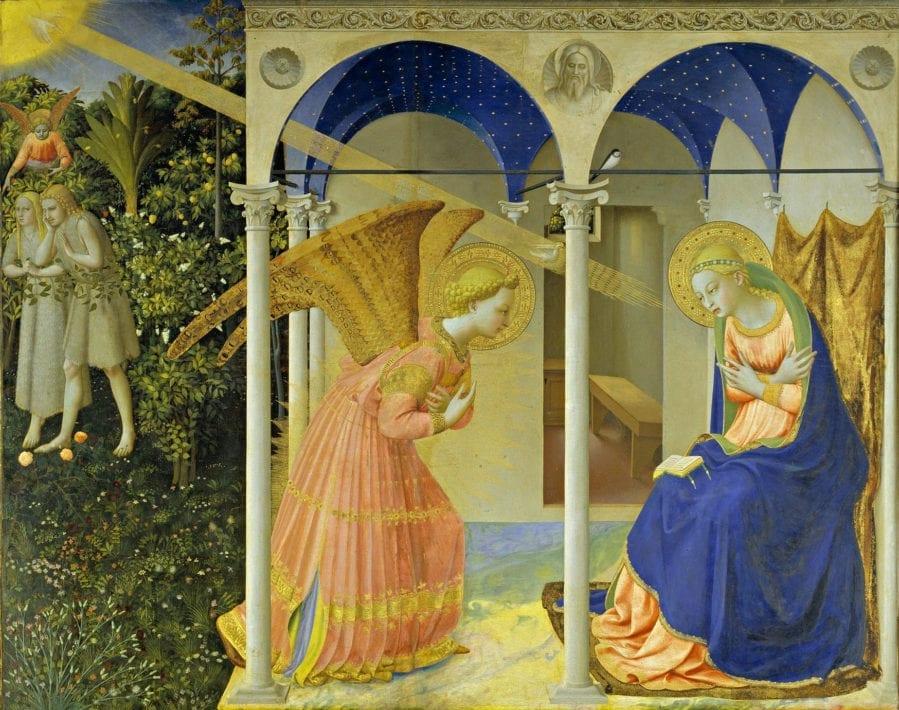 The Annunciation portrays a critical event for Christianity. Keeping that in mind, painter Fra Angelico uses a golden laser beam to direct viewers’ eyes. He wants us to see this scene in a super specific way. Angelico also uses rich colors, details, and lots of glorious gold. So, it’s evident something hardcore is going down. In fact, among Christians this is THE event.

Listen to the podcast version with a click here.

Italian painter, Fra Angelico remains one of very few canonized artists. That means in the eyes of the Catholic Church, he’s a saint. Nothing’s more Catholic than sainthood. So, this guy was the real deal. He didn’t consider The Annunciation a mere story. To him, it’s fact that the angel Gabriel told Mary she was pregnant with God’s baby. He believed in it 100%. The depth of Angelico’s faith shoots through this work. It works like the laser beam of light that strikes Mary in the painting.

This sunbeam represents the Immaculate Conception. It’s the big miracle that launches the Bible’s New Testament. Another way Fra Angelico shows the significance of this event lies in the garden. He portrays another major angel. The Christians refer to these alpha angels as “Archangels”. This one, Michael, guides Eve and Adam from the Garden of Eden and into the unknown world. That scene signifies the big whoops of the Old Testament. It’s where we went wrong as human beings. So, the duo look bummed for good reason. They’re in trouble.

In fact, they carry the weight of all human sin on their backs. Fra Angelico’s The Annunciation even gives them bad posture to remind us of this. He also paints them a lush and wild garden. It was so rich and bursting with fruit that peaches popped out onto the grass in front of Eve and Adam. We don’t know what lies ahead for the pair. It’s not in the painting. But angel Michael’s grim expression and bowed head signify empathy. The duo appear bewildered and concerned at best. In fact, their faces parallel Mary’s on the other side of the painting.

Can you blame Mary? After all, she just found out she’s carrying God’s child. That’s major pressure. Plus she didn’t even get to experience physical love first. At The Annunciation Mary was a virgin – remember? So, the notion of childbirth is scary enough. Back then it killed a lot of women. Tack on the responsibility of bearing the child of God. This is the facial expression that follows. Of course, while Gabriel’s still there she’s going to be grateful and honored and say all the right things…

Her head bows to honor God and the experience. She’s responding as any dutiful woman would. But Gabriel’s foot and wing sit outside her enclosed area. He’s leaving pronto. Mary will soon be alone in her enclosure. She’s trapped – not going anywhere. Her physical, spiritual, and emotional life are forever altered. In fact, that whole idea of having a life flies out the window as soon as Gabriel does. Mary’s secluded now into THE spiritual life.

She’s no longer a woman of the world. So, her journey in this painting reflects the opposite of Eve and Adam on the other side. They are only now becoming people of the world. She’s moved up a level. Mary’s no longer of this world. Her body is no longer just a physical experience. She’s got God in there. Mary’s life shifts into something other than human. She’s become a spiritual being.

It’s beautiful and a miracle. That’s certain. But it’s also isolating. She’s the only one who will ever go through this. All the sacrifice inherent in her situation resonates in this painting. According to scripture, Mary didn’t just give birth as a virgin. She died as one too. After The Annunciation, her body no longer belonged only to her. Mary became a living vessel of God.

Fra Angelico represents the power of this with gold throughout the painting. It’s a visionary experience unlike any other to see this painting in person. The gilding glistens and captures the eye. It’s luminescent. Gabriel holds our attention longest in this portrait. He’s positioned center stage. That’s because he’s the happiest subject of the painting. Not only does his work please God – he’s finished with it. Mary, on the other hand, is just getting started.

Why did Fra Angelico paint The Annunciation?

Cosimo de’ Medici was a rich and influential contemporary of Fra Angelico. He rebuilt the Convent of San Marco in Florence, Italy. Medici then commissioned the esteemed painter to cover the walls with intricate frescos.

What does The Annunciation painting mean?

Fra Angelico’s is only one of many paintings depicting The Annunciation. It’s such a popular subject because of the story it tells. Without question, it’s the inciting incident of Christianity. The angel Gabriel delivers the Immaculate Conception to Mary. This represents the kickoff for the Bible’s New Testament.

What is Fra Angelico known for?

Fra Angelico was one of the most renowned painters of the early Renaissance. But he was also known to be quite a holy man. His work reflected this serene lifestyle. In fact, after death he was canonized as a saint. Many writings of his contemporaries in the 1400s describe Angelico as if he had a halo.

What medium did Fra Angelico use?

ENJOYED THIS The Annunciation  ANALYSIS?