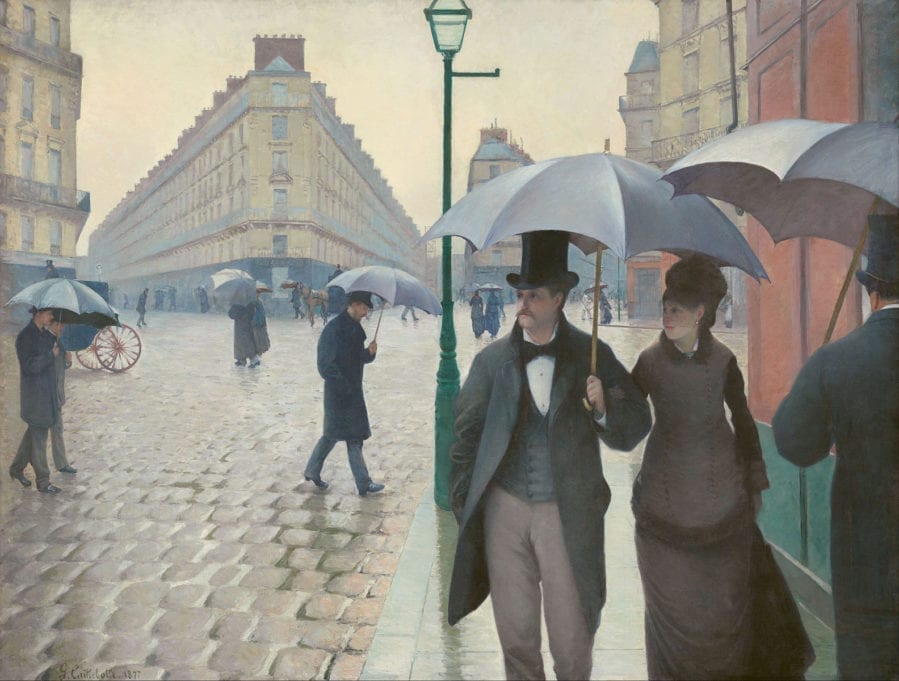 The painting Paris Street; Rainy Day snapshots a beautiful moment on a typical, even dull, day. French painter, Gustave Caillebotte titled this Rue de Paris Wet Weather – a simple name. Its plainness points to the piece’s subject. He gives us a slice of life. It’s an unromantic, realistic painting during peak Impressionism. At the same time it captures 19th century Paris with a fresh allure.

Listen to the podcast version below:

Faces lack expression. Clothes belie the formal 1800s drab design. The weather stinks. Yet this portrait reminds us that Paris is magic. It’s a wonder of simplicity. Wet cobblestones shine under a jaunty green streetlight. Shadows play on their surfaces. Top hats and bow ties saunter in every direction. Each person carries an umbrella. Bodies relaxed, they take their time.

That’s like Caillebotte himself. His precision and care shine through this work. The result gives us a bright, clear view on dreary, cloudy day. Original and of-the-moment, this masterpiece echoes with timeless beauty as well. He works this magic with precision. Caillebotte’s deft portrayal of the Paris street on a rainy day works through realism. It endears the viewer to a particular place and time. But not because it’s a special time and place.

Rather, his rendering makes this foreign place and long ago time familiar. Gustave gives us a matter of fact scene. Yes, he was an impressionist at the height of that period. But for this painting, Caillebotte chooses to be realistic. That’s what works best about this piece. As a result, it feels tangible even today. Thanks to the realism, it’s easy to feel part of a scene like this. We’ve all wandered a rainy street, shielded by a boring black umbrella – numb and oblivious.

It’s a universal mood – the rainy day blues. They aren’t debilitating. But moody phases can obscure the beauty around us. Cranky casts a long shadow. That seems to be the point of Paris Street; Rainy Day. It reminds us to look around and see how blessed we are. In fact, some rainy days can even be lucky. For instance, these fortunate pedestrians. Everyone remembered their umbrella. They’re all well dressed… and they get to live in Paris too. It’s a luckfest up in here.

In fact, as a modern viewer it’s striking how lovely this apparently banal experience feels from our far away position. This dank and muggy day somehow also seems beautiful. The painting of a Paris street on a rainy day works like sunlight. It’s a refreshing look into a particular moment in the past. That’s how we know this painting’s a masterpiece. It transports viewers through space and time – across continents even. And we’re happy even though it takes us to a rainy day walk with a black umbrella we’ve all got. That’s because Caillebotte makes it worth the trip.

Where can I see Paris Street; Rainy Day in person?

The painting resides in the permanent collection at the Art Institute of Chicago. The address is 111 South Michigan Avenue – Chicago, IL 60603 in the city’s Grant Park. One of the oldest and largest art museums in the US, this one’s packed with paintings worth the trip.

Where and when was Paris Street; Rainy Day painted?

The overarching structure in Paris Street; Rainy Day is the Place de Dublin. That building faces the painting’s viewer from the eastern side of the Rue de Turin. Caillebotte painted it in 1877 at the height of Impressionism. Rue de Turin exemplified a happening neighborhood at the time. It was a newly renovated area of Paris.

Why do so many say Paris Street; Rainy Day is an Impressionist painting?

It’s a style of painting and a significant art history period. Many also use it to describe painters, as in – He was an impressionist. If you look at Paris Street; Rainy Day as an individual painting, it’s done in a realistic style. But it was painted during Impressionism and by an Impressionist. An art history student might prefer an essay question over multiple choice for this topic.

Why did Impressionist Caillebotte paint Paris Street; Rainy Day in such realistic fashion?

Of course, we can’t really know what Gustave Caillebotte was thinking. But Paris Street; Rainy Day does give us some clues to his thought process. For instance, the people in his painting get sharper and clearer as they come to the foreground of the piece. This works like a photograph. People in the background are blurrier just like a camera would capture them. So, it seems that Caillebotte wanted to reflect a snapshot of reality with this painting.