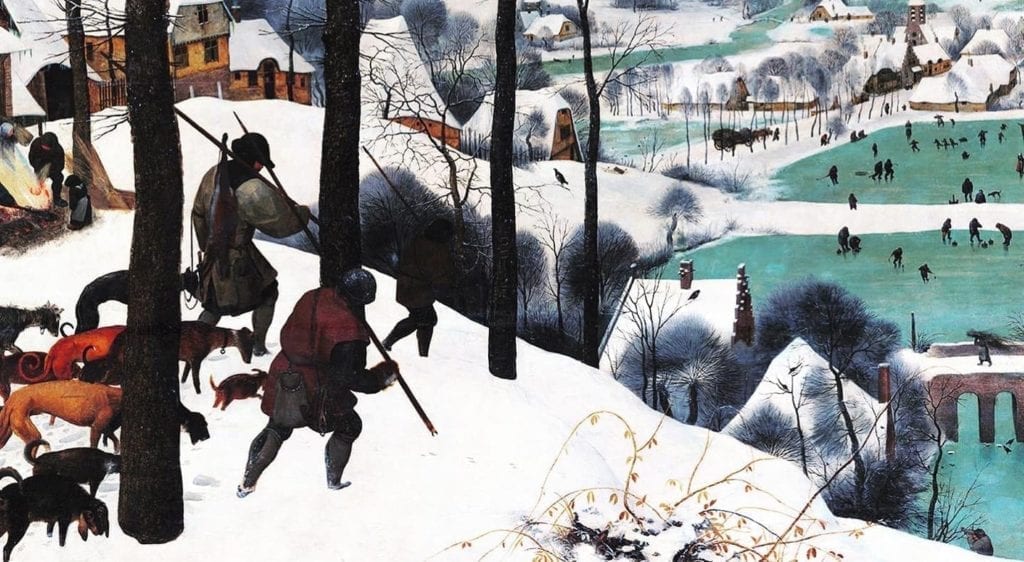 Clarity and purpose shine through Hunters in the Snow by Pieter Bruegel. Its sharp cold bite make this more than a landscape. But on the most basic level it’s one of the best landscapes ever. More than technique, Bruegel creates suspense and drama. He tells stories while holding us rapt in crisp beauty and detailed action. The chilly verity of this day reaches out to us. It’s a shiver delivered through oil on a panel – all the way from 1565.

Click below for the audio version of this piece.

Preoccupied peasants stoke a fire. Hunters in the Snow lurk. Skaters play. Workers toil. It’s a bright, sunny, and cold-as-ice day lakeside. White mountains loom on the horizon beside idyllic cottages. They represent possibility. Their far away eminence holds us spellbound once our eyes travel back to them. But up close the daily bothers of hustle and toil take our attention instead.

This painting starts from the present – at the front of the work – where we stand as viewer. The peasant workers and hunters here represent everyday survival. They fight to keep warm and feed their bodies. In contrast, a bright future lies in the promise of that perfect village at the back of the painting. These characters can’t touch it yet. So, it’s intangible to them today. But they may have the chance to live there someday. While those powerful mountain peaks and the pristine valley life can only be a dream to us, the viewer.

Diving Down – Hunters in the Snow

Pieter Bruegel’s a landscape master. We know this from the painting’s clarion vision of time and space. It transports us into this snowy place. In fact, the work feels like that keen moment before jumping. We’re at the top of a deep diving hill. The Hunters in the Snow stand poised, guns and spears at the ready nearby. Their scrawny dogs bend down in dutiful sniffing postures. We can feel their hunger. The hunters also seem burdened and beat. Hard work lies before them with that sharp incline and after. All are at the helm of this magnificent hill – prepared to pounce.

The landscape feels open with bountiful potential. This contrasts with the painting’s figures. Bruegel’s nickname was “Peasant Bruegel”. But he was a sophisticate himself. The alias came from his paintings. Though a master of landscapes, he obsessed over peasants. Their fatigue and the hope inherent to their lives especially. That’s evident in the positioning and stance of the Hunters in the Snow peasants.

People in the painting seem small and weak – laden with the weight of hard work. Even the skaters seem confined to their tiny patches of ice. They aren’t raising their eyes to the glory of the mountains above. These peasants stick to business. It’s about what’s right in front of them – the ice, the snow, and the job at hand. The constricted, constrained portrayal of their bodies tell us this. They’re tiny and tight, dark figures – bound by their environment. In fact, the only free figure in the piece flies above all this – the bird.

The only faces we really see in this painting are the mountain slopes. Snow falls down their backs like flowing hair behind far away open faces. This contrasts with the hill at the front of the piece. We can’t even see what lies right below us. The Hunters in Snow encounter this mysterious plunge too. It’s a faceless challenge they must overcome to get the job done. It’s no wonder hunters aren’t looking at the peaks reaching into the heavens before them.

We may want to shout at them to look up at the mountains. Hope awaits there. But these guys are proper occupied. They’re about to dive into the unknown. In this way our hunters are far more impressive than those mountains. It’s brave to step into mystery with only a pack of skinny dogs and meager means to guide you.

Hunters in the Snow – FAQs

Who commissioned the Hunters in the Snow painting?

Hunters in the Snow was part of a series of landscapes called “Twelve Months”. They covered each month in a year. Antwerp banker Niclaes Jonghelinck commissioned this entire series from Bruegel.

What is the purpose of the painting Hunters in the Snow?

As part of the series “Twelve Months”, this painting most likely represented January. But on a deeper level the purpose of the painting seems to challenge the viewer. That’s because the work puts us off balance a bit. It sets us atop a precarious enigma of a hill. Then the painting leaves us to wonder about the plunge ahead.

How many nicknames did Pieter Bruegel have?

Pieter Bruegel had at least two well-known nicknames. Many called him “Peasant Bruegel” because he loved to paint peasants so much. But he was also known as Pieter Bruegel the Elder.