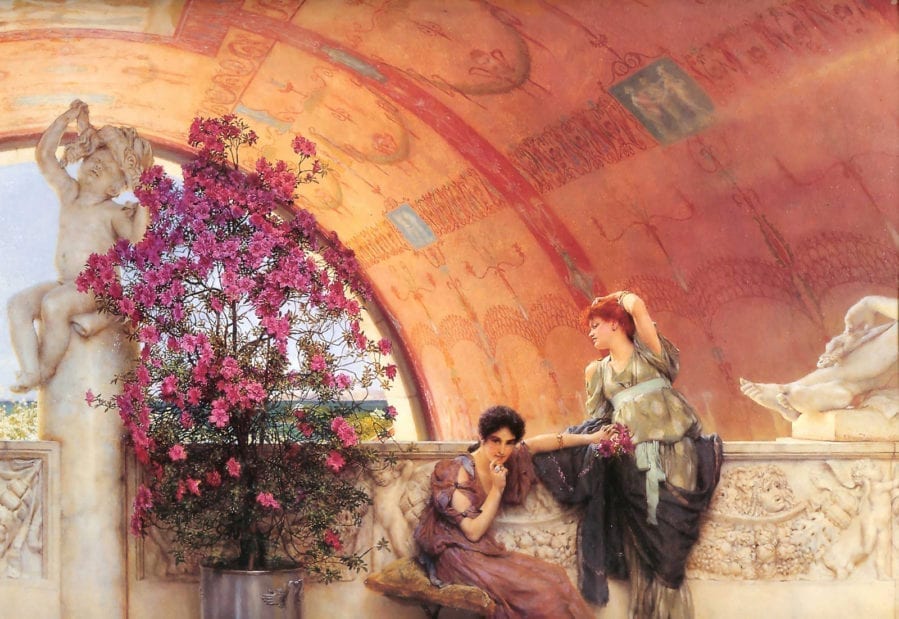 Cupid’s off to the side in Alma Tadema’s painting Unconscious Rivals. That’s because love plays a mere supporting role in this portrait. But pay no attention to the title, it’s not about rivalry either. This painting celebrates friendship. The fantastic pink tree blossoms show us this. They sprinkle the feminine wiles of whimsy, fun, and beauty into the piece. A Cupid statue leans into the painting’s left side. He’s relaxed and, it’s clear – not at work. This painting’s not about old school romantic love. Cupid’s got the day off.

Listen to the audio version with a click below.

On the right are the feet of a prone gladiator statue. This guy’s not in the picture either. He’s not only absent because he’s made of marble. Gladiators represent meaningless machismo. They’re pool boys of the past. Gladiators played out pointless entertainment in Imperial Rome. So, with this gladiator statue off to the side, we know this work speaks to something deeper. It’s not about the boy toy in the background. This work ventures all the way into the unconscious.

Beyond Cupid into the Conscious

The painting’s about these two beautiful women. They clasp hands. It’s a meaningful grip. In holding hands, they also hold the magenta blossoms. These bright blooms symbolize their connection. That’s where the brilliance of this piece lies – their bond. Many art historians claim the painting’s title points to the source of their unconscious rivalry. Sir Lawrence Alma Tadema certainly hints about this in the work too.

Sure, there may be a man behind these ladies. Or it could be that an indifferent Cupid and the absentee boytoy only imply a lover for these ladies for show. He may not be real. What is authentic, though, is the connection between the women. They are certain friends, holding hands. It’s funny in a way, this portrait of friendship. That’s because Alma Tadema loved to romanticize. He portrays these Unconscious Rivals through rose-colored glasses for us.

The joy and beauty in this painting lies with the platonic certainty of friendship. It’s the conscious truth that’s present in the work. The tangible link between them lies at the heart of the painting. In fact, the way these women stand close creates a few heart shapes as well. The soft folds of their gowns and body curves help make these forms. The hearts lie in our unconscious, like the rivalry of the painting title. They’re hidden. But still there. Many believe these women are in denial of their rivalry. So what if they are? That’s silly gossip. What matters is apparent and in the moment between them.

These ladies lean toward each other. They bend into a shared heart. That’s at the core of this work. So, without a lover or even a man, Lawrence Alma Tadema still gives us romance. This one romanticizes buddies. It’s often said that this duo-in-denial is waiting. Perhaps they await a lover. But even so, there’s already love between them. In fact, friendship is the love that lasts forever. And it doesn’t make you wait.

Is Lawrence Alma Tadema a British or Dutch painter?

What kind of painting is Unconscious Rivals?

Unconscious Rivals sets a primo example of Lawrence Alma Tadema’s work. Its romantic tone and coloring came from a trip he took to Pompeii in 1893. In fact, he modeled the statues after photographs from Roman museums. So, Unconscious Rivals exemplifies romantic painting.

Why was Lawrence Alma Tadema called a “marbelous painter”?

Hard to believe but Alma Tadema wasn’t always a champion painter of marble statues. Early criticism of his renderings pierced the painter’s ego. So, he worked hard to perfect his marble statue portrayals. Lawrence did this with such expertise, he thus became known as a “marbelous painter”. Unconscious Rivals shows a perfect example of this.

How did Dutch Alma Tadema get special denizenship as a British Painter?

In 1873 Queen Victoria made Lawrence Alma Tadema and his wife the very last British Denizens. That means they pretty much held the rights of British citizens. But they weren’t true citizens. This honor was thanks to his celebrity success as a Victorian painter. The Queen was a huge fan of his romantic style.