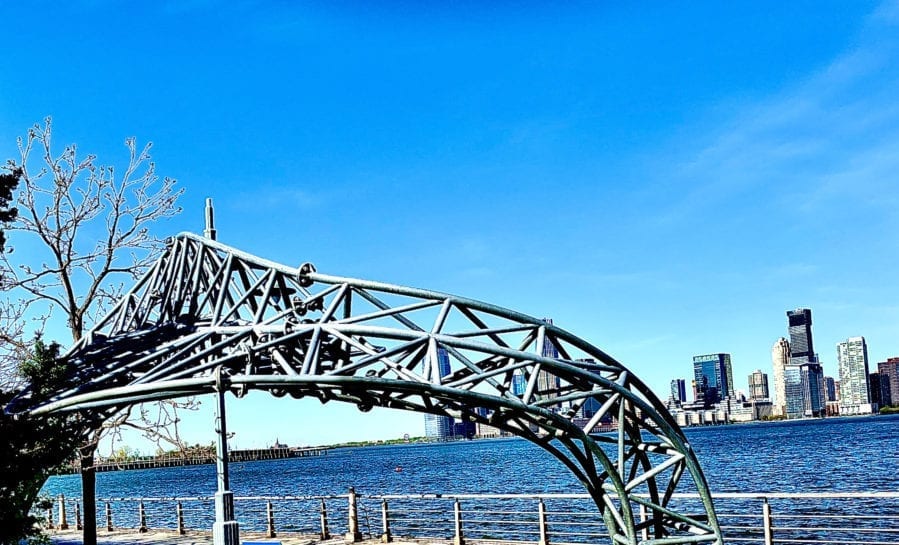 Marc Gibian’s Serpentine Sculptures bring whorling steel tendrils to the Hudson River Esplanade. These three structures are Twister, Offshoot, and Torque. The former two work like shelters. But most passers by prefer to hang and pull-up on them. Nevermind the blaring signs begging them to stay off. The latter, Torque, represents a love seat. It’s forged with galvanized mesh – as all true loves are.

Running North on the Hudson River Esplanade leads you first to Torque. It’s the chillest shape of the trio. While the other two rise as vigorous waves overhead, this one resonates with a calm stillness. It’s the mellow sibling of the three. But there’s a wavy element to its steel form too. Unlike the other two Serpentine Sculptures, Torque keeps its waves close. It’s a subtle seat. The others hover above. This one lies low – the humble bro.

Marc Gibian’s works belie tensile strength and organic tensions. He arouses these themes with handiwork and mighty metals. In fact, Gibian transforms industrial materials into soft, curvy forms. It’s a power move from heavy metal welding into art. That’s why these massive steel structures feel like a natural part of a river walk. Many pass by without even noticing them. Others think Torque is a seat. It’s comforted many weary bottoms over the years.

But it’s not a literal loveseat. Like the other Serpentine Sculptures, Torque‘s a true work of art. It feels welcoming. So, people jump onto it without thinking. That’s a lot like love. We bound into it before considering what, in reality, lies ahead. Part of that is the environment. The Hudson Park Esplanade teems with runners, walkers, bladers, and boarders. We’re all in a hurry. There’s not much meandering. It’s not your typical art space. That’s certain.

In the Offshoot picture above you can see the signs. They tell us not to hang on the Serpentine Sculptures. Still, it’s all anyone wants to do. The NYC Parks Department planted native trumpet vines at this sculpture’s base. That was for fortification. Did it help? We’ll never know. If this sculpture falls it’ll be a rebellious climber’s fault. After all, no vine can prevent these interlopers.

I love Offshoot because the whirling steel branch reminds me of a rhizome. That’s an underground shoot. It grows infinite horizontal stems. They’re continuous like our blood capillaries. Each puts out ever-branching lateral shoots. As soon as one ends a new one begins. Rhizomes are adventitious roots at intervals. That means they’re formed from non-root tissue. This happens in normal conditions as well as a reaction to stress – like flooding. It’s a plant root survival instinct. A Rhizome represents hope rooted underground.

Offshoot juts out with jaunty confidence. It’s an above ground hope beacon. No matter how many sportos hang from her, she prevails. Her tail lifts to the sky. She’s not a mere branch. Like the other Serpentine Sculptures, she signifies possibility – a fresh steel blossom. She’s a promise. The city lies behind her on the East while the glorious Hudson River waves flow to the West. This sculpture seems to wave to us too. Offshoot sends out a message to go for what you want. Ignore the interlopers. Keep reaching.

Twister represents the Serpentine Sculptures alpha. It dominates. In fact, this is the most forward of the three. It’s hardest to miss. That’s not only because it’s the biggest. Steel bends at 27 and 18 feet in its largest places. This twist shouts to the sky. It’s loud and proud.

Much like Offshoot, Twister seems irresistible to pull-up bandits. I see a climber on this sculpture almost every time I pass. They hoist themselves with big smiles. Art does that to people. It moves them. In this case, it’s a bit ironic. Twister‘s meant to move their emotions only. Instead, they move all their matters, body and soul. It’s a perfect marriage between artwork and impact. American artist, Marc Gibian brings out the rebel in all of us with this enticing sculpture.

That’s because this Serpentine Sculpture’s moving itself. The twist in its middle resonates like an M.C. Escher drawing. We see ourselves climbing those ever whirling Escher stairs. So, it’s no surprise people want to climb this twisty beast. In fact, this sculpture’s a bit of a tease. It’s like an invitation to climb. It beckons to children, jocks, and lovers trying to impress – “Jump aboard!”. So, they do. Nobody else stops to read the signs. Only art nerds like me.