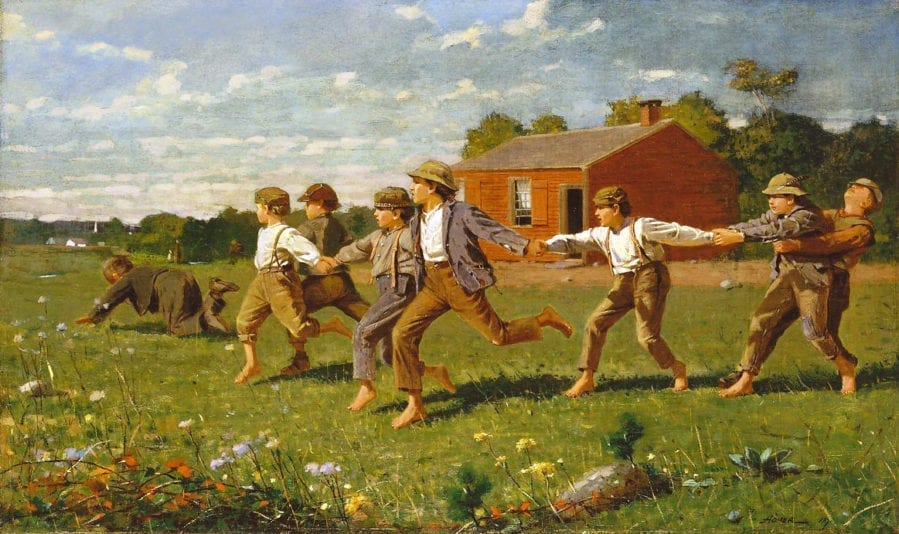 Winslow Homer’s Snap the Whip delights in joyful nostalgia. No matter the life we’ve led, at some point we all had a moment like this. These scampering bare feet sing to us of freedom. After all, nothing feels like liberty as much as grass between the toes. This painting’s one of Homer’s most famous and familiar for good reason. It taps into deep archetypes and experiences in the recesses of our universal past. We’ve all been kids playing outside.

Listening your thing? Click below for the audio version.

There’s a gleeful anonymity to the boys. One is about the same as another. They don’t yet carry the responsibility that comes with striking out as individuals. It’s a way of showing how it feels to live in the moment. These boys are wringing every bit of frolic out of the day. Playing Snap the Whip is full blown fun. That’s living to the fullest. No matter how much adults seek it, kids do it best. It’s the blessing of youth – carefree camaraderie.

The Little Red Schoolhouse symbolizes opposite ideas of Americana. Some think of it as an idyllic past, much like in Snap the Whip. This point of view embraces the simple past. School was in one room. Everybody learned together. It’s a small town vision of American history. Many think of this as rural virtue. You behaved well because everybody knew your business. Naughty folks got town-square shamed. For most, that notion was enough. They stayed in line.

That went for kids too. Corporal punishment ruled in those days. It meant dunce caps and facing the corner. But most memorable and shocking were the beatings. Teachers rapped knuckles with rulers and bottoms with switches. This was often right in front of the class. So, there’s a dark side to the nostalgia of Snap the Whip too. That’s why the Little Red Schoolhouse symbol has different interpretations.

Small Wonder: The Little Red Schoolhouse in History and Memory explores these. America straddles a fence of nostalgia. The book, by Jonathan Zimmerman, points out days-of-yore longing. But he also writes about the inefficiency and low standards in those days. Most Americans can get a better education now. Students are not lumped together. Classes group by age. That wasn’t possible on the prairie.

Still, nostalgia has a place. It’s not a practical one, though. When we yearn for a simple time, it’s more about small things. Small town rural virtue speaks to kindness. It’s about respect. Love thy neighbor. All that jazz. These boys in Snap the Whip are playing. The game is easy fun. It’s not zapping aliens or shooting zombies on a computer screen. The worst that can happen is likely a grass stained knee. This masterpiece sums up that nostalgia side of the fence. The schoolhouse in the background sits way back for a reason. It only complicates matters. This painting’s about the boys and their joy.

What’s the Snap the Whip game?

Also known as Crack the Whip, this outdoorsy game has no winner. It’s ideal for a small group of children on grass. A leader takes charge at the head of a chain of kids clasping hands. This lead child then runs in random directions. This is like the snap of a whip. It makes the chain wiggle and whirl. So, children on the end fall off the chain into the grass. Anyone can rejoin the chain and take lead when they feel like it. Thus, there are no true winners or losers.

Where can I see Snap the Whip in person?

The painting currently resides in the Butler Institute of American Art. This was the first museum dedicated only to American art. It’s located in Youngstown, Ohio. The address is 524 Wick Avenue.

Who was Winslow Homer?

A renowned American painter of the late 1800s, Homer loved to work in oil and watercolor. In fact, he was most well known for his landscapes and watercolors. These later works often revolved around the marine life near his final home and studio in Prouts Neck, Maine.

Where is the Winslow Homer Museum?

Winslow Homer’s studio in Prouts Neck, Maine serves as a museum for his work. In fact, they renamed the road to Winslow Homer Road to honor this esteemed artist and his role in American art history. It’s now a National Historic Landmark and run by the Portland Museum of Art.

Enjoyed this Snap the Whip analysis?