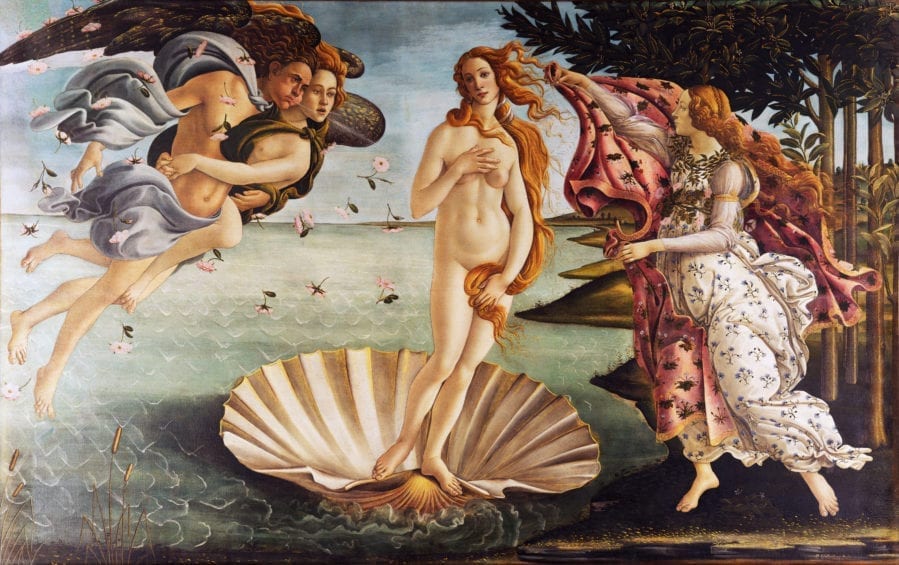 Birth of Venus serves up instant recognition. We’re all familiar with Sandro Botticelli’s masterpiece. Still, have we really looked at it? It’s a birth. That’s messy, baby-centric, business. But this portrait shows neither mess nor baby – only beauty. There’s simply the wonder of new life present here.

In fact, the work arouses more questions than it answers. How is a full grown woman arising out of this clean and still seashell? That’s not how Venus was born. She emerged from the wrecked genitals of her murdered father, Uranus. But there’s nothing about that here.

Love to listen rather than read? Click for an audio version below.

Instead Botticelli blows Zephyr breezes through supermodel hair. Still, there are references to this coverup. Look at the nymph holding up a flowery silken covering for Venus. She knows what’s up. This lady needs to hide herself pronto. Society at the time of this work was like today’s Instagram – no nudity allowed. Venus covers herself with a modest hand gesture. She’s somehow both naked and pure as only Botticelli can portray.

Much like a newborn, unfettered Venus appears innocent. Her expression rises above her shell-bound circumstance. That’s thanks to Goddess stature and her eager helpers. They attend to Venus. Her placid features stand out next to anxious Zephyr and his companion, the nymph Chloris. She clutches him tight. So, the flowers she brings Venus fall in a flurry of wind and Chloris’s face registers surprise. The nymph with her silky cloak also seems serious and focused. Venus remains the only one without a care.

This portrayal points to God and Goddess role in the lives of myth makers and believers. They’re meant to explain things. Venus, for instance, explains many facets of womanhood. She stands for love, beauty, prosperity, fertility, and victory. This lady’s a winner. But Venus arose from the ultimate symbol of failure – her father, Uranus’s chopped off genitals. Thrown into the sea as a sort of blood and semen ceviche, his tragic member foamed into a pure Goddess. She arose like a bombshell phoenix from his epic fail. It’s an unforgettable origin.

Yet Botticelli forces us to forget it with this work. That grotesque start can’t occur in the face of such beauty. It seems impossible – a spectre of fake news. Thus, we the West Wind God Zephyr blows these cares away. There’s also the dandy nymph. She hovers with an elegant cloak to shield us further from the situation’s truth. Birth of Venus thus serves as the ultimate Italian master work of spin. It’s beyond beautiful. Too perfect to be true. That’s what makes this a masterpiece.

Why is the Birth of Venus important?

Sandro Botticelli painted it between 1482 and 1485. Now, it defines 15th century Italian painting. The work features technical mastery and rich allegory. In particular, it refers to Ovid’s Metamorphoses and the Roman myths of Uranus and Venus.

What’s the story of the Birth of Venus?

Venus was born of sea foam. Uranus, her father, had his genitals cut off and tossed into the sea. This created a frothy fertilization for a Goddess. She arose like a surfer on a seashell. The West Wind God Zephyr blew her forth and into being.

Where can I see the Birth of Venus in person?

The painting currently resides at the Uffizi Gallery in Florence, Italy. The address is Piazzale degli Uffizi, 6, 50122 Firenze FI, Italy. This is only steps away from the cool Vasari Corridor. It’s a bridge, Medici art gallery, and corridor all in one. If you love self portraits, this exhibit’s a life-changer.

Who is the woman in Birth of Venus?

Simonetta Vespucci modeled for many Sandro Botticelli’s works. An Italian noblewoman, she was declared Queen of Beauty among Florentine painters during the Renaissance. Botticelli loved to paint her.

ENJOYED THIS Birth of Venus ANALYSIS?