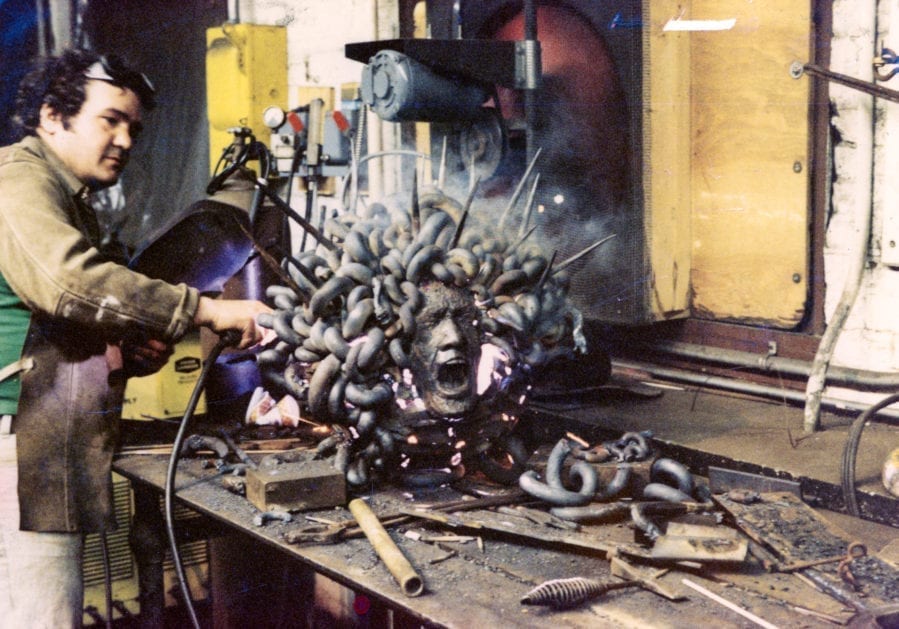 Michael Malpass was most well known for his intricate and glorious spheres. He’s an orb master. Malpass works often intertwine mechanical parts or shiny shapes. He spotlights machinery, plumbing, and metalwork. His work’s got a hardy, masculine vibe. But thanks to the artistry of Michael Malpass, these aren’t just tough guy orbs. There are tender parts too.

Listen to the podcast version with a click below.

Intriguing contradictions infuse the art of Michael Malpass. His work exemplifies many complex themes. His pieces often wrap significant details into sculptural spheres. For instance, Screaming Medusa stands out among his thematic works. It’s a powerful shriek of a sculpture. That impact radiates from the piece’s screaming face and fierce snake mane. She presents a complicated, dramatic Medusa head. So, this work’s a bit more figurative than orb in nature.

Michael Malpass twisted mechanicals and wrapped pipes into the scarlet sphere Red Dawn. That sounds heavy. He crafted this by welding steel parts with a blowtorch. So, it’s not the light and playful fun ball it appears to be. There’s weight to this red beast.

The title also bears a burden. Malpass created Red Dawn in 1990. That’s about six years after the war movie. It’s a dark tale of communist domination. The term has other uses too. But all have a dark resonance. From a military operation to impending rocket attacks. So, why does this piece feel like fun?

Malpass brightens it with more than color. Playful shapes wind through Red Dawn. This sculpture could decorate a playground and look right at home. The book about Michael Malpass Humdinger gets its title from his use of the word. He said that when a piece was finished, that it was a Humdinger. This means as good as it’s going to get.

One sign of a true artist is that they know when to stop. This certainty makes Red Dawn outstanding – its completion. The circle speaks to us as a complex whole. It’s a delightful red ball and a dark dawn all at once. Much of American artist, Michael Malpass’s collection works this way. It weaves together contradictory elements. They become a true unified whole. Viewers discover something new in each artwork.

Check out the video below for examples of his meticulous handiwork. They’re each distinct and exquisite on their own. But when you look at them exhibited together in the video, there’s even more to them. It feels like wandering through worlds. Each sphere could represent its own planet in a universe of one man’s creation.

Of course, Michael Malpass crafted many non-spherical sculptures as well. The most powerful example combines an orb with a figure. His Screaming Medusa presents the famous female monster at a ferocious moment. It portrays a monstrous woman. But this piece still forms the shape of a sphere. So, it’s not far off from his signature orbs. The Medusa shares a deeper set of feelings, though.

Snakes are significant, universal symbols. They’re a masculine, phallic shape. Plus snakes are poisonous predators. That’s a lot of male energy wrapped into one stealthy slender animal. Michael Malpass filled this sculpture with a mass of snakes. It gives the work a writhing, organic sensuality. The feeling’s also a bit creepy – as if one might slither out and get you. These snake bodies are so smooth and singular – they seem real. It gives the sculpture a life-like quality. Because it’s portraying a monster, this makes it scary too.

Medusa frightens with her fury. She’s an archetypal character – an icon of female rage. In her story, the terror Medusa invokes lies in her eyes. To meet her gaze means you’ll stay frozen forever as a statue. Your blood turns to stone from looking into the eyes of this woman. Her eyes aren’t what makes Medusa a monster, though. They give her power. But the snakes give her that crazy-combo monstrous quality. Michael Malpass makes them writhe with such truth – we can almost hear the hissing.

There’s a sense of movement to Screaming Medusa. We’ve all seen hyper-realistic figurative sculptures. But the way this one might come to life feels different. It’s motion fights with reality rather than representing it. The monster’s wrath reaches out to bite the viewer. We feel her pain. It’s not compassion in this case. It’s fear. This woman wages war with our empathy. Just as in life, Medusa frightens viewers with her death.

Many great artworks challenge us with the face of death. With Screaming Medusa Michael Malpass presents monstrous mortality. This sculpture shows her at the moment of her beheading – certain death. In fact, Medusa was the only mortal in her Gorgon sisterhood trio. Classical scholar Jane Ellen Harrison once said of Medusa, “The Gorgon was made out of the terror, not the terror out of the Gorgon”. So, the monster’s origin lies in fear itself. Seeing as how Medusa was mortal, her essential fear lies in this moment of death.

It’s not obvious in Screaming Medusa but Malpass used his own face for the sculpture. In fact, this represents his second self portrait Medusa. The first held a more placid facial expression. It’s a classic portrayal of the legendary monster. She’s less frightening and more beautiful. That’s because this first piece isn’t about facing death. The original Malpass Medusa’s more about the monster inside us.

But Screaming Medusa presents the mysterious monster to end them all – death. The artist gave this monster his face mid-way through his art career. Sadly, in early 1991 Michael Malpass died at only forty four years old. Knowing this now gives Screaming Medusa even more impact. We already experienced Medusa’s pain of death in the sculpture. But what viewers now also feel is the profound loss of a great young artist. His face contorts with agony in the piece. We feel the aching emptiness from an artist leaving us far too soon.

Sometimes when things are finished, it’s an accomplishment. The art of Michael Malpass shows us this with his artful unity of contradictions. He gives us intricate stories told to completion – all within a metal orb. We see his storytelling artistry in drawings too. Malpass makes us a map and, again, shares his face as part of the territory. The map guides us through parts of his life. There’s Brooklyn and Pratt, where he went to art school, and a tease of the Atlantic Ocean licking the bottom.

Malpass created many beautiful map-like drawings similar to this one. He often included colorful fish, his face, and geography. This one also shows the corner of a $1,000 bill. It seems that he’s meditating on his place in the world. Perhaps these are even a way to map life stories. They have a narrative feel and that same pristine clarity we see in his signature orbs.

Check out more of his artwork at his website MichaelMalpass.com and the Instagram curated by his thoughtful and kind family members.