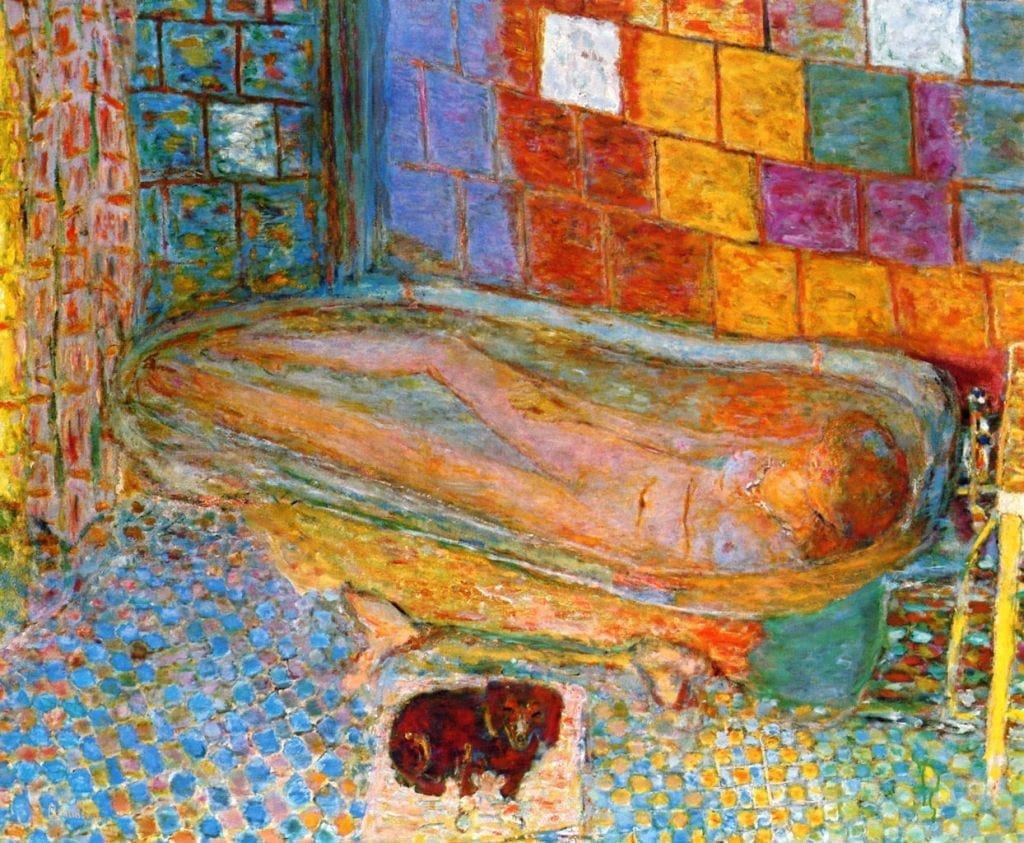 Gossip labeled that star of Nude in the Bath as “difficult”. But Pierre Bonnard delighted in her glorious colors:

Pierre Bonnard painted four versions of Nude in the Bath. It wasn’t an obsession – just routine. In fact, the habit was not even his. Bonnard’s wife, Marthe de Méligny, loved bath time best. It was her favorite self care ritual. She relished hours in the tub. Marthe was not beloved among Bonnard’s friends. She’s characterized as “difficult” and even “neurotic” in writings from the time. It was well known that baths served as her sanctuary.

Listen to the podcast version with a click below.

Bathing’s a retreat to the bare naked self, after all. But naked isn’t always sexy. Even though this portrays a nude woman, it lacks sensuality. In some ways the figure seems flat like a ragdoll. There’s a dreamlike fantasy quality to the way she lies in the bath. Méligny’s body doesn’t luxuriate. She sinks to the bottom like a slender stone.

One detail in this particular version stands out from the other three Nude in the Bath paintings. The water here graces Marthe’s neck. To mark the separation between water and air, Bonnard uses bright flecks of light. These brushstrokes simulate jewels. So, it appears a lot like a necklace. This detail grants luxury to the painting, unlike her spare and simple stick-legged body.

Beloved Nude in the Bath

But it’s not the only opulence in the piece. Bonnard pours a treasure chest of color into this painting. It’s so colorful, viewers don’t need to know the actual bathroom was stark white to see this renders a dream. The painter gives his wife a magical bath. This indulgence lies outside the water, though. It’s as if he’s calling her out of Nude in the Bath. After all, she’s in another world there. It’s somewhere between consciousness and sleep. Bonnard paints a color wonderland as if to also show us the reason why Marthe returns to it so often.

Some art historians point to the faceless flatness of her body as a symbol of death. But the dog’s peaceful nap on the mat indicates otherwise. Canines care for their companions far too much for pup to lie in this restful state with a dead mama right there. In fact, Bonnard gave us this dog to show Marthe surrounded by love. She’s got this beloved pooch waiting on her mat. There’s the adoring painter who draws her a color wonderland bath. Serene and still, she soaks without a care. This might be the biggest fantasy of all.

Bonnard honors his wife Marthe with this magical world he paints for her. Rather than concocting the typical portrait of a “beauty”, Nude in the Bath gives her a world all her own. Not all women care about physical beauty. Feeling appreciated, accepted, and loved regardless of how we look is a higher honor. Beauty takes work and even after all that toil…. it still fades. But the true value of a woman lies within.

Pierre Bonnard knows this. He needn’t put Marthe’s face in Nude in the Bath to show us her value. Nor does he sexualize her body. Instead he builds her an enchanting space all her own in Marthe’s favorite place. This bathroom’s like a mini Taj Mahal. It’s hard to imagine a way to honor your beloved’s bath time more than making it into a masterpiece.

Nude in the Bath – FAQs

What was French painter Pierre Bonnard known for?

Bonnard was known to paint from memory. This contributes to the dreamy quality of his work. In fact, this quality permeates the painting Nude in the Bath.

Why are Pierre Bonnard’s Nude in the Bath paintings important?

His quartet of Nude in the Bath paintings broke ground at the time. Bonnard painted them during the period from 1936 to 1946. During this decade it was avant garde to make luminous, fantastical portraits of such a banal setting.

Where can I see Pierre Bonnard’s Nude in the Bath in person?

This particular version of the series was Bonnard’s very last Nude in the Bath. It was painted from 1941 to 1946. Today it’s part of the permanent collection at the Carnegie Museum of Art in Pittsburgh, PA. The address is 4400 Forbes Ave, Pittsburgh, PA 15213.

Is Nude in the Bath an impressionist painting?

This painting may feel like Impressionism. But it is a post-impressionist painting. In fact, it fits more into the avant-garde category. That’s partly because of the sensational take on an insipid setting. It’s also due to Bonnard’s unusual use of memory rather than modeling for the portrait.

ENJOYED THIS Nude in the Bath ANALYSIS?