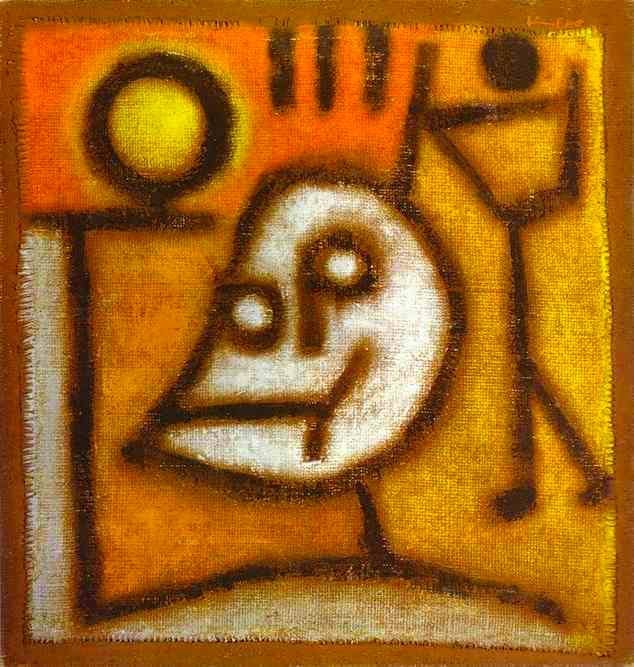 War and death ruled Paul Klee’s life when he painted Death and Fire. Torn asunder by World War II and a seering case of scleroderma – Klee suffered while painting this. His pain shows. Even the skull’s sharp salute feels forced. The way Klee hems the gesture tight into the painting’s left corner creates a cold, robotic vibe. Speaking of subhuman, the hollow man on the far right also feels familiar. He’s like a scarecrow, but with less personality.

Listen to the podcast version of this with a click below.

We know this stick figure symbolizes a person just as we know the line pointing to the skull represents a salute. But both are also empty. They are mere tokens in the face of death’s madness. After all, nothing can stand up to inevitable death and persevere. Death always wins in the end.

In fact, every brushstroke of Death and Fire by Paul Klee speaks to the end of life. From the circle surrounded by fire to the skull at its center – this work’s an ode to tragedy. It’s a contradiction too, though. For instance, Klee paints with an almost childlike style. His heavy lines, and big ideas also give this work weight. That’s how the painting hits viewers with simplicity right at the get-go.

But Klee painted more than 10,000 works before this one. Many were masterful. So, he was far from childlike in technique. In fact, Klee painted this masterpiece in the last year of his life. He crams pain and torment into this painting. Still, it doesn’t seem layered or complex. Of course, death is complex – yet this work points out its inherent contradiction. Death’s also simple on its face. But the fact that it can still seem so elementary here spotlights this work’s greatest achievement.

Death and Fire – More Than a Mood

Abstract expressionist Paul Klee painted Death and Fire as a moody masterpiece. But it’s so much more than a mood. It’s a canvas on fire with deep thoughts, mysteries, and skillful techniques. The smudge and clarity combo makes this work feel like a demon child’s sidewalk chalk drawing. Klee frames it for us twice with his thick and smudgy straight black lines. These ground the work with a stick figure resonance. It’s so familiar …yet still enigmatic.

It works on us with an eerie glow. A muddy green colors the skull’s body. Green often symbolizes life. That’s why this green’s drained down to nearly nothing. It’s almost grey. This moody green/grey straddles color and shadow the same way the work lies between life and death. All the colors in this piece seem more chalky than painterly. This gives Death and Fire an ephemeral resonance to remind us of the impermanence of life.

My favorite part of the painting sits at the top like a crown upon the skull. Three prongs lie dead center in the blazing red of World War II. This stick trinity’s next to the glowing yellow circle – a sun and circle of life. The lines reflect that idea by representing birth, life, and death – the big three. These prongs are the definition of profound simplicity. It doesn’t get more basic than a black line. At the same time a simple dash can communicate everything. That’s how morse code works. In fact, this painting speaks to us in code too. It’s a master work that shouts SOS – a cry for help in the face of war, death, and the pain of being human.

When and where did Paul Klee paint Death and Fire?

In 1940 Swiss Painter, Paul Klee painted Death and Fire to reflect the tragedies of World War II. Before the war he was a delightful and prolific painter. Because of the war, Klee fled Germany, where he’d been teaching. He then returned to his native Switzerland and painted this masterpiece.

Why did Paul Klee paint Death and Fire?

At the time of this work, Klee suffered agonizing pain with scleroderma. He was sixty one, not that old – but still near death. His suffering wasn’t only physical. The horrors of WWII tormented him. Many art historians believe he painted Death and Fire to foreshadow his death. It’s clear he also felt great pain while painting it.

Where can I see Death and Fire in person?

You can see 40% of Paul Klee’s work at the Zentrum Paul Klee. Death and Fire‘s included in this museum’s vast Klee collection. It’s dedicated to the artist and located in Bern, Switzerland at Monument im Fruchtland 3, 3000.

What letters are inside the white skull of Death and Fire?

Paul Klee was teaching art in Germany right before he painted Death and Fire. That’s why it contains the letters TOD. This spells the word for death in German tod. At the time of the painting, Klee loved hieroglyphics. So, he included many representational elements like this into his work.