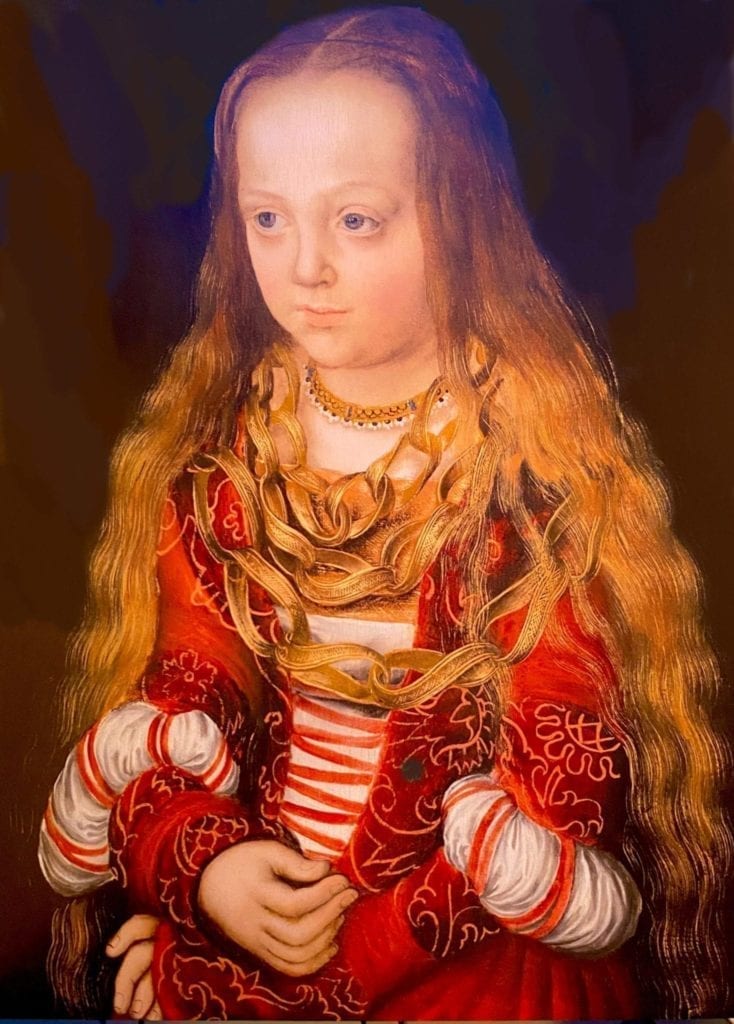 Find out more about the painting A Princess of Saxony such as:

The little girl in A Princess of Saxony seems weird at first. She’s got that impossibly high 1500s forehead. The iconic Queen Elizabeth had one too. As did most lady court portraits in those days. That’s because big foreheads were a sign of intelligence and class in the 16th century. This enormous noggin doesn’t quite suit our princess’s vulnerable young face. It also doesn’t take away from the resonant sense that she’s a child, though. That sets this painting apart from others of its day. After all, many 16th century kid portraits look more like an adult with a child body. Sure, this princess has a strange face. But she’s also the real deal.

A Princess of Saxony portrays a cranky pants child from the year 1517. Lucas Cranach painted this court portrait – a masterpiece of innocence. These types of paintings represented half of his trade. They were for the religious courts of Germanic states. Who valued fealty, purity, and piety. Cranach served up stately elegance like this with those qualities in mind. On the flip side, he also retained many aristocrat patrons. These clients preferred seductive nudes. In fact, sensual portraits were his most popular works at the time. But this chaste portrait of a Saxon Princess holds our attention more than 500 years later. While the appeal of his once red hot nudes cooled off.

Taking a good look at A Princess of Saxony makes it obvious why. She’s no Disney princess. This girl’s got worry written all over her face. There’s no way she twirled out of this sitting and danced into a delightful song. This princess thinks about problems, not princes. In fact, a prince might be her biggest issue at the moment. She’s a kid wearing a woman’s dress. It’s extravagant and regal attire with gobs of gold and jewelry to boot. These riches may seem grand on an adult. They represent wealth and status. But for a child, they’re a burden. Viewers see the strain on this Saxon Princess.

It’s not only in her eyes. Look at those clumsy, nervous hands. She’s clutching at her belly area. An instinctive anxious gesture, it tells us she’s tense. The dress is too much for her tiny body. Her role as A Princess of Saxony also bears down on this child. Notice that she has no name. It’s likely she’ll marry soon and take her husband’s name. That’s how she’ll gain an identity. At this pre-marital stage, it’s all wrapped up in Princess and the fancy gear she wears.

Portrait of a Saxon Princess

Her expression’s the only thing that sets A Princess of Saxony apart as an individual. That may be why her face is so compelling. We can’t know her by name. But we can tell how she feels. Lucas Cranach entitled this portrait without her name. But he also gave us an exquisite gift – her bereft face. She’s a living breathing contradiction.

Nobody wants to feel as she does in this captured moment. Most people likely wanted those dazzling duds, though. Those trappings and her sad eyes contrast deep sadness with shallow finery. Cranach presents this as a package. Sure, playing dress up in courtly regalia seems fun. But the inherent stress of actual court life would bring any frolic to a screeching halt.

The sitter’s anonymity works as a gift today. If she were a historical figure, we could identify her. Then she would no longer be a child. Childhood is what makes her so compelling. She’s human to us. Few 16th century royal court portraits have this emotional rigor. Her eyes feel familiar with their longing. We’ve seen this look on kids gathered around an ice cream truck. She’s not one child. That face makes her every child.

This is a trick of true artistry. It’s one way we distinguish a masterpiece from merely a work of great art. Master artworks often shift microcosm in to macrocosm. They take a specific moment and show us how it applies as a universal truth. Here Lucas Cranach the Elder reminds us of a truth about children. They don’t hide their feelings. In fact, most can’t. No matter how fancy their clothes or how high their standing. Children want things with a desperate need they can’t restrain. It may be a mere ice cream cone. Or it could be freedom from the shackles of child marriage. Whatever it is. They gotta have it.

A Princess of Saxony – FAQs

Where can I see Lucas Cranach’s A Princess of Saxony in person?

This masterpiece graces the collection at the National Gallery of Art in Washington, D.C..With a tagline like The Nation’s Museum, you know the D.C. National Gallery’s got the goods. They don’t disappoint and A Princess of Saxony is only one tiny reason why. Check out their website for rich, textured exhibitions and useful teacher resources.

What makes A Princess of Saxony by Lucas Cranach an important painting?

Lucas Cranach the Elder painted several Saxon princesses. He even did a portrait of three entitled Three Princesses of Saxony. But we can identify most of the subjects he painted. For instance, in the case of the three sisters, it’s easy to find. They were the daughters of the Duke, Henry IV – the Pious.

As with many Cranach Saxon princesses, they’re linked to a male historical figure. But we can’t identify A Princess of Saxony. She’s anonymous. That’s one reason this masterpiece stands apart. Perhaps a single female relative granted her courtly status. In that case, it’s not a surprise that she’d remain a mystery. After all, women without male counterparts are rare in 16th century historical records.

Why is Lucas Cranach the Elder an important painter?

It’s safe to say that Lucas Cranach the Elder was a big deal in the 1500s. His significance during that time crosses cultural realms. For instance, Cranach was a close friend of Martin Luther – during the Protestant Reformation. That’s a lot like being buddies with Martin Luther King Jr. in 1963. Cranach was also a major force for German Renaissance painting.

He held significant political and business positions as well. Lucas Cranach owned an apothecary and ran a publishing firm. He served several terms on the city council and even as mayor of his German town. Cranach still holds the signature the Elder because of his artist sons Hans (c. 1513-1537) and Lucas the Younger (1515-1586). They learned painting in their father’s large workshop. This is where many noteworthy Renaissance paintings and painters originated. In fact, it’s estimated that the Cranach atelier forged more than 400 significant paintings.

ENJOYED THIS A Princess of Saxony ANALYSIS?