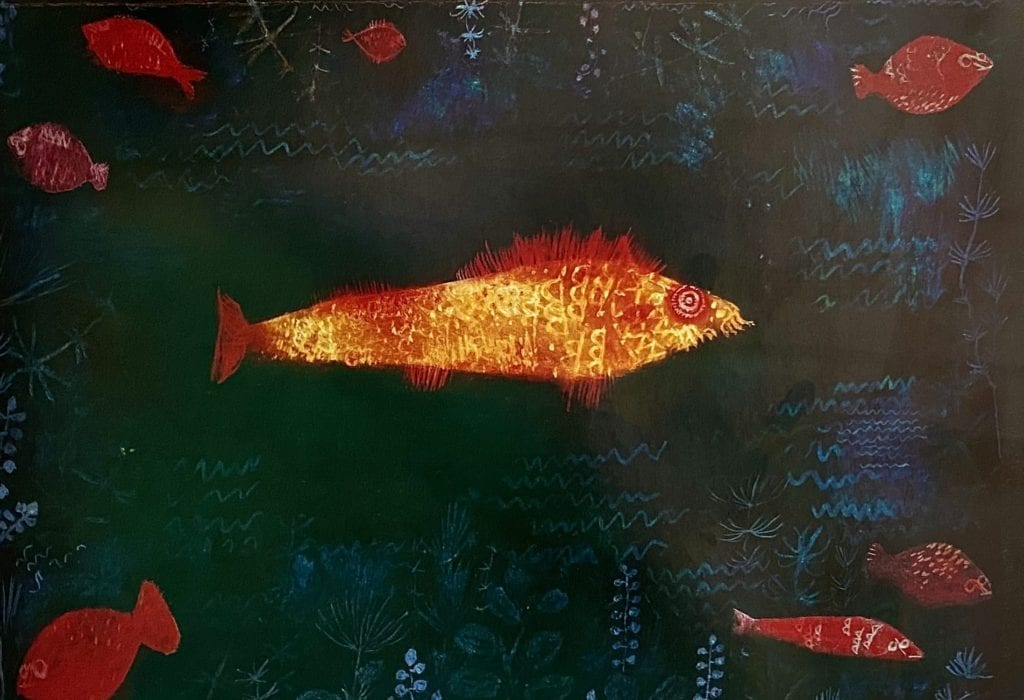 In this analysis of The Golden Fish (AKA The Goldfish) I point to the following:

Paul Klee painted The Golden Fish in 1925. This was a happier time in his life when he taught painting in Germany. He loved teaching and lived a wholly artistic life. In addition to painting, Klee loved music. This shows in his work’s rhythms. If you stand and look at a Paul Klee painting, you may feel music behind it. That seems especially true with The Golden Fish.

There’s dark depth to the water where this gold fish floats. It seems suspended amidst the darkest wonders of the sea. Hanging in the center – it’s like an ornament or pendant. That radiant body highlights the inherent mystery of an underwater world.

Much like The Golden Fish, Klee was mysterious. His introverted personality shows in his symbolism. Klee paintings don’t tell stories. Instead of a narrative, they present his frank and unique style. In fact, he’s hard to characterize. But whatever group Klee belongs to, he stands out as an individual with his own style.

The majesty of this fish emanates as a golden glow. It seems somehow more than a mere fish. Red fish exit the scene at each corner of the painting. Paul Klee has each of them facing away from The Golden Fish. They seem to flee. Moths flock to light. These crimson fish do the opposite. The glow sends them swimming. Runic symbols decorate their fleeing red fins. The waters darken at the edges as well. So, the mystery deepens at the painting’s outer corners.

Viewers may wonder why these red fish bolt away from the glorious golden fish at center. It may be fear of the gold fish. After all, it’s bigger, different and more beautiful. Like an underwater tattoo enthusiast, runic symbols color the whole body. While the small, red fish show mere sprinklings of these signs. They seem like baby fish scampering and scared away from its grand gold form.

The Golden Fish & The Goldfish

Paul Klee entitled this painting The Golden Fish. But it’s often called The Goldfish by viewers and even art historians. I’m not a fan of this practice. Words matter. There’s a big difference between the two entities. Klee’s fish here is nothing like an actual goldfish. The Golden fish has a sleek, slender figure.

He slides through the navy waters with cool elegance. Most goldfish are rounder. All are flirtier. Frisky fins are prominent goldfish features. Klee’s golden fish has afterthought, barely-there fins. His portrait focuses on its long body. Also, this fish exemplifies deep, serious thoughts. There’s a stillness in the way The Golden Fish floats in the center. No flirting allowed in its midst. That may be why the rounder red fish flee the painting’s serene territory. Their kittenish ways don’t belong.

The Golden Fish glows while its lesser counterparts wear smudgy and matte fins. They also lack distinctive features and are even eyeless. But our golden hero’s eye creates a swirling pink focal point. Its body works like a lamp, brightening the dark seawater. This eye indicates its visionary stature. The fish lights our way as a beacon. The Golden Fish symbolizes leadership. It stands prominent and central among many minions.

What kind of painting is Paul Klee’s The Golden Fish?

This masterpiece fits into a few categories. It’s a solid Expressionist example as well as Modernist. Expressionism refers to a style of painting. It’s about conveying feelings through artwork. Modernism is about when the work was made rather than how. Some in the art world also say it’s a significant animal painting. That’s because Klee gave The Golden Fish majestic qualities beyond those of an ordinary fish. He portrays it as more than a mere animal.

What is the painter Paul Klee famous for?

Klee first made art world headlines when he shifted into abstract painting in 1914. Art critics buzzed about his distinctive style shifts. Then in 1917 Klee earned even wider exposure and commercial success. That was thanks to his three year art-dealer contract with Hans Goltz. His painting style changed but Klee never left the spotlight. He remained an eminent painter and taught at the top German art schools. Sadly, the Nazis fired him in 1933. So, he fled to Switzerland. That trauma inspired Klee’s work. He thus created 500 paintings in one wretched year.

What techniques did Paul Klee use?

Klee used many techniques. He loved to experiment and even play with painting. For example, he mixed mediums in unexpected ways. In The Golden Fish, Klee combined watercolor and oil paint. That’s a complicated endeavor for any artist. After all, oil and water don’t blend. Klee also painted this on paper. That’s an unusual base for oil painting. But it’s one of the reasons this painting has an eerie underwater quality.

Where can I see Paul Klee’s painting The Golden Fish in person?

Hamburger Kunsthalle houses The Golden Fish. One of the largest museums in Germany, Kunsthalle maintains an app as well as a fantastic website. Their collection’s packed with masterpieces. This museum stands out because they make every visit fun. Hamburger Kunsthalle engages visitors with cool activities. No matter how you visit – in person, on the app, or via the site, it’s entertaining.

ENJOYED THIS The Golden Fish ANALYSIS?