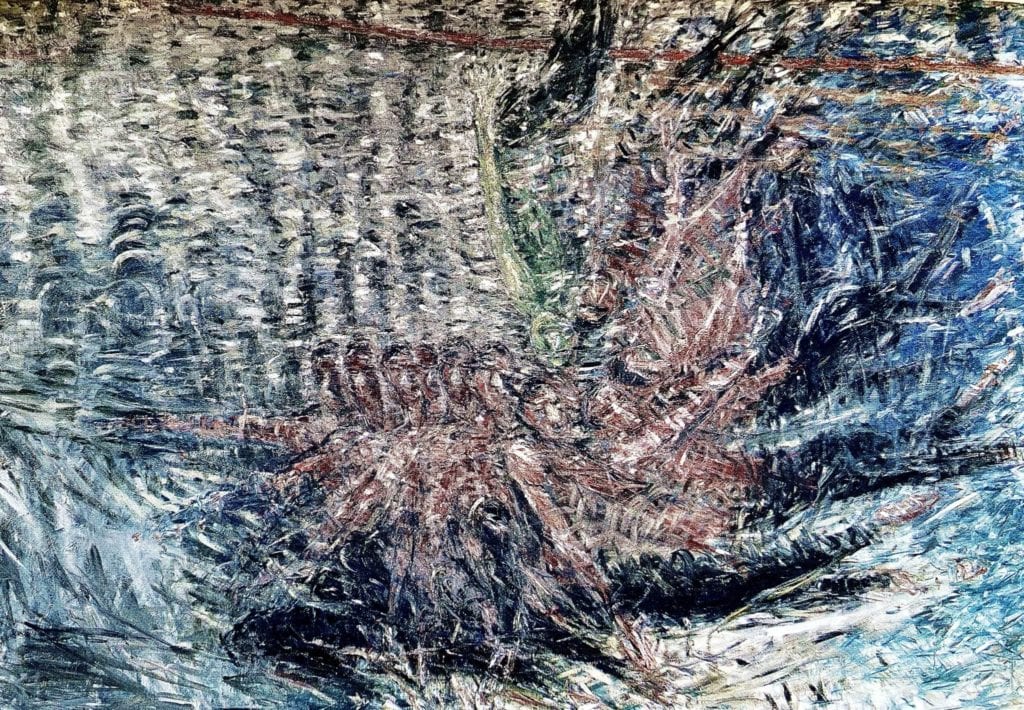 This evaluation of Susan Rothenberg’s Vaulting covers these points:

Brushwork flips reality to the abstract in Vaulting. Modern artist Susan Rothenberg’s known for her expressive technique. Her paintings exemplify movement. This is the key element to Vaulting. A vaulter becomes motion rather than mere man. This American painter reveals the inner experience of movement. It’s also how she created this masterpiece.

As a dancer, Susan Rothenberg knew what it felt like to move. There’s intensity inside a moving body. This is what comes through in her painting Vaulting. It’s not just a body moving. This portrays a body as movement. When she painted this, Rothenberg was living by the sea. Its constant shifting inspired her to capture the concept of movement itself. So, her painting took on a fresh quality. She used paint to show the liquidity of motion.


Scanning the canvas, viewers locate black pants swirling through the space. We spot the bar at the top. Black pants and a man’s bare chest come into focus. Then viewers see limbs tumbling like wheel spokes as they turn. From these signals, the flying vaulter becomes clear. This vision blurs into Vaulting. That glorious feeling of movement reveals the beauty of this piece. It moves us. American artist Susan Rothenberg holds us spellbound within the action.

Vaulting tells a story. It leaps into action. The story will then end with an inevitable touch down. Susan Rothenberg kicks off the narrative in medias res. That’s latin for “in the midst of things”. It’s a common storytelling method for action movies. We don’t often see this in painting. But Vaulting shows a keen example of how it works. The vaulter’s airlifted here. He jettisons across the canvas. From over the bar toward landing. But that’s an event that will never be. The vaulter’s caught mid-air for eternity.

The Haunting Force of Motion

Vaulting shows a split second vault broken down to recognizable bits. That’s why this painting feels like a portrait of progression. Part of that comes from the viewing experience. First we discover that it’s a vaulter. Then details get clearer. Viewers recognize that Vaulting portrays this particular vaulter in motion. We know we won’t get the satisfaction of his landing. Nor the inherent anticipatory thrill that comes with takeoff. Yet there’s still emotion here. It’s a whirlwind captured as if with a stop motion camera.

The vaulter seems like a spectre. His body descends across the canvas with a haunting velocity. Each flourish of his fall makes an imprint on viewers. The painting forces us to parse each of his moves. We look closer and might step toward the canvas to see better. But then a step back reveals even more. It’s not a portrait of a man. This portrays motion itself. Standing away a bit reveals the beauty of that movement. The individual vaulter falls out of focus. He’s a ghost. All that matters is action.

I’ve always seen Vaulting as a haunted painting. How many people walk right by it and never see the vaulter? They might think it’s a spider. Or a quick, dismissive glance might conclude that it’s just an abstract. Of course, it’s a bit abstract. But there’s a lot more to this painting. It’s got a bottom line unlike any other. Not only does Susan Rothenberg make us look deeper into her motion portrait. She also created an image that transforms while we gaze into it. It may move us in every sense of the word. Physically, viewers step into it and then back away. This painting also moves viewers in the purest way – emotionally. That’s why it’s a contemporary masterpiece.

Where can I see Vaulting by Susan Rothenberg in person?

The Cleveland Museum of Art holds many masterpieces including this one. Vaulting sits in their Contemporary Art collection. In fact, it’s in the America – 20th Century section. This exceptional museum houses many art masters including Georgia O’Keeffe, Henri Rousseau, and Alice Neel – some of my favorites. They also engage a top notch online gallery. So, even if you can’t make it to Cleveland, this fantastic collection’s accessible 24/7.

The art world thrilled with anticipation when the exhibition including Vaulting launched in 1987. That’s because Susan Rothenberg was already an established painter. At that point she’d portrayed disembodied heads and horses galore. It’s what Rothenberg was known for. So, this was a vivid departure for her. She retained some of her signature elements, a ghostly quality and the liquidity of her spaces. But movement was her new jam. Rothenberg’s new work generated buzz and kept her relevant.

How much is a Susan Rothenberg painting worth?

I found work by Susan Rothenberg available at a wide range of prices. There are currently gorgeous Rothenberg lithographs online priced from three to eighteen thousand dollars. A lithograph’s not exactly a painting, though.

That’s because the artist paints directly on a stone or metal plate. Then they transfer this original image to paper with pressure. So, it’s not painting. But it’s also not a copy. Each lithograph is considered an original creation. The artist paints each one individually.

Sadly, Susan Rothenberg died at seventy five years old in May of 2020. This means her work may increase in value. It’s a great time to buy.

How popular is Susan Rothenberg’s work?

Rothenberg’s work entered the popular culture in the 2000s thanks to the Obama administration. They put one of her iconic horse paintings, Butterfly, up in the White House. This enormous painting was photographed often there and thus appreciated by many worldwide. Her work will continue to span the globe. That’s because she has works at many of the top museums. This includes Museum of Fine Arts – Boston, Tate Gallery in London, and LACMA.