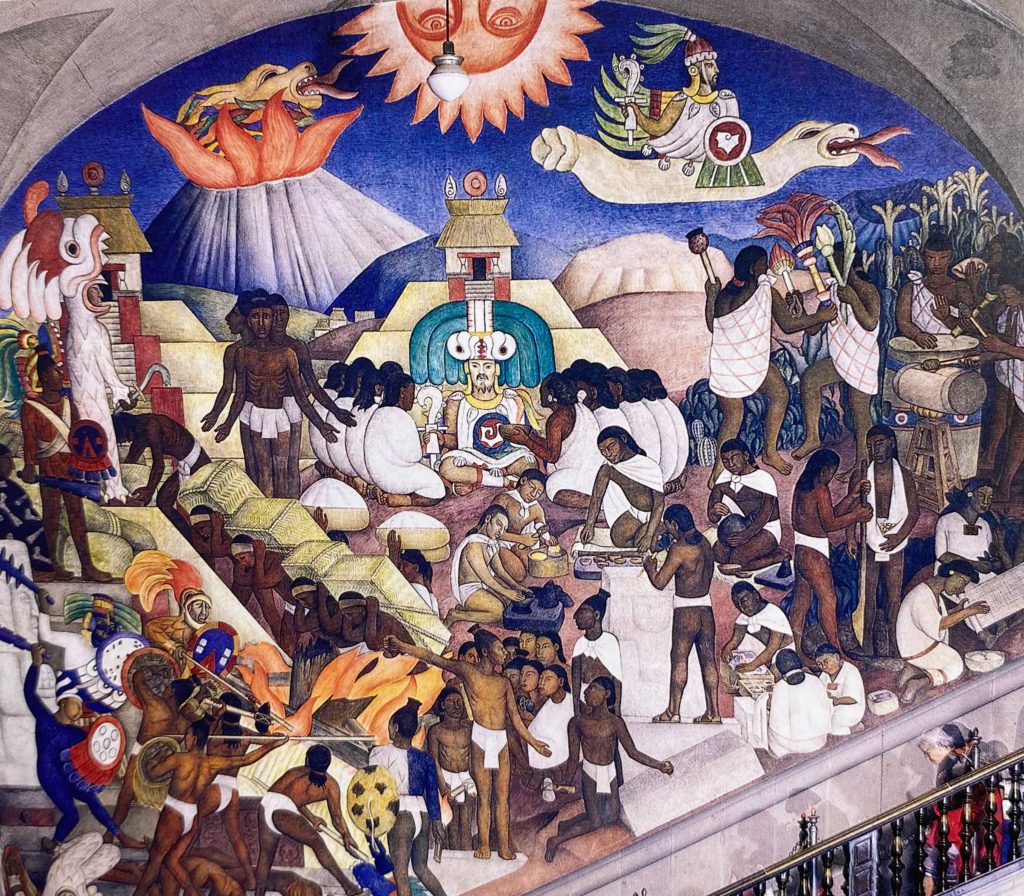 Why does the mural Ancient Mexico: Conquest to 1930 by Diego Rivera matter?

The Mexican revolution spawned more than freedom. It inspired Ancient Mexico: From Conquest to 1930. This was the first in Diego Rivera’s History of Mexico mural series. The Mexican government commissioned it to celebrate the overthrow of dictator Porfirio Diaz. It meant an artistic renaissance in the palace as well as a new government. Rivera’s political persona fit the project. He was hardcore. This was true in all aspects of his life. But politics most of all.


Ancient Mexico graces the north palace wall. It depicts early Mexico, before colonization. In fact, Rivera includes ominous imagery to foreshadow what’s coming. That includes monsters in the sky and on land. Each presents as a costumed colonizer with pale skin. They’re almost beautiful in their flamboyance of color. Notice these monster colonizers are also placed above the native Mexicans. Each colonizer wields a curved white sword. They hold these weapons as if innocuous, the way one might grip a spatula. But the blades are massive – longer than their torsos.


Rivera’s placement illustrates the roles colonizers played in overtaking Mexico. For instance, the palest intruder sits in the way of the sun altar. The sun, an Aztec deity, represented the ultimate power to them. So, in Ancient Mexico these people gathered to worship the sun but then faced a colonizer barrier. Diego Rivera uses this character to show how pale intruders force-fed their religion. Notice that the native Mexicans respond with kindness. They offer the missionary a bowl. Meanwhile, he holds his weapon upright to keep them farther away. This shows the missionary role and how the Mexicans treated them.

Rivera puts the religious scene in Ancient Mexico‘s middle. This points to belief as a core colonization issue. Those who intrude upon natives do more than physical harm. Missionaries impose spiritual ideals as if teaching facts. It’s more gentle than slaughter. But Rivera includes the saber. After all, belief systems and souls are at stake. To force change them represents a violation. Colonizers respected no boundaries.

Violence is the ultimate in boundary breaking. Rivera lights up Ancient Mexico‘s left side with this pillage. He uses strategic orange to link an armed intruder with a raging fire. It’s distinct from the sun and volcano colors. Those are inherent to Aztec culture. While the destructive fire and invader match to orange perfection. The man and flames attack as one. Just as fire destroys without regard or thought, colonizers violate indigenous cultures.


In fact, the flourish of feathers on the invader’s helmet also mirror the flame shapes. It’s as if he attacks with inflamed fury. This attacker also has the palest face. Other colonizers attack wearing different colors. They have varying complexions too. Rivera thus shows how it wasn’t only one group invading Ancient Mexico.


One of them wears the same blue as the painter’s sky. The red in his clothes also matches the stripes of the Aztec architecture above. That’s how Rivera pointed out that even among indigenous Mexicans, there were betrayers. Some were paid Mexican mercenaries. This is a common practice among colonizers. It’s part of classic missionary strategy. They change minds first and conquer material matters next.


There’s also an animalistic aspect to invaders. Like dogs marking their territory, they conquer without any true claim. But Diego Rivera draws even darker parallels in Ancient Mexico. The Volcano dragon’s my favorite part of this mural. I love how its tongues touch the sun. This dragon also seems to rise from the volcanic fires, adding color and life to nature’s roar.

Speaking of animals, there’s also the elephant in the room. Rivera painted these murals with a primitive style. He gave everything equal weight in tone and line quality. All the colors convey the same richness. This matters a lot here because there’s so much going on. It has an overwhelming effect. The painter did this with purpose. That complexity forces viewers to take a closer look.


Diego Rivera was an ardent Marxist and called himself a painter for the people. That political purpose also comes through his technical style choices. Each element carries the same value in the piece. That’s because he uses a flat tonality. The lack of variation, line weight, and lighting create a single plane of equality to his subjects. It’s Rivera’s ideal world in technique – balanced. But Ancient Mexico also portrays the nightmare of destructive conquest. Diego Rivera’s unity of opposites in style and subject make this a complex, memorable masterpiece.

Ancient Mexico: From Conquest to 1930 – FAQs

Why is Diego Rivera an important painter?

Rivera isn’t only important in art history. In Mexico he’s the most important 20th century painter. That’s because he reinvigorated frescoes and murals with masterworks in both. This was a political move for Diego. He did most things, including art, through a Marxist lens. So, he chose painting genres based on how wide an audience he could get.

Murals and frescoes reach more people than canvas paintings. This started with his first mural in 1922 – Creation. Rivera painted it at the University of Mexico Bolívar Amphitheater. Creation‘s now considered the first important mural of the 20th century. That’s because it represents more than the subject matter. It’s a revolutionary symbol for the movement of the time.

Why did Diego Rivera paint Ancient Mexico: Conquest to 1930?

Diego Rivera moved the art world into a more democratic direction by painting on public buildings. Then Rivera also led the people of Mexico toward a new political frame with his Marxist ideals. He was one of the cultural leaders to inspire the Mexican revolution.

That’s why the post revolution Mexican government commissioned the History of Mexico mural series from Rivera. It lives in the Palace of Fine Arts in Mexico City. Ancient Mexico: Conquest to 1930 was the first in this series.

The Mexican painter starts this visual, historical account with monstrous intruders attacking the Aztecs. These indigenous people represent the Mexican heart, mind, and soul. They continue working even as their people fell. That’s why Rivera gives the painting title a 1930 conclusion. He highlights the resilience of his people under tyranny in this portrayal.

What is Diego Rivera notorious for? 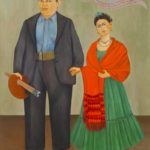 Rivera was notorious for two reasons. First, he was bold about his Marxism during the Red Scare and especially the anti-Communist years that followed. For instance, he lost a mural painting job at Rockefeller Center, NYC in the early 1930s. That was because he included a portrait of communist leader Vladimir Lenin. At the time, it was a shocking inclusion that many labeled “unAmerican”.

The Mexican painter also gained notoriety from his rocky marriage to fellow artist Frida Kahlo. They were visual opposites (see her painting above). He was 20 years older and 200 pounds heavier than Frida. Though they both cheated, his lothario ways earned him a terrible reputation. Partially due to Kahlo’s iconic feminist status, she won the image war. As a team, they were known to fight like demons. Yet the pair reconciled only a year after divorcing and remained married until Frida’s death.

Check out these other essays on History Paintings

Creation (1931). From the Collections of the Library of Congress

Marnham, Patrick (1998). “Dreaming With His Eyes Open, A Life of Diego Rivera”. The New York Times, Alfred A. Knopf.