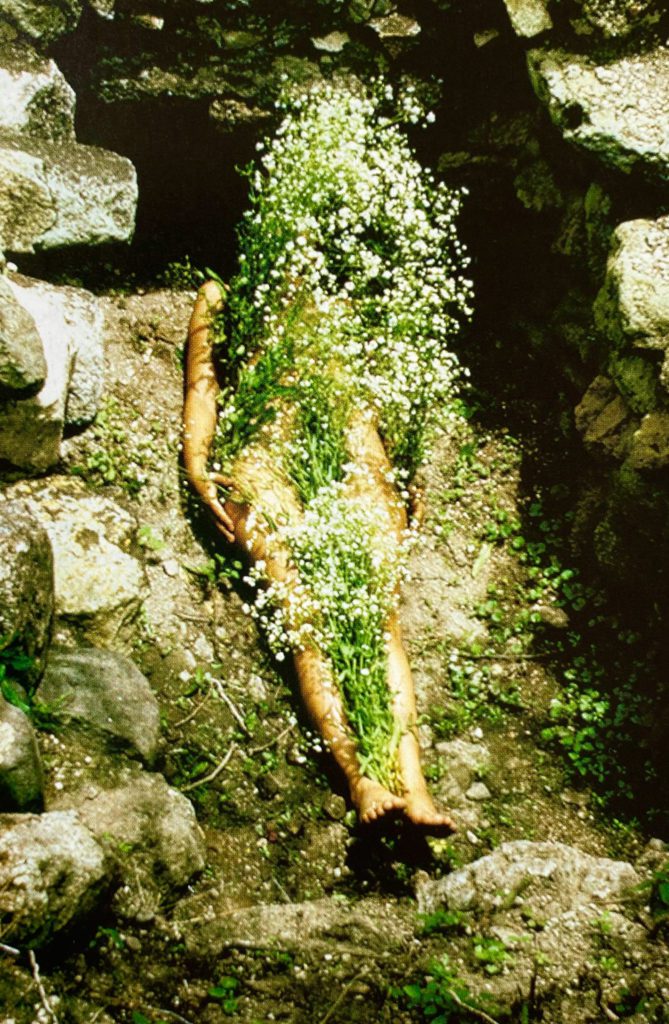 How does Ana Mendieta’s Flowers on Body both subvert and epitomize feminist art?

The mention of “Mother Earth” brings Ana Mendieta’s photograph Flowers on Body to my mind. It’s the core piece in her series Silueta. The collection name refers to silhouettes. Viewers see Mendieta’s figure. Her image remains a mystery, though. Instead wildflowers and grass fill her frame. That’s how she both highlighted and hid her body. This was a subversive move. It sets her apart – even from fellow feminist artists.

In fact, opposition’s the best thing about Flowers on Body. The nude female figure epitomizes the male gaze throughout art history. So, she disrupts this ideal. Her nude body may be present. But it’s also absent. The artist used her 200 works in Silueta to showcase this ambiguity. Each piece is a bit different. Though they unite in theme and subject. In her juxtapositions Mendieta makes us think about bodies returning to earth.

That’s because the artist approached her work with an outsider perspective. She’d come to the United States from Cuba at twelve. This shift contributed to her contentious identity. Mendieta often said she wanted to return to her land. It’s why her artwork includes many imprints of her body in the earth. Of course, the artist also stays embedded there at times in her art too. That’s what I love about Flowers on Body. Mendieta connects to the earth with her skin in the dirt. It’s a tangible reminder that we’re all part of the earth as long as we live on it… and thereafter as well.

Ana Mendieta plugged herself into an earthen cavity for this piece. She’s an insider here, rather than outside. Given the basic human need, it was important for her to belong somewhere. So, feeling robbed of her true home in Cuba, Mendieta dug herself a deep well of belonging through art. The grave-like cradle of ground in Flowers on Body contained rocks as well as her nude form. It couldn’t have been comfortable. The artist also obscures herself with wild grass and flowers. So, her newfound identity remains hidden from us.

Identity and Belonging with Ana Mendieta

Flowers on Body aligns with 1970s feminism in a couple ways. It features her nude figure and she explores personal identity through the photo. But this masterpiece also fights feminist norms. Mendieta unites with the earth. She sinks into the ground rather than seeking visibility. Much of feminist art at the time was about getting seen. If it didn’t in the literal sense, feminists often focused on perception. For instance, the male gaze was a hot topic in those days. Ana Mendieta, though, doesn’t vie for attention or even care about viewer perception.

This work narrows the scope. She focuses on her human identity – beyond gender. Her portrait in Flowers on Body could be male or female. It’s only because we know the artist that it feels feminine. This works against the essential feminist notion of inherent difference between genders. Mendieta presents us with a human form. It’s genderless. She reminds us that all humans want to belong.

Flowers on Body also evokes a sense of fitting into the world. The figure lies in natural repose, as if awaiting burial. But she seems about to rise. It’s clear she’s conscious and calm. The cavity suits her body size and shape. This shows harmony. The walls of stones around her serve as a location reminder. She shot this in Mexico. So, Mendieta unearthed these ancient, buried stones for the portrait. They’re a symbol of her hispanic culture. The artist thus shows how gender disappears in matters of nature and culture. Both seem to engulf this peaceful being and imbue depth into the image.

Mendieta dug deep for this portrait. It’s packed with significance. But Flowers on Body stays with me thanks to its pure beauty. When I was young, art always seemed to be about sex or death. This piece held significance in my life because it woke me from that simplistic, binary, mindset. When I first saw this masterpiece, I witnessed a rousing debate. A couple thought it was a commentary on death while their friend disagreed. He insisted it was about sex. Seeing this feisty argument escalate opened my eyes. I looked at the photograph with a fresh point of view. Neither side of the fight compelled me.

Flowers on Body was about so much more than sex or death. Sure, there are bits of each. But it speaks to core human needs. The piece points to cultural connection and sense of self. While it’s also about how we relate to nature and all of humanity. That’s what makes this historic work by Ana Mendieta a masterpiece. She broke new ground and then lay down in it to make a universal point.

Why is Flowers on Body important in art history?

Ana Mendieta’s Flowers on Body beats like a heart at the center of 1970s feminist art. It’s a core photograph in her earth-body series Silueta. These feminist artworks show Cuban-American artist Medienta in 200 depictions of herself undressed in nature.

While this harkens to essential feminism in some ways, the work also subverts traditional feminist ideology. For instance, Mendieta’s work illuminates unity among genders rather than a binary. She also crosses these boundaries in her non-gendered and disappearing self-depiction.

What is Ana Mendieta known for?

Ana Mendieta made a profound impact on the art world. She’s known for shocking, raw pieces in many genres. Whether video, sculpture, performance, or photography, her work remains unforgettable. Exhibitions at the world’s finest museums and a lifetime achievement award keep her name on the list of groundbreaking feminist artists.

Sadly, Mendieta also makes the list for those who died young under suspicious circumstances. The artist was only 36 years old when she fell from an apartment window to her death. We will never know what really happened that night. That it marked a tragic loss for the art community remains the only certainty.

Where can I see more works by Ana Mendieta?

Pieces like Flowers on Body live in the Galerie Lelong & Co. in New York City. Check out their online version of Mendieta’s Estate. But that’s only the beginning of works by and about Ana Mendieta. She made more than a dozen films and several have been created in her honor. There are also exhibitions of Mendieta’s artwork at a number of the globe’s most prominent galleries and museums.

ENJOYED THIS Flowers on Body ANALYSIS?

Creissels, Anne. “From Leda To Daphne: Sacrifice and Virginity in the Work of Ana Mendieta.”The Sacred and the Feminine : Imagination and Sexual Difference, edited by Griselda Pollock and Sauron Victoria Turvey, I.B. Tauris ; In the United States and Canada Distributed by Palgrave Macmillan, 2007.

Gonzalez, Desiree. “Essentialism and Performativity in the Work of Ana Mendieta.” Emory University, 2010.