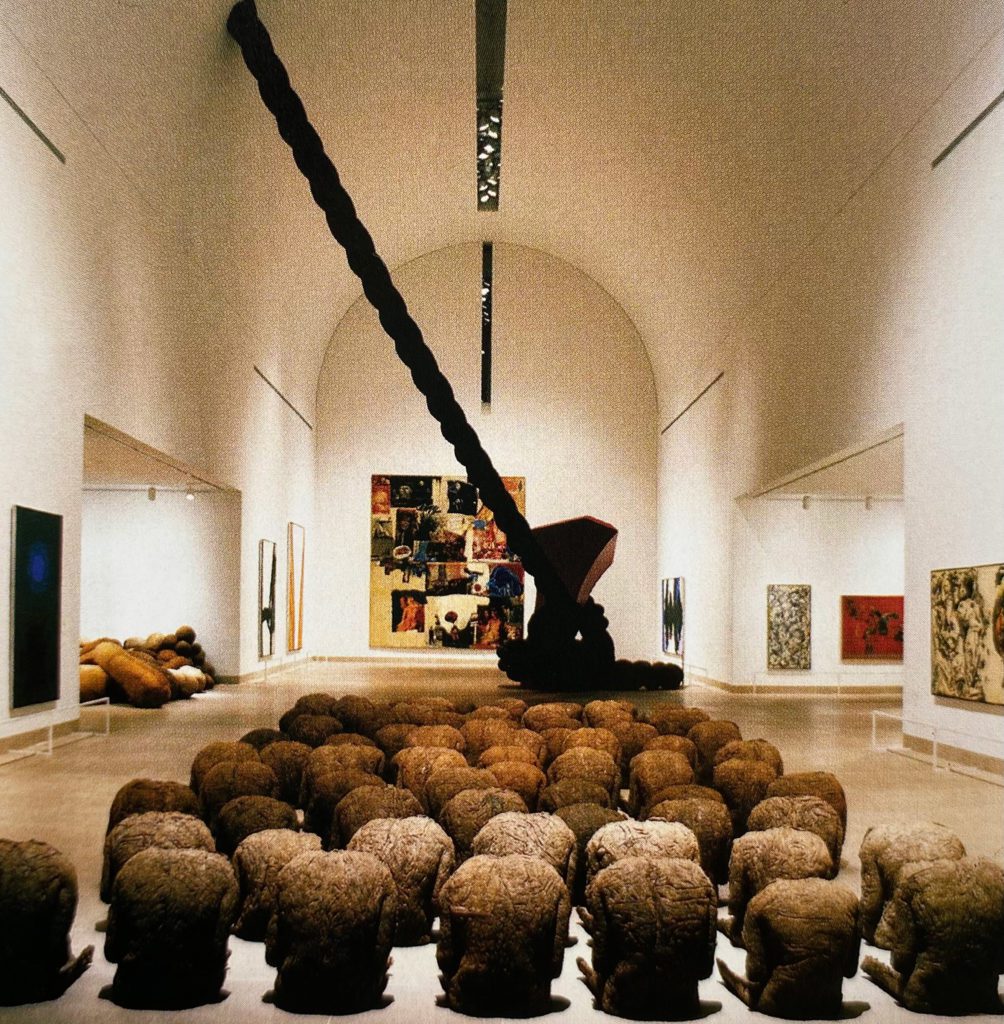 What’s the significance of the Magdalena Abakanowicz sculpture 80 Backs?

The sculptural experience of 80 Backs conveys the emotional truth our spines tell. Human backs often show feelings with more honesty than our faces. That’s because our posture follows the unconscious. While we’ve learned to control facial expressions – backs do as they will. Polish fiber artist Abakanowicz reveals this in her work with profound clarity. The organic fibrous sacks of these 80 Backs read as forlorn. They beckon to viewers with a vulnerable sorrow.


Any gallery these 80 Backs inhabit becomes a sacred space. They bring a stoic strength, as if real humans bow before viewers. Abakanowicz wove tough burlap fibers and imprinted each form as a unique individual. So, like people, no two are exact copies. But they all kneel in the same way – headless and bent low. In fact, she draped her burlap fibers over forms made from a single mold. Without heads, these aren’t quite full human figures. Yet they’re relatable on a gut level.


Abakanowicz shows us that we are each different in some way. She also unites these 80 Backs into a singular work of art. Together they represent the resilience of the human spirit. Separate they are mere sad moments. As humans we sometimes lose our individuality in a crowd. That can be the price we pay to achieve greater strength at times. Viewers sense a power emanating from this Abakanowicz sculptural setting. It feels more like a temple than gallery exhibit thanks to the sacred stillness of these backs.

I feel overawed by quantity where counting no longer makes sense. By unrepeatability within such a quantity. By creatures of nature gathered in herds, droves, species, in which each individual, while subservient to the mass, retains some distinguishing features. A crowd of people, birds, insects, or leaves is a mysterious assemblage of variants of certain prototype. A riddle of nature’s abhorrence of exact repetition or inability to produce it. Just as the human hand cannot repeat its own gesture, I invoke this disturbing law, switching my own immobile herds into that rhythm.

The Abakanowicz quote above represents her artwork’s vibe to perfection. In fact, with 80 Backs she created a physical meditation on these very ideas. Even though her title tells us how many there are, the number of backs doesn’t matter. Instead the human forms beckon viewers. These partial people seem peaceful. They may be bowing or praying. Either way, each back represents a surrender. These bodies give in to something more powerful. They turn their will and body over to a greater being.

Of course, it may only be a higher power for the moment. Standing in the gallery space with 80 Backs, I wondered about that. What is the power they’re bending toward? It could be us, the viewers. After all, we’re the ones looking down on them. Abakanowicz built small irregularities into the backs. So, they seem like real humans, bent before us. At first, that made the scene unnerving to me. Then I found solace in the sense that whatever it was they bowed to – it was greater than me.


That’s what gives 80 Backs its profound serenity. Abakanowicz summons a mighty presence without representing it. The absence of whatever they bow to seems to empower it all the more. Each physical back has an organic quality. They seem earthy and alive. While the room feels like a sanctum for something mystical they beseech. This combination gives the masterpiece both a natural and otherworld quality. The artist pairs humanity and spirituality. Museum and gallery visitors tend to speak in hushed tones. But the space holding 80 Backs was like a tomb of quiet. Even a whisper felt too loud for this divine art sanctuary.

What kind of artist was Magdalena Abakanowicz?

Abakanowicz was a pioneer of fiber sculpture art. She’s one of Poland’s most world renowned artists. In her lifetime Abakanowicz collected a long list of honorary doctorates and awards.

How does 80 Backs fit into Magdalena Abakanowicz’s legacy?

Signature Abakanowicz works include vast groups of human and animal forms. In these creations Magdalena first shaped plaster to represent figures. She produced large quantities of each cast (50-150) in duplicate.

Then the artist created different markings on the fabric and resin draped over them. These sculptural groups, such as 80 Backs, made profound and popular gallery exhibits.

Sadly, Magdalena Abakanowicz died in 2017 at 86 yearls old in her home country, Poland.