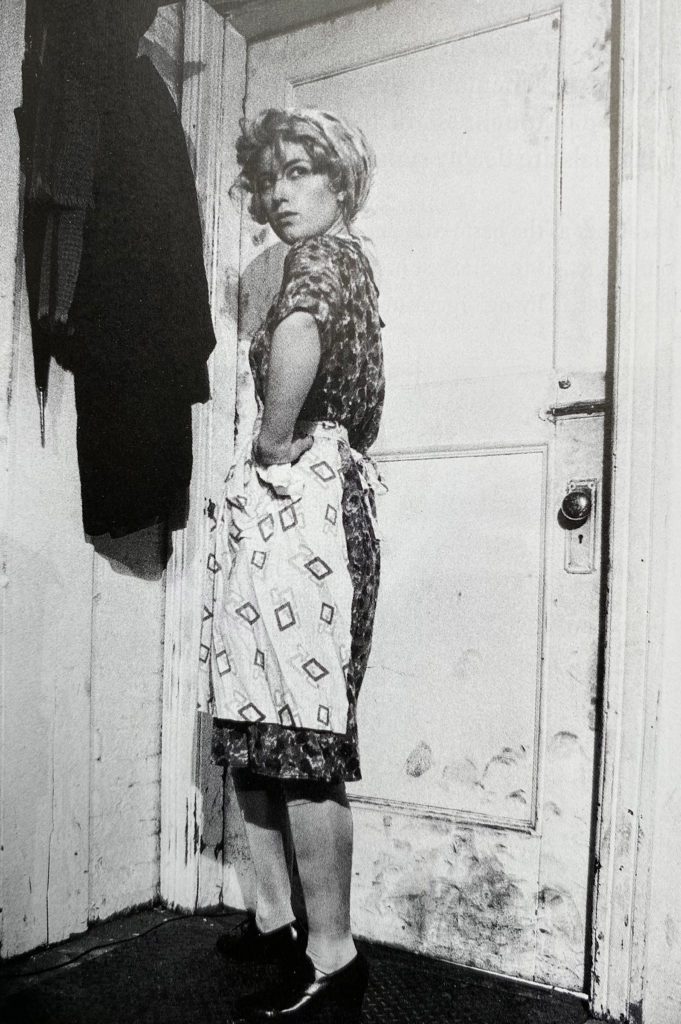 
So, Cindy Sherman plays dress up. She dresses in wigs and costumes to act out female stereotypes. Her part in these scenes also playacted traditional women’s roles. They touch on familiar film characterizations. But Sherman used generic imagery rather than referring to a specific movie. Her housekeeper costume in Untitled Film Still 35 could be for any such character. One certainty, it’s 100% feminine …and she looks peeved.

After the 70 black and white shots in this first Sherman Untitled Film Series, she shifted into color. But the theme hits harder in these early prints. They speak to the limits of binary thinking in media. She presents women characters in ways that seem typical of movies and TV. The context of fine art photography then shows the absurdity of these portrayals. This often comes through in Cindy Sherman’s facial expression. Untitled Film Still 35 gives us an iconic example. The artist is pissed. It’s all over her face.

Why is Cindy Sherman an important artist?

Cindy Sherman covers all the bases when it comes to significance in the art history canon.

Clout – Sherman’s art earned her a Macarthur Genius award as well as an honorary doctorate from London’s Royal College of Art.

Money – Many measure success by the mighty dollar and Sherman will impress these folks. The only woman on a list of NY’s richest artists, Cindy’s number three at an estimated personal worth of $35 million.

Relevance – A 21 piece collection of film stills from the series with Untitled Film Still 35, recently sold for $6,773,000.00 at a Christie’s auction in NYC. Solid financial vengeance for an artist who failed her first college photography class.

Where can I see Untitled Film Still 35 in person?

Untitled Film Still 35 lives at the Whitney Museum of American Art in NYC right now. But it’s also traveled all over the world in various exhibits. This included a major retrospective at the Museum of Modern Art entitled “Cindy Sherman”. That exhibit went on to show at other esteemed museums and included more than 170 photographs.

Why does Cindy Sherman look so familiar?

There are three reasons this question makes perfect sense:

1) Celebrity – After divorcing her fellow artist husband in 1999, she was romantically linked with several celebrities. These include Steve Martin, David Byrne, and Richard Prince.

3) She puts herself in familiar settings in these works as well. Sherman loves to reference popular images from culture to make a point about how media depicts women.

Click if you don’t believe that Victorians sexualized ankles