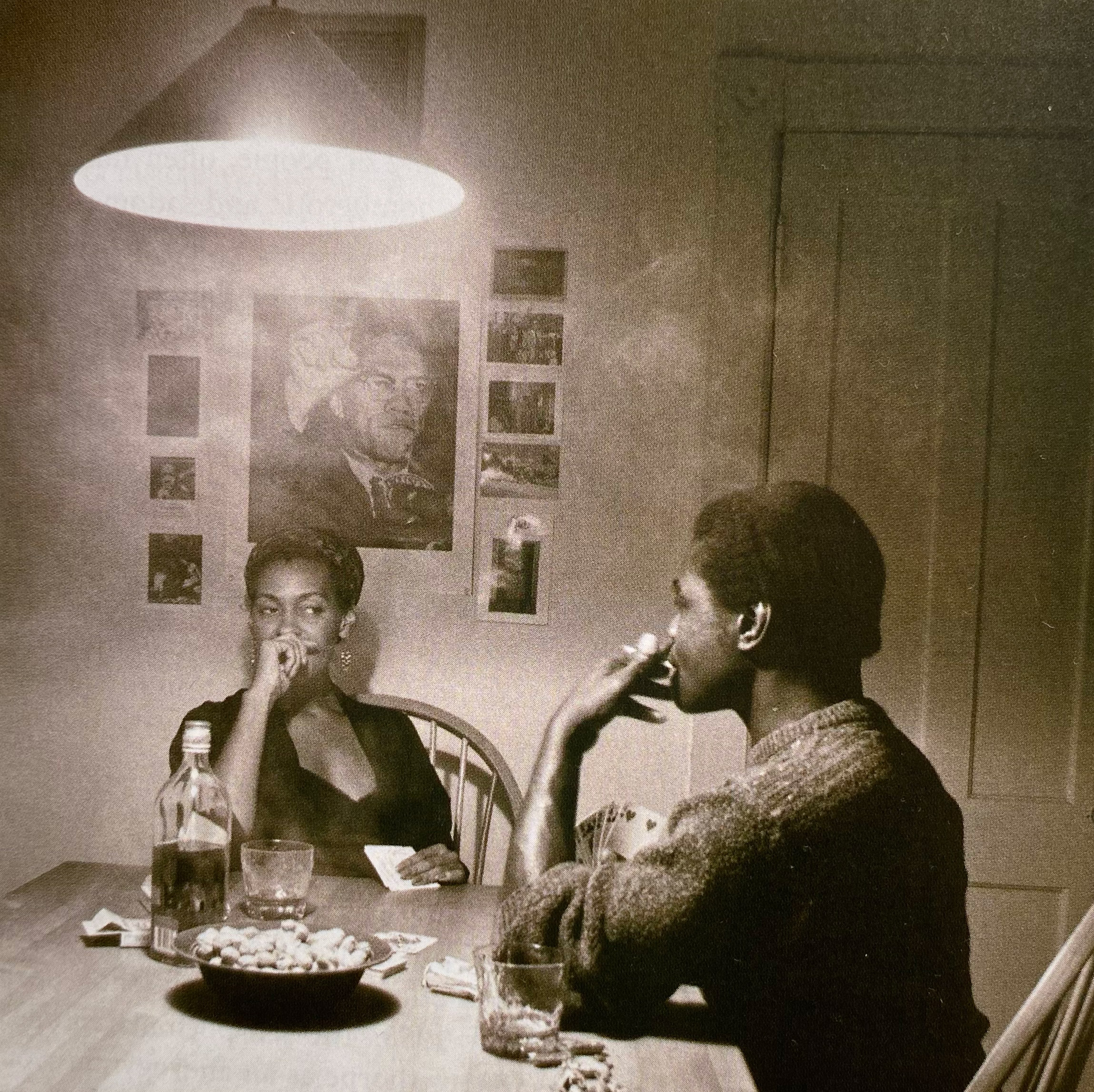 The photograph Untitled (Man Smoking/Malcolm X) sets a theme for the Carrie Mae Weems Kitchen Table series. She made this series, about a decade after Cindy Sherman’s Film Still series, in 1990. Weems stars in her series and named it after the setting. Both of these moves parallel Sherman’s portraits. But the Weems photos dig deeper into the human condition. Kitchen Table series hits closer to home. Carrie Mae’s work explores intimate relationships in these photographs.

This personal theme counters the public elements in the Sherman series. Those 1979 film stills focused on media portrayals of women. Carrie Mae Weems leaves out the costumes and wigs to get real instead. She highlights domestic life in a Black family with herself at its center. Man Smoking/Malcolm X cuts to the emotional core.

This is why Carrie Mae Weems is my favorite contemporary photographer. She doesn’t talk about concepts created by or about “the other”. Those are ubiquitous. They get old quick. Instead, Weems teaches me new lessons. She illuminates strengths and complexities of real character. That’s because Carrie Mae probes domestic realities – not only constructions. We see more than a performance from Weems. She creates natural dynamics to set the photos in familiar relationships. The card-playing pair in Man Smoking/Malcolm X illustrates a keen example.


Though the man gets a title mention, it’s clear that Carrie Mae Weems plays the lead here. Not only because she’s backed by Malcolm X. There’s art history behind her as well. Of note, there was Caravaggio’s CardSharps in 1594 and Cezanne’s Card Players of 1894. But fine art also includes thousands of other card game masterworks. No matter which Weems had in mind with Man Smoking/Malcolm X, it’s an apt reference. She fits right into the card playing, fine art, canon with this photograph.

In fact, Carrie Mae Weems illuminated viewers beyond these classics. Her fresh take in Man Smoking/Malcolm X gives us a universal story as well a specific one. Weems sits right under the interrogation style lamplight. She owns the scene with this position, as well as the look on her face. The left hand at her mouth suggests casual questioning. Cards in her right hand give us one reason why. What cards does he hold? We also know that’s not the real question, though. After all, viewers can see his cards. He’s got hearts. This photograph’s about hearts, not the cards.

Global Matters at the Kitchen Table

The personal reverberates as universal in Untitled (Man Smoking/Malcolm X). Carrie Mae Weems renders this combination with a mastery of detail and resonance. Tension soaks this gelatin print thanks to interrogation lighting and two bent elbows facing each other. Arm wrestling comes to mind. A poker game works a lot like wrestling; as does a romantic relationship. Weems eyes her opponent across the table with skepticism. It’s personal and points to this particular pair in the present moment. But there are also elements of all love relationships here.

Lovers and family members play games. They can bring up trust and identity questions. This comes through in the face of Carrie Mae Weems. She’s wondering about this guy. The artist doesn’t know if she can trust him. He smokes and thus creates a subtle fog between them. This blurs her view of him a bit. So, he doesn’t shield only his cards. The man’s face also hides behind his hand and smokescreen. Weems mirrors this with her own hand. She’s not giving up more than what’s given. They are a matched pair in their parallel gestures. Both also have empty glasses beside their bent elbows.

The booze bottle between them tells us that story. In fact, the setting helps viewers interpret this scenario with ease. For instance, we know this kitchen table belongs to Weems. The pictures beside her Malcolm X preaching portrait tell us this. They’re her personal photos. So, the wall behind the woman favors her. She’s in charge. After all, Weems has Malcolm X on her side here. It’s safe to say he’s a prominent figure – especially in the Black community. She gives us lots of information about her character. But the man remains mysterious.

This points out her thoughtful composition. Even though we see her as the strong leader in this self portrait, the picture’s ultimately about him. We look at him much like she does – wondering, Who is this guy? Sizing up (Man Smoking/Malcolm X) requires this question. Weems constructed the photo like a puzzle with that inquiry as the key. Like a master painter, she draws our eyes to the point of the piece. Weems delivers a direct shot. This indicates one of the signature signs of a masterpiece. It makes us feel smart. She makes us look deep into the scene and serves up a buffet of meaning.

Many art historians say that Weems photographs portray the Black American experience. Yes. But they do much more than that. Her works span the gamut of human experience. They speak to all of us. In fact, it’s the specificity of her stories that makes them so real and able to reach everyone.

Why is Carrie Mae Weems an important artist?

Carrie Weems rocked the art world with her photography in the early 1990s. She focused her lens on Black Americans within intimate settings. These photos then illuminated all matters of human experience. The many works of Carrie Mae Weems explore profound themes like inclusion, sexism, racism, and relationships.

As a photographer, she’s most known for unforgettable portraits. For instance, her Kitchen Table series. This put her on the art world hot list. Punctuated by iconic photos such as Untitled (Man Smoking/Malcolm X) the series secured Carrie Mae Weems in the art history canon.

The New York Times nailed this when they wrote of Weems, “Perhaps our best contemporary photographer, she creates work that insists on the worth of black women — both in art and in life”.

Where can I learn more about Carrie Mae Weems?

There are two wonderful ways to check out thee work and life of Carrie Mae Weems. For her best bio, go to the source. She has a cool website called CarrieMaeWeems.net. I recommend reading it. My favorite part is her life timeline. This includes an entry for 1971 that reads, “Packs a cardboard suitcase and moves to New York… with baby in tow”.

Another fantastic way to learn about this master photographer is the retrospective Yale University Press published in 2012. This book Carrie Mae Weems: Three Decades of Photography and Video spans more than 200 of her works. It also includes many scholarly essays. You may want to check your local library for it, though. The cheapest used one I could find was more than $250.00.

An iconic contemporary artist, Weems does photography and much more. She works in text, fabric, audio, digital imagery, and installation video. Weems also has taught at Harvard, Wellesley and Hampshire College. She’s also a coveted curator and artist-in-residence.

But it seems Weems might be best at collecting accolades and honors. Her awards list includes a MacArthur Fellowship, a Lifetime achievement award, and many more. She continues to make a unique and indelible mark on art history.