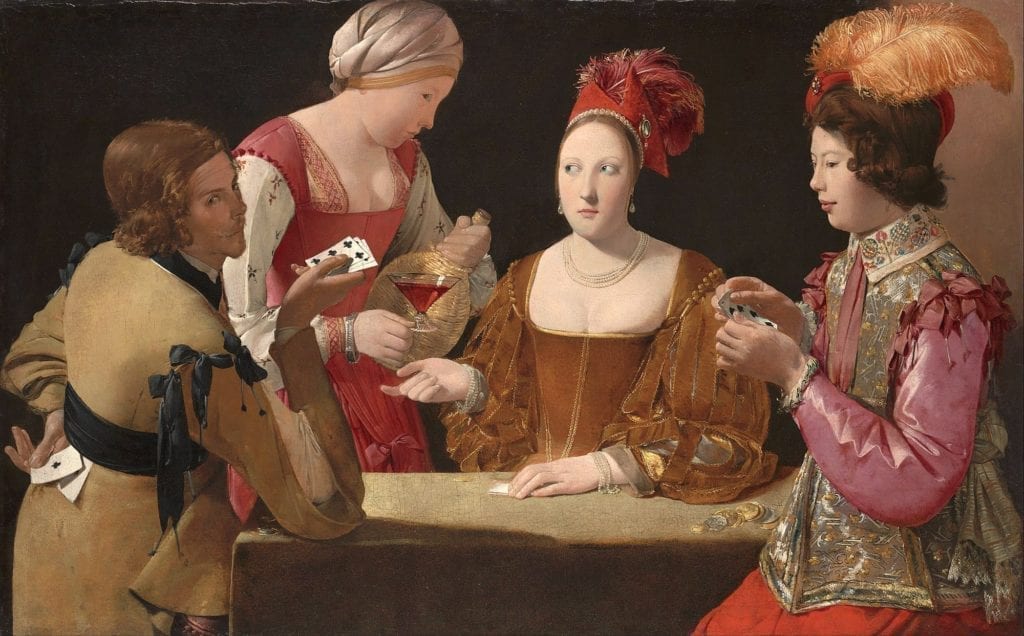 This blog post about La Tour’s The Cheat with the Ace of Clubs includes:

Every character in The Cheat with the Ace of Clubs tells a story with their eyes. It’s a familiar tale, thanks to paintings like The Cardsharps by Caravaggio. La Tour may even have created this as a pastiche. This painter sought a better clientele because he was in Lorraine, France. While the hot art markets were far away in Paris and Rome at that time. It was the late 1620s. The Cardsharps painting was around the same age as La Tour and mighty popular. His version of the story stands apart from Caravaggio’s, though. That’s because La Tour didn’t share the elder painter’s love for bad boys. Where Caravaggio shows empathy and care, La Tour prefers pure observation.

Instead of filtering the scene through his own lens, he invites us to judge. We know this thanks to illuminating details in character attire, expressions, and eyes. Each person in the painting wears distinctive clothes to convey class and role. Their eyes tell us the most, though. When viewers notice where the characters look, we can read the whole scene.


Even the story’s sucker (on our right with closed eyes) informs us. He’s shutting them with a self-satisfied smugness. This matches his fancy-pants duds. Such an overdressed dandy; he seems to have spent a bank vault of money on only this outfit. It doesn’t endear viewers to this character. He seems like a fool already. This card table con’s only another inevitable example of his folly. Caravaggio’s mark in The Cardsharps parallels this La Tour sucker. But similarities between the two paintings’ characters end with them.


There are connections between the two paintings. They tell the same story, after all. If you care most about plot, La Tour’s only adding characters. But there’s much more to this cheat than events in sequence. La Tour’s addition of two women points to his more distant and complex take on the matter. In fact, the title here is a bit of trick in itself. If we take it at face value, the cheater is the painting’s protagonist. But he’s the least mysterious character in the story.

Eyeing Where the Characters Look

The Cheat faces us with a daring directness. This shows his brazen character. The con matters most to him. The Cheat’s Ace of Clubs blares at us from behind his back – ready. Everything about this character reads bravado. He’s shameless about trickery. His clothes set a clear example. The Cheat tries to fool us with black bows tied to his shoddy clothes. As if we won’t notice his jacket’s cheap simplicity. Con men are prone to underestimating others. With every successful trick, cheats gain self-confidence.

It makes sense that the Sucker sits across the table from our cheat. He’s the polar opposite character. This doesn’t make him more likeable, though. After all, nobody (except a cheat) seeks out a picture perfect fool for a friend. We know the Sucker’s a fool because he’s not paying attention to the game. Eyes almost closed, he looks inside himself. But it would serve him to keep his eyes on The Cheat with the Ace of Clubs. Our sucker’s far too into himself for that. That’s why he’s got his eyes nearly shut. The better for delving into his favorite person.


We know he’s self important. It’s all in the duds. Sucker didn’t get the minimalism memo. He’s dandied to the max. A flowery embroidered collar wasn’t enough. It’s also got trim and a shiny gold and silver vest. The fool’s feather flares like a giant peacock. This matches his personality. Le Tour’s take on this character shows his lack of concern for the fool. It’s nothing like Caravaggio’s empathetic point of view in The Cardsharps. That’s because Caravaggio liked bad boys. This bias shows through in his portrayal of the cheat in Cardsharps. He’s a nervous charmer.


My favorite part of this painting sits central. Those ladies playing eyeball hockey intrigue viewers. Corseted tight and tense as a violin string, they’re talking with their eyes. In fact, they communicate with everything but their mouths. The lady on our right with a fancy hat speaks with her finger. Her servant hands her a drink. But instead of grasping it, she signals her girl to look at the Cheat. We know hatted lady runs the house. That’s thanks to her delightful ensemble and that finger. She’s in charge. The lady on the left serves our lady in a humble headwrap. She follows direction and thus looks at the Cheat with the Ace of Clubs. Other than us, she’s the only one with her eyes on him.

La Tour includes keen details to complete this scene. In fact, we find out more about the characters on the cards and even table between them. For instance, both the Cheat and Sucker hold a six in their hands. As of this moment in the game, they’re even players. If the game ended without the cheat’s Ace of Clubs, either could win. In this frozen moment, The Cheat with the Ace of Clubs hasn’t yet made his big move. So, the sixes represent their temporary equality.

By contrast, money on the table represents the end game. La Tour shows personalities in their cash too. This French painter gave The Cheat paper money. That makes it easy for him to hide the amount under his elbow. This represents stealth. Meanwhile, The Sucker’s coins splay out in an obvious pile for everyone to see. He’s foolhardy to the max. La Tour presents us with a complex character story and it’s specifics like these that make it a masterpiece.

The Cheat with the Ace of Clubs – FAQs

What kind of painting is The Cheat with the Ace of Clubs? 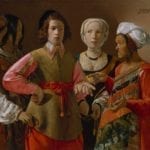 Georges de La Tour carved a memorable position for himself in Art History canon with The Cheat with the Ace of Clubs. He’s known for French Classicism, religious works, and genre scenes of cheats. That’s because this wasn’t his only painting on the topic. In an effort to gain more followers, he branched out into cheats. Sure, this subject seems like the opposite of religion. But they both had major crowd appeal and La Tour cared more about making sales than sense.

His painting The Fortune Teller (at right) matches our cheat painting above in a few ways. There are again four characters. They also play quite similar roles. But the details present a poignant parallel. We know what’s going on inside these characters as well as their actions. La Tour’s mastery of particulars set his work apart in cheater’s paradise. In fact, he used more mastery in his cheat genre paintings than religious ones. That’s likely because he painted the cheats later in his career.

Where can I see Georges de La Tour’s The Cheat with the Ace of Clubs? 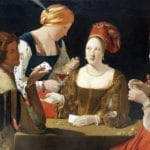 This is an ironic question. That’s because I can’t answer it without mentioning fraud. There are two versions of The Cheat with the Ace of Clubs. The one we see in this blog post lives in the Kimbell Art Museum of Fort Worth Texas. It’s a in-person wonder at three feet three inches by five feet one. The detail can be challenging to see online. But it’s clear and colorful in person.

Speaking of color, the other version of the painting (at right) shows different colors. It’s also got a much stronger level of contrast between light and dark. In the 1970s you could have seen this version at the Louvre. In fact, I did just that. Little did I know that it was a fake. That’s why the colors are brighter in this version. They aren’t George de La Tour’s colors. After this was determined by English art historian Christopher Wright, the Louvre took the painting down. Luckily, the one at Kimbell Art Museum remains the real deal. Do yourself a favor and check it out one day.

Why was Georges de La Tour an important painter?

La Tour made a name for himself with his use of nocturnal light. He often portrayed subjects by candlelight in religious paintings. His work with single source glowing beams of light in a dark setting made a name for him. But this was just the beginning. La Tour carried that ingenuity with light into his later genre paintings as well. Then he added dramatic details to bring characters to life.

Viewers loved the intrigue and dynamics he conveyed between subjects in these works. This put Georges de La Tour on the Art History map. He was an iconoclast of 17th century France. That was thanks to paintings like The Cheat with the Ace of Clubs. Then after centuries in the wings, La Tour rose to renewed notoriety in the 20th century.

Here’s some proof. There are four films that mention or showcase La Tour’s work:

– He was the primary influence for the 1982 film The Draughtsman’s Contract, according to the director.
– His work Job Mocked by His Wife appears in the French movie Le Diner de Cons.
– Merchant Ivory’s movie Le Divorce features a reference to La Tour’s work.
– Ariel in The Little Mermaid has La Tour’s painting Magdalene with the Smoking Flame in her grotto.

Enjoyed this The Cheat with the Ace of Clubs analysis?

Check out these other essays on French painters.

The Cheat with the Ace of Clubs at Kimbell Art Museum

Wright, Christopher. The Art of the Forger, 1984, Gordon Fraser, London.