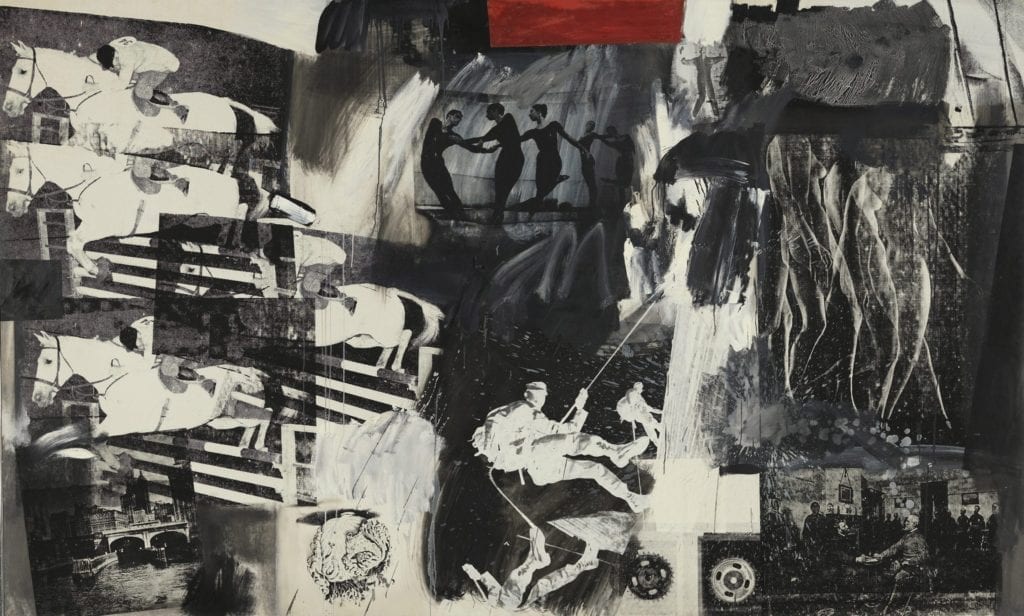 Movement pervades the 110 Express Painting. Rauschenberg injected the canvas with energy. There’s only one band of color – a red stripe at the top. It brings a bit of heat to the otherwise cool, black and white painting. The Avant-Garde painter often used silkscreen and paint on canvas. This creates a collage effect that draws the eyes across shifts in shape and texture.

Robert Rauschenberg made the art world fun again. His paintings invite pure play rather than deep thoughts. Overthinking a Rauschenberg will only waste your time. Even worse, you’d be missing the point. He was an innovator and world combiner. Most of his works collect images in a fanciful unity of disorder. Painted parts draw the artworks together. That’s why Rauschenberg crowns the 110 Express painting with a thick red line. It’s a reminder that this is all one piece. Even though this element fits into the does-not-belong category, it also unifies the artwork.


That’s what I love about the painting. It takes viewers on a wild ride. All the activity reads in black and white with noteworthy repetition. For instance, the jockey riding the horse appears in triplicate. But each is also a tiny bit different. This is what adds the feeling of movement – like a stationary flip book. Dancers and jumpers also show up in copies. So, they seem rhythmic. Instead of only looking at the 110 Express painting, viewers have an activated experience. It moves us. American painter Rauschenberg draws our eyes across canvas like a leading dance partner. He pulls us into the action.

Rauschenberg experimented with this piece and it paid off. He bridged the gap between Abstract Expressionism and Pop Art with wiley mixtures. We can see elements of both in the 110 Express painting. He even blended techniques. For instance, Rauschenberg once erased a painting by de Kooning. With the painter’s OK, he created a new conceptual artwork this way. Andy Warhol also inspired Rauschenberg’s use of silkscreens. But he took them down a different road than Warhol. His experimental methods and vision forged a fresh take with familiar tools.

Red held special meaning to him as well. Rauschenberg was well known for his previous works, the White Paintings, then black, and finally a Red Painting series. These used monochromatic color on canvas. The Red series came last among the three color series. He then used scarlet in new ways – no longer just covering the canvas in all one color. Rauschenberg talked about how red was the most difficult color for painting. It inspired him to include found patterns and objects in the Red Paintings. This set the stage for the 110 Express painting.


This work provokes viewers into a thrill. Rather than stand before it wondering at the meaning, we can simply experience the ride. The painting stops us from overthinking. Most paintings, especially masterpieces, invoke us to ponder. Instead Rauschenberg’s work surprises us with a visual ride. It’s fun to let your eyes travel, even race, through the path he set for us. We can get caught in the whirlwind that replaces our thoughts. As a result, this masterpiece transcends theory and hits us right in the gut, where instincts live.

The coolest thing about Rauschenberg isn’t what he started, though. It’s what he stops. His work wraps viewers into frenzied activity. This brings overthinking museum prattle to a crashing halt. Works in Expressionism invite discussion with emotive resonance. Pop Art raises a mirror to us with familiar cultural imagery. Rauschenberg does both of these – but in a whole new way.

He used society’s imagery. Not the same way Warhol did, though. Yes, his pieces were often also silkscreens. But they didn’t repeat as identicals. Instead, he integrated different versions of images. That’s where the 110 Express painting gets its zest. The canvas whirls with exhilaration. A wide red brushstroke at the top brings an Abstract Expressionist touch to the painting. It’s not only to evoke feelings here. Rauschenberg perches the scarlet banner like a bow to bring the whole piece together.

What was Robert Rauschenberg famous for?

It’s hard to name a single reason for Rauschenberg’s fame. But forced to, I choose experimentation. That’s the thread running through all of his varied accomplishments and artwork. He experimented in every aspect of art. He often combined unexpected elements. That includes working with unique found materials of all types and his combination of genres.

After all, Rauschenberg was both a painter and sculptor. He even explored the art of dance and made quite an impact. Rauschenberg was also an innovator. His art often integrated technology. He also used art and his fame as a powerful instrument for social change. So, his name lives on with more than just works of art. Rauschenberg built a philanthropy legacy with an array of scholarships, residencies, awards, and even a foundation.

What art movement was Robert Rauschenberg?

Rauschenberg pioneered more than one movement in the art world. He helped bridge the space between Abstract Expressionism and Pop Art. Forced to categorize his work, Neo Dadaism may best suit his style. This movement exemplified Dada using modern materials. That means absurd combos and popular imagery.

But Rauschenberg also played a crucial role in making the art world better for artists. He lobbied for artist resale royalties in the US Congress. His hard work paid off in California. So, if a buyer resells an artwork there, the artist will get royalties on that sale. Hopefully, one day a nationwide bill will support artists with resale royalties.

How did Robert Rauschenberg create his work?

Rauschenberg used a variety of techniques. He even invented a few. For the 110 Express painting, he combined collage, silkscreen, and oil paint. Rauschenberg began with enlarging magazine images. He’d then replicate aspects of each and assemble them in patterns on silkscreen. In the end, Rauschenberg pulled the piece together with oil paint.

How much is the 110 Express painting worth?

Sometimes called simply Express, the 110 Express painting increases in value over time. Though it’s not for sale, we know this thanks to the market index for Rauschenberg. It keeps getting better. For example Michael Crichton sold his Rauschenberg painting in 2010 for $11 million. Then in 2019 Buffalo II, a silkscreen by Rauschenberg sold for $88.8 million.