Learn the following about the White Flag painting by Jasper Johns:

Pop Art can be confusing. But not the Jasper Johns masterpiece White Flag. It’s a rare case of what you see is what you get. Checking out this painting in person feels significant because of its enormity. The Metropolitan Museum of Art showcases it well. Thanks to the white wall behind this piece, viewers can’t help but notice it’s not a true white flag. There’s no surrender to this piece. At more than six feet by ten, viewers can’t help but take in its size or materials. Simple and spare as it seems – White Flag gives us a lot.

Though Johns stripped the American flag of color, he added texture. There are layers of newsprint under thick white encaustic brushstrokes. Painters make encaustic by mixing pigment with hot wax. This gives the piece a cloudy glaze. It creates a more transparent quality than white paint. Still, taken by itself, one might interpret this piece as a reference to whiteness. Or it may seem related to a classic white flag – meaning defeat. But this is only one of many in Jasper’s series of Flag paintings. He loved to mix media and explore popular symbols. The United States flag was one of his favorites.

In this instance, with White Flag, Johns reduced the symbol down to a raw state. He removed the fabric, embroidery, and color. All that’s left is pure imagery – shapes and textures. The work focuses on materials more than meaning. Newsprint shows through the encaustic and gives it an ethereal feeling. This makes it easy to forget this represents an American Flag. It’s as if Jasper Johns wrapped the flag up like a gift. So, we get a surprise rather than a familiar symbol.

What is Representational Art?

White Flag by Jasper Johns sets a keen example for Representational Art. That’s because it shows a strong physical reference to a real source – a representation. So, these types of artworks are called representational. Pop Art, in particular, is well known for this. Often artwork is described as Representational in opposition to Abstract, though. After all, most Abstract art doesn’t resemble reality enough to be representative. But in this masterpiece we discover an exception. White Flag represents the reality of the American Flag. Still, it’s abstract. That distinguishes this painting.

It’s not the only distinction either. Somehow Jasper Johns gives us a representation of the American Flag without the meaning. That’s because there’s no American Flag here. He reminds us of this in a few ways. Johns removes the color and fabric elements. So, we’re left with stars and stripes. These symbolic shapes are significant. But they aren’t the whole flag. It needs fabric and embroidery, or at the very least, color, to be the flag. Or does it? Would you stand in the Metropolitan Museum of Art and pledge allegiance to this painting? Probably not. But I bet Jasper Johns would get a kick out of it if he heard that you did.

Some of his Flag paintings have colors – the right hues even. Johns disrupted the representation of others in the series by using different techniques. I also like his work called Flag I. This one includes two American Flags screen printed on paper. Red drips from the stripes. It’s not a masterwork, like White Flag. Still, this screenprint grants us context to better see why White Flag soars – an art world champion. I like the way Flag I presents the stars and stripes flipped sideways. They seem like a pattern separate from the American Flag concept in this format. Also, the bleeding and rough edges add intrigue to the frame. It’s messy and mysterious even if instantly recognizable at the same time.

A glimpse at Flag I reminds me of White Flag‘s grandeur. It’s not only huge. There’s also a glorious creaminess to the color. This flag isn’t a true white. That would make it a simple surrender. Black speckles and grey shadows peek through the encaustic layers – purposeful imperfections. This lack of polish makes it seem tangible. In fact, this masterpiece depends on what’s lacking. There’s not a lot here.

It’s why the materials Jasper Johns uses matter so much. With only newsprint and encaustic he reveals the American Flag’s inherent beauty. By creating a patterned object he also abstracted the flag from it’s true physicality. This highlights the fact that fabric flags are also mere symbolic objects. Thanks to Jasper Johns, we don’t need an actual American Flag to see the glory it represents. He stripped away the flag parts to remind us of this with a masterpiece of Abstract Art.

According to Johns, there were several reasons he painted White Flag and the whole Flag series. Part of it was personal. He vowed to himself that he’d never owe a debt to any other artist. This was around the time of the first Flag painting. In fact, he destroyed all his work to make a fresh start. Then, with the smoke still wafting off his art bonfire, Jasper Johns dreamed about painting the American Flag. Thus, a significant series in Art History canon was born.

How many Jasper Johns flags are there? 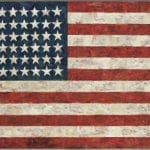 Along with his gigantic White Flag, Jasper Johns painted more than forty Flag pieces. None were as large. But they varied in significant ways. One even placed a vase on top of the American Flag. Others used multiple flags. In fact, Three Flags included several superimposed and features 84 stars.

All these flags were a gift to the art world. Not only because they offered more museums a chance to exhibit a Jasper Johns. They also created a context for understanding the significance of the entire series. His different portrayals each added a dimension to the overall impact of the flag as an image.

Who was Jasper Johns influenced by? 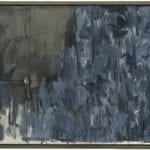 This is an ironic question. Johns destroyed all his paintings to obliterate any signs of influence from other artists. He then started over to forge a fresh path. This began with his Flag series in the mid-1950s. But he also already lived in an apartment adjoining Robert Rauschenberg‘s place at the time. They were friends who became lovers and deeply influenced each other’s work.

When this relationship ended Johns created a wonderful breakup painting (above). In Memory of My Feelings was a dark renovation for one of his famous Flag paintings. He slathered it in messy black brushstrokes then hung a fork and spoon far away from each other on the canvas. The National Gallery in D.C, included this in their 2010 exhibit exploring sexual orientation and gender.

Story behind the Flag series