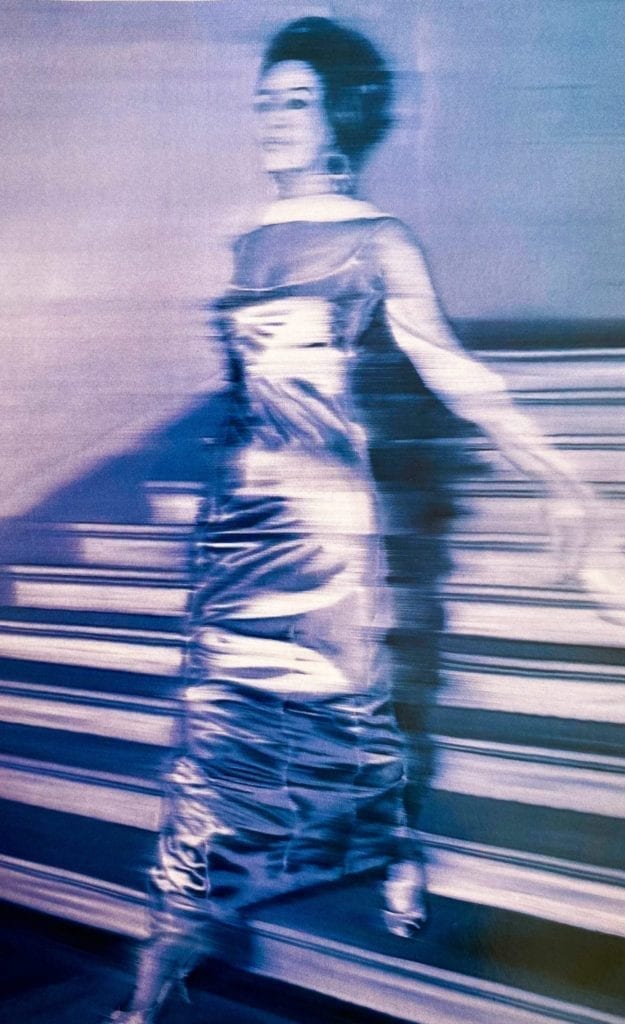 Here’s a few tidbits of introduction to the painting Woman Descending the Staircase:

The first time I saw a Gerhard Richter painting in person I thought he was a photographer. That’s his remarkable skill. Here, though, Richter works through opposites. His masterpiece, Woman Descending the Staircase illustrates this duality. He first creates a photo realistic work. Then Richter messes with it. Of course, he doesn’t always blur his paintings. Richter leaves some photo-realistic works crisp and pristine. These portray a meticulous reality. But sometimes he adds a step and also abstracts it.

Richter creates these abstractions when he points out a particular aspect of the piece. For instance, with his smudges of Woman Descending the Staircase. This adds a visual commentary. We see the ideal woman – ripped out of a magazine editorial – in a fresh way. So, that photo realistic ripoff from a fashion shoot becomes a critique of sorts. Still, its visual aspect grips our attention. The reversed meaning also matters, of course. But Richter’s blurring sets her in motion. It’s enchanting.

Photography and high fashion marry the fine art world with Richter presiding. This glamorous, well-dressed woman floats like a model. That’s because the painter plucked her out of a fashion magazine. He did this work in 1965. But she’s a timeless beauty. In fact, the painting feels as new today as it did the first time I saw it, twenty years ago. Much like a fashion model, Woman Descending the Staircase doesn’t age. Her lovely uniqueness transcends time. She’s a masterpiece.

Why did Richter Paint Woman Descending the Staircase?

Many art world thinkers called this a major move away from his photo realistic works. They declared it Richter’s new style. He didn’t like that much – hated it, in fact. Painting was his way of representing objects and subjects, he protested. Then said he planned on doing so in a variety ways and didn’t care about art categories. It was the subject that mattered to Richter.

Here’s one example of a quote from him. When asked why he blurs otherwise pristine photo realistic images.

I love this quote. It highlights Richter’s intense focus on his priorities. He’s got a laser pointed at a personal, painter goal. What the art world thinks about it makes no difference. In fact, Richter stated that he would continue to paint in any style he liked whenever he felt like it. Painting Woman Descending the Staircase wouldn’t stop him. He’d go on to make photo realistic or abstract expressionist works after this. His art wasn’t up to anyone else.

Even with his mysterious, rebellious reaction, we can still figure out a bit of Richter’s motive. That’s because there’s an element of Marcel Duchamp in Woman Descending the Staircase. Check out Duchamp’s Nude Descending a Staircase No. 2. You’ll see some parallels.

This painting shines as another iconic modernist masterpiece. It’s also assumed to be Richter’s inspiration. That’s because of the title as well as the radical painting of a popular subject. After all, beautiful women have always been a common inspiration for painters.

Duchamp distorts his nude woman so that viewers don’t see her nakedness in a literal sense. It’s a modern remark on the concept behind nude portraits. The subject moves in a replicated fashion, obscuring her private parts. This shields her nudity. Instead viewers see only her movement. No matter how naked, her body reveals nothing private. We see the same amount of it that we would if she wore clothes. We can’t know much about Duchamp’s woman. She’s a faceless symbol of nude women. This challenges former representations by painters. Nobody had painted a nude this way before. That’s because Duchamp isn’t really painting a nude woman, he’s portraying nudity itself.

That parallels Richter’s take in Woman Descending the Staircase. He also painted an unidentifiable woman. And his painting also conveyed a message about society’s portrayal of women. Richter uses a magazine image as a reflection of this. He floats her down the stairs, an elegant spectre. Of course, in the photo he used as a source image, this subject was on the stairs. As a static image, though. It was Richter who brought movement into the image. She sweeps down the canvas. That’s because he brushed the wet photo realistic painting of her with a dry paintbrush. His action set her in motion. So, much like Duchamp created a portrait of nudity, Richter did of movement. He kept every aspect of the source photo. From her stunning beauty and luminous dress to that elegant arm draped in a flourish of silk.

The muted colors show my favorite thing about Woman Descending the Staircase. It appears to depict a black and white photo. But there’s not really black or white in the painting. In person the light bits in the painting evoke a warm creaminess. There’s no bright white. Also the greys are more like blues and not dark enough to be black. This gives the painting a lovely subtlety. Richter’s blurring reminds us it’s not a photograph. But the colors reflect this very origin. It’s Richter’s moving combination of photography and abstraction that make this a masterpiece.

Who is the lady in Woman Descending the Staircase?

Richter keeps his subject’s identity a secret. Over the years there’s been lots of speculation, though. The painting remains a sensation with viewers. This creates buzz and lots of guesses float around the world. After all, the Woman Descending the Staircase looks a bit familiar. Many think the original magazine shot he used was a famous woman. Maria Callas and the Iranian Queen, Sorya, are two in particular. But I’d argue that the subject of this painting isn’t one specific woman. Rather, the painting’s about movement itself. Gerhard Richter presents this subject as a revelation. Thus the painting also becomes a commentary on photography.

Why is Gerhard Richter an important painter?

Richter breaks auction records with his work. He also tops most lists of great contemporary German artists. But his influence spans far beyond that as well. On record as one of the richest people in Germany, Richter isn’t a success only in terms of notoriety and money. He carved out a significant spot in the art world by introducing new concepts on canvas. It’s why he’s most known as a conceptual artist. Richter takes great care choosing subjects to paint. Then he portrays it with a whole new vision. Thanks to paintings like Woman Descending the Staircase, viewers see ideas as objects. Richter creates imagery that makes people think. That’s why he continues to matter so much.

Where Can I See Woman Descending the Staircase in Person?

This gigantic painting stuns viewers at the Art Institute of Chicago. I was surprised to find out it’s only a bit over six by four feet. Woman Descending the Staircase wields exceptional presence over visitors. The first time I saw it I was unfamiliar with Richter, as was my companion. But immediately after seeing the piece, they turned to me and declared Richter their favorite painter. In fact, this painting alone serves as reason enough to visit the incredible AIC. It seems like a cool but simple painting on a computer screen. But that shifts to a whole experience in person.

How much would a Gerhard Richter painting cost? 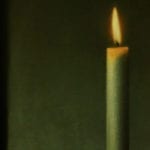 Let’s just say that 99% of us can’t afford a Richter. For instance, according to artnet $76.9 million worth of Richter’s work was sold at auction in 2010. That’s only auction sales and just for the one year. Still there’s always an exception to any rule. That’s why I found one case of a true bargain Richter painting.

He loved the 80s band Sonic Youth. So, when they wrote an album inspired by his work, Richter gave them a painting for its cover (above). This record, Daydream Nation, hit stores in 1988. Then Richter gave the band his original, 23 square foot painting for keeps. He also didn’t charge them a dime for the piece or its use on the cover.

Check out these other essays on German Paintings.

See it at the Art Institute of Chicago.