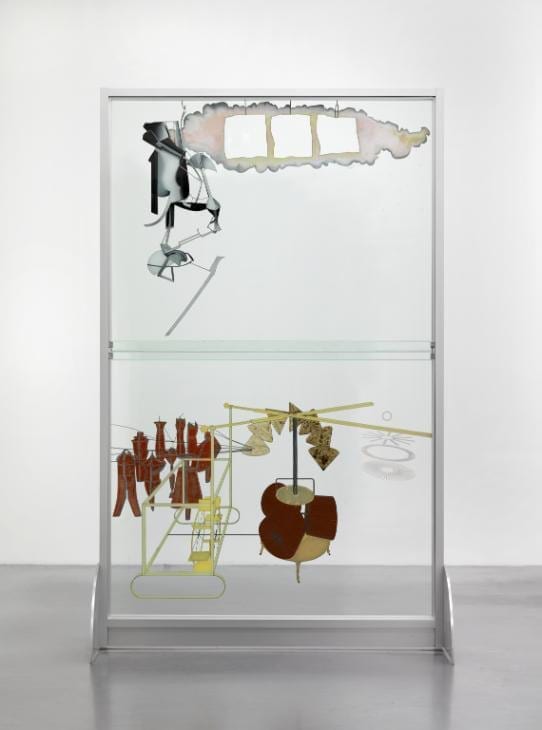 Marcel Duchamp’s painting The Bride Stripped Bare by Her Bachelors, Even has two frames. The top encapsulates a delicate silvery bride. She’s isolated and fragile. In fact, it feels a bit forlorn up there, as if our lady’s gazing out the window. The lower frame shows an opposite world. Thick and deep golden, the bride’s bachelors strut – bold and mechanical. There’s a machinery to them. She’s vulnerable while her male counterparts don’t even appear to have heads. It’s their bodies that lead them to her, Duchamp’s brushstrokes march them forth.

Click here for an audio version of this piece.

His portrait of the bride and bachelors strips the notion of romance from marriage. Men are robotic in this portrait. The woman seems distant to the point of being elsewhere. Not a lover of love, Marcel Duchamp adored working against commonalities. A famous artist painted to battle with art rather than uphold it. His true love was otherness. This painting shows a stunning example of this. It’s both a portrait of marriage and anti-marriage all at once. Duchamp in his element.

Marcel Duchamp created conceptual artwork on a level many artists only dream about. In fact, thanks to his high echelon ideas, Duchamp’s one of the most influential modern artists. For instance, The Bride Stripped Bare By Her Bachelors Even yields an intellectual impact. That’s because it’s both painting and anti-painting. On one level it’s two glass panels separated by immovable bars at the center. That’s the physical foundation of his overarching theme.

These bars divide the bride and bachelors. This undeniable physical divorce permeates the work. They can’t intermingle. Intimacy and connection between men and women remain impossible in this painting. Thus, with bars in the middle, the notion of marriage works like a prison here. The painting tells us that even on the precipice of a wedding, men and women can’t come together – not in any real sense.

It’s that old notion of knowing a person. Do we ever truly know each other? Duchamp says NO with this artwork. He creates a barrier to intimate knowledge. Much like his infamous Fountain, the main tonal element of The Bride Stripped Bare By Her Bachelors Even remains clinical. Toilets are cold and unyielding, much like the relationship portrayed in this painting.