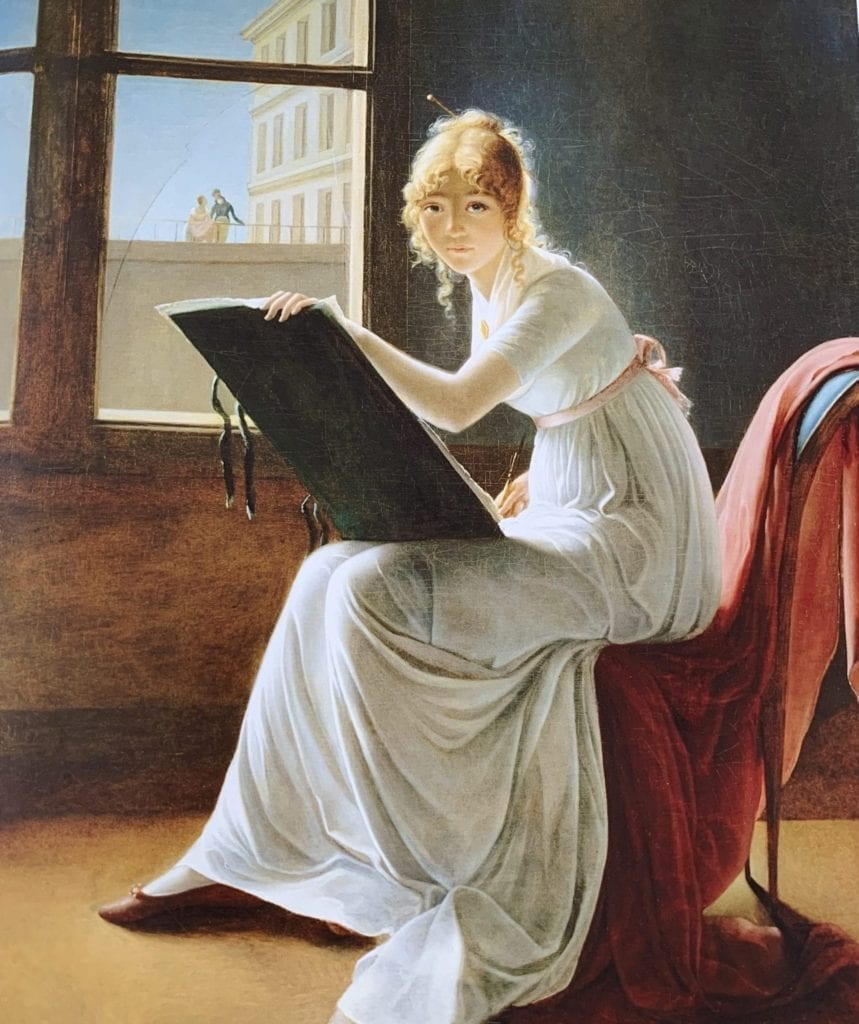 This painting, Young Woman Drawing by Marie-Denise Villers meditates on love versus art. Art wins the contest here. This piece works as a rumination on the self and identity too. That’s partly because of the subject matter. But the situation behind the work tells that story as well. When the Metropolitan Museum of Art got this work, Jacques-Louis David got credit for it. At that time art critics declared it a masterpiece. He was, after all, an acclaimed artist.

But soon after facts revealed Marie-Denise Villers as Young Woman Drawing’s true creator. That revelation wiped the Vaseline off critics’ lenses. With newfound clarity of vision they saw problems with the piece. Proportional issues and other imperfections came to light. She plays with imperfections to make a point in the piece, though.

Take the cracked glass in the pane behind her. It arcs over two lovers on the roof outside. They’re boxed in by the limitations of their relationship. The window, roof and building around them represent this cage of love’s definitions. It was 1801. So, relationships meant strict borders… especially for women in those times.

This appears to be a self portrait of Villers. Turns out it’s actually a portrait of Mademoiselle Charlotte du Val d’Ognes. The painting first belonged to her family. Still, it does portray a woman artist at work. So, in a way, it’s also a self portrait for Villers. After all, Charlotte’s shown looking into our eyes, a simulation of her reflection in a mirror.

The Young Woman Drawing has no boundaries in her luminescent halo of light. She’s enraptured in the artistic process – free. Her life as an artist feels pure and light in this calm self portrait. The portrayal enchants us with her evocation of joy in drawing. She revels in that zone of productivity all artists seek. It’s a true freedom and the feeling of love it rouses has no limit.

In a way this portrayal of Charlotte du Val d’Ognes also shows the artist Villers painting herself. But it’s a younger and more innocent version of this gifted woman artist. Marie-Denise Villers was twenty seven in 1801. The girl in her painting, though, appears not quite twenty for the time. After all, 220 years ago we didn’t age with as much grace. People were already considered quite middle-aged at twenty seven.

Marie-Denise revels in youth with this angelic portrait. The Young Woman Drawing’s hair glows, soft and clean in a bath of pure light. She’s an ethereal beauty. The clear and direct way her eyes connect with us as viewers grounds her as a real person, though. This artist feels real to us even as her image radiates with innocence. A married woman at the time of this painting, it’s unlikely Villers herself was 100% pure of body. But when it came to art and devoting one’s life, this lady was blue-check verified. She came from an artist-packed family and Marie-Denise studied with some of the greats as well. Her mentors included Francois Gerard and Jacques Louis-David. The latter’s influence was likely a reason Young Woman Drawing was mistaken for his.


In those days most women gave up their work upon marriage. Marie-Denise Villers was an exception. She continued to paint as a pro until death. Art held the key to her heart. Instead of losing herself in her marriage, she fell into the painting flow. This feeling emanates through Young Woman Drawing. We know the artist likely looked at herself in the mirror. But it feels like Villers has caught us watching her. Those brilliant eyes capture us. It’s because she’s so rapt in her painting, lost in it, that we’re enthralled by her gaze. She’s fixed on work while we’re transfixed by her gaze.

Where can I see the Villers painting Young Woman Drawing in person?

Young Woman Drawing was a favorite of mine in the Museum of Fine Arts Houston. At the time of my visit it was on loan from the Metropolitan Museum of Art in NYC, though. Turns out I was lucky to see it. Last time the Met exhibited this painting was in the year 1971. So, it’s not currently shown in the physical museum. But you can view this masterpiece of French Painting in their online collection.

Are there other titles attributed to Young Woman Drawing?

The painting started out as a portrait for the Val d’Ognes family. It captures the beauty and appeal of their daughter Charlotte du Val d’Ognes. Commandant Hardouin de Grosville then inherited the painting from his family. So, when it sold to baron Maurice de Rothschild, her name was used as the title. This masterpiece remained entitled Portrait of Charlotte du Val d’Ognes until the 1980s. It’s held the title Young Woman Drawing since that name-change.

What is the Metropolitan Museum of Art’s policy when attributions in their collection come into question?

The Met bought Portrait of Charlotte du Val d’Ognes in 1917. They believed it was a Jacques Louis David work. Then curator Charles Stirling questioned this. In 1951 he documented his doubt, writing that he believed a lesser known woman more likely painted this. As per the Met’s policy on authoritative questioning like this, they stripped the painting of its former title and creator. Then in 1996, Margaret Oppenheimer proposed Villers as the painter and this was soon declared official.

Why is Young Woman Drawing an important painting?

Public Intellectual and writer Germaine Greer wrote about Young Woman Drawing as a feminist painting. The Louvre Gallery set the location for this painting. In those days it was where women artists taught other women how to paint and draw. This portrait is also a woman painted by another woman. Many feminists thus use this masterpiece as an example of feminist artwork. It’s women supporting women in the art world.