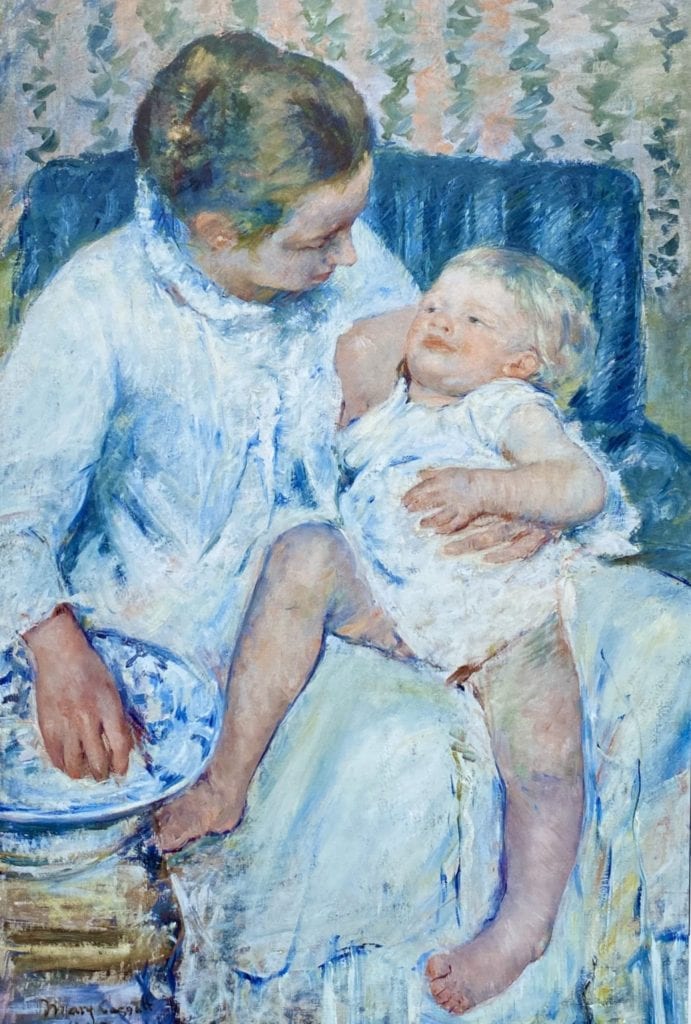 Mary Cassatt’s painting Mother About to Wash Her Sleepy Child dwells in motherhood. Its careful composition combines with a smudgy Impressionist technique. This painting captures a moment of messy mothering. A child’s face tells the story. In fact, we don’t even see the mother’s face. She seems lost in the toddler’s expression. Cassatt directs our attention to how the child feels. The mother’s priority thus becomes the viewer’s focus.

Moments like this mark motherhood transitions. Getting a toddler’s bath in before bedtime can be a challenge. But it’s also sweet and cuddly in this painting. There’s trust in the child’s face combined with resistance in their awkward position. Cassatt’s cold blue paint traces frame those squirming legs. While coral smudges color and highlight sweet vulnerability in the child’s face. Sometimes cranky can be cute, especially when it’s your kid. These are classic toddler traits, after all. It’s natural. Growing up means lots of combos and transitions like this

This piece marks a transition point for Cassatt’s career too. At this time Impressionist influences were at their peak in her work. She was a friend and student of the eminent Degas and it showed. For instance, Impressionists obsessed over the color white. Her brilliant use of it here creates movement, light, and a profound evocation of feeling. But this painting began more than a series of Mother and Child themed works. After this her work transitioned to more solid and less Impressionist portrayals.

A quick glance at Mother About to Wash Her Sleepy Child reminds viewers of Impressionism. Emotions flow from this image. The blurred edges and keen whites telegraph this as well. Many Impressionists also worked with intimate daily life subject matter like this. But the piece’s framing composition points to yet another influence.

Cassatt cropped the scene on both sides. This was a favorite technique of Degas. He’d borrowed the practice from Japanese prints. This framing device also tilts the entire scene up a bit. So, this snug story of Mother and Child compresses into a narrowed foreground. Mary Cassatt then intensifies this verticality with upholstery and wallpaper stripes.


Mother About to Wash Her Sleepy Child also shows Cassatt’s mastery in surface design. She balances the painting’s tone with careful patterning and brushstroke methods. This gives the masterpiece its comfortable effect. We know they’re at home not only because it’s bath time before bed. The setting resonates with a cozy vibe. These are key qualities from Japanese prints from that time – 1880. They were cohesive with consistent patterns that served to balance the piece’s overall tone.


Cassatt’s art had these qualities early on. But most in art history don’t point to Japanese prints as an influence until her later work. Looking at her early paintings they tend to focus on Cassatt’s lovely Impressionist figures. Her ensuing pieces grew more solid. She left Impressionism behind in many ways as years passed. The Japanese print influence remained in her wheelhouse, though. Cassatt continued to use it with reverent mastery.

Mother About to Wash Her Sleepy Child – FAQs

Where can I see Cassatt’s painting Mother About to Wash Her Sleepy Child in person?

This painting lives in the Los Angeles County Museum of Art (LACMA) collection. But it’s not on public view in person. The largest museum in the American West, LACMA is currently under demolition. Though now reduced to piles of rubble, the brand new version of this beloved museum’s set to open in late 2023.

Why is Mother About to Wash Her Sleepy Child an important painting?

Mary Cassatt was an exceptional painter. This masterpiece helps us see some of the reasons why. Degas hand-picked Cassatt to join his Parisian set of Impressionists. She was one of three women and the only American in the group. Like Degas, she loved and collected Japanese prints. This influence shows in the composition of Mother About to Wash Her Sleepy Child. The painting’s an iconic example of Impressionism at its most tender and personal.

Why did, the unmarried and childless, Cassatt paint on the Mother and Child theme?

The common art history theory for Cassatt’s Mother and Child paintings may be wrong. Mother About to Wash Her Sleepy Child has the date 1880 under her signature. It’s often cited as her first painting on this subject. Cassatt biographer, Achille Segard, said it showed at the Paris Fifth Impressionist Exhibition. That was in April of 1880.

Art historians often say Cassatt’s time with nieces and nephews inspired this series. She saw them during her brother, Alexander’s, visit to her home in Paris. But he came to see her in France over the summer of 1880. So, both claims can’t be true. Either she started painting on this theme before her brother’s visit. Or her biographer, Segard, was wrong about the exhibition.

Was Mary Cassatt an American or French painter?

The American Cassatt painted her best and most famous works in France. So, her life as a painter was mostly French. But the woman was a true American and that shines through her work. For one thing, it set her apart among elite French Impressionists. She joined their group along with Degas, Pissarro, and Courbet. Cassatt held her own among them. She’s known to this day for her fresh takes on familiar subjects. Void of sentimentality, Mary Cassatt’s paintings feel tender and true blue.

Enjoyed this Mother About to Wash her Sleepy Child analysis?