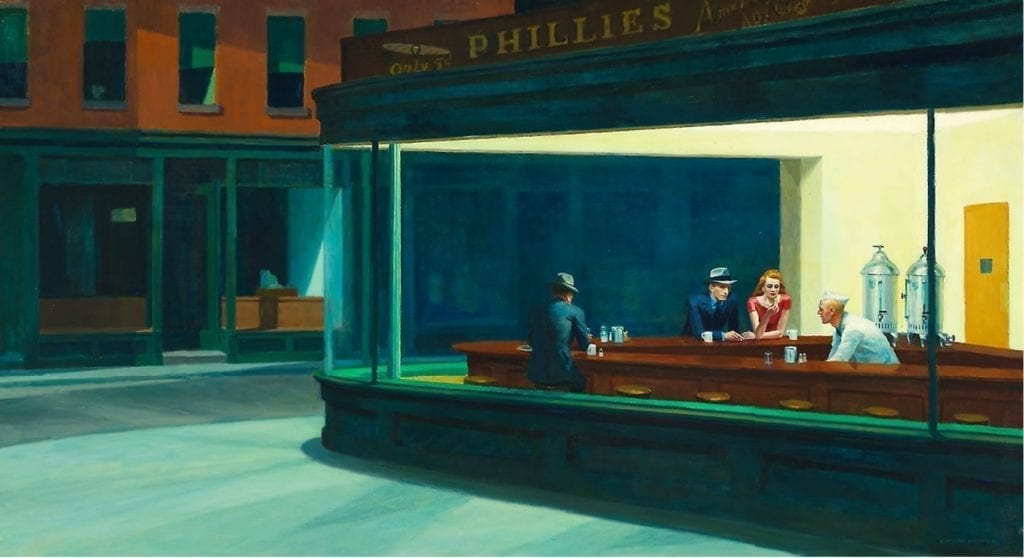 You know it. You might even love it. But why is Nighthawks by Edward Hopper so cool?

Edward Hopper’s masterpiece Nighthawks conjures big city themes. From loneliness to anonymity, it’s an existential homage to New York City in 1942. Details shift from surreal to familiar. But they all point to the same conclusion. Though its title refers to predatory birds, this painting’s about the human condition.


The Nighthawks diner remains remote from viewers. There’s no way in for us other than observers. The diner also offers no exit for the customers at the counter. That’s because it lacks an exterior door. Inside there’s a door only for the cheerful worker in white. This makes sense because he’s got his own thing going. It’s a temporary situation for him. So, he half smiles. After this shift he’ll leave through his very own interior door to a life outside this place where he has a home. The other characters in the diner aren’t so lucky. There’s no way out for them.


Hopper spoke of the “three characters” in this painting. The worker stays separate. That’s clear thanks to the triangle of counters around him – like a fence. He’s also clad in exuberant white – hat, jacket, and pants. Hunched shoulders are the one trait he shares with the customers. But he’s only in this position reaching under the counter for work. The trio on the counter side hunch as if hiding or bummed. They slouch under an invisible burden. With his trio of customers, Hopper gives us a visual representation for carrying around a bad day like a backpack.

Dark colors and Hopper’s distinctive style set Nighthawks in an urban world. Two mere patches of light illuminate the entire piece. A pale yellow frames the trio of customers. This locks them inside the diner and also creates contrast between them and the worker. He’s part of the lemony light slice. But the three customers sit trapped before a murky black background. They’re slumped in darkness.


Meanwhile, a light green patch colors the street outside. It’s another shade of the fresh grassy green framing the diner windows. These separate Hopper’s trio from the bright freshness of the real world. After all, green isn’t only the color of grass, it represents life itself. Notice, the green border ends before reaching the three customers. They don’t live in our world. Where they do actually live is part mystery and part misery.

The Story Behind Hopper’s Nighthawks Painting

Thanks to Edward Hopper’s techniques, we know little about the customers in Nighthawks. In fact, he made them anonymous on purpose. The American painter did this by using himself and his wife, Jo as models. He did this a lot in his work. This process makes Hopper’s characters Jane and John Does. They lack identifiable names and faces in this masterpiece. It highlights their alienation.

Each of them also sits beside a nondescript white mug. This hints that all three are there for a cup of coffee. The two enormous coffee urns behind the worker also point to this conclusion. Who drinks diner coffee late at night? It’s a mystery that Hopper wants us to ponder. We know that most evening coffee drinkers are not headed out for some fun. They’re likely working late or at least stuck in a deadline time crunch. The man and woman customers facing us also look miserable. And it’s not only because that coffee has likely been sitting in those urns all day.

Hopper painted this soon after the Japanese bombed Pearl Harbor. Especially in big cities, America was struggling with aftershock and fear. Hopper’s wife, Jo, kept detailed diaries. That’s how we know he painted Nighthawks in reaction to this historic horror. Before the surprise attack, Americans believed we held significant control as a world power. Then Pearl Harbor woke us up to a harsh reality. The U.S. reeled with psychic trauma as a re. New York City (where Hopper lived) braced in rumination with fear of being the next target. This painting portrays that grief-stricken anxiety.

Nighthawks evokes palpable misery with telling specifics. The customers’ faces droop – hawklike and grim. The man and woman touch fingertips. But it’s not quite a connection. He’s more invested in his cigarette. She’s gazing at a white slip of something in her hand. Their distractions and pseudo-contact keep the painting relevant after almost eighty years. It’s a portrait of existential dread and loneliness as a modern urban experience. Viewers relate to this generation after generation. That’s because it taps into a universal longing for connection. No matter how many people surround us in the big city, nobody’s content without a real connection. Hopper grants viewers a sense of yearning in Nighthawks. He offers us a world of loneliness in this spare and poignant masterpiece.

Why is the Nighthawks painting so famous?

Many art historians place Nighthawks in the category of genre painting. That means it fits into a niche – this one’s Existential. In Hopper’s case, that sits under the umbrella category of American Realism. There are other types of Existential paintings, of course. It’s a universal human experience. But Hopper epitomizes the American Realist version.

That’s not only because he paints American scenes. Hopper holds a unique position in the American Art History canon. Many painters love to portray America’s spirit of individualism. But their paintings often soar with the joy of competition and/or reaping rewards. Instead, Hopper’s work captures a sense of isolation. It’s glorious that we encourage individuals to rise to the top in the United States. Still, Hopper reminds us that it can get lonely up there.

Is there a bird called a Nighthawk?

Yes, indeed. This nocturnal bird can be difficult to spot. That’s because they’re good at hiding and tend to come out in the dark. Nighthawks hide their nests well to protect their young. So, you’re best chance to spot one’s in the evening sky.

We can see from these facts why Nighthawks are the perfect bird for Hopper’s painting title. The customers slump over as if to hide. Nighthawk birds are into hiding too – for survival. Also, what’s a more nocturnal experience than drinking coffee at night? In the night sky they swoop far away as isolated individuals – remote from us. Hopper’s subjects are the human equivalent of this mysterious bird.

Why is Edward Hopper an important painter?

Hopper painted with a unique lens. His distinctive American Realist work influenced Pop Art and the New Realist movements of the 60s and 70s. Many believe his portrayal of the American experience arose from depression. This presumes he couldn’t help but paint sad subjects due to his mood. But many depressed painters do quite the opposite. That’s because painting’s about choices. These may drift into the unconscious with some artists. Not Hopper, though.

Edward Hopper was ultra conscious about his work. We know this from copious diaries he and his wife kept. Sure, they record a history of depression. Still, they track his careful planning, sketches, and goals for each painting. We can sense this care in the photographic quality of his compositions. He also gives us anonymous, gloomy subjects. Usually he managed this by modeling himself and his wife. Hopper used this method to perfection in Nighthawks. They even look a bit like bird faces. His purposeful process shows Hopper’s goal to portray themes of isolation and loneliness. Why he chose to paint using that particular lens…. that’s a more mysterious matter.

How many paintings did Edward Hopper create? 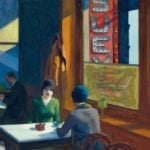 The short answer is 182. But Nighthawks stands out as his most famous work. Funny fact: this masterpiece sold to the Art Institute of Chicago for only three thousand dollars just months after completion.

In contrast, Hopper’s 1929 painting Chop Suey (above) sold for $91.9 million in 2018. One of the reasons his work increased in value so much is how few Hoppers exist. Demand continues to rise while each of his works remains a rare gem.

Sale of Chop Suey according to the NY Times