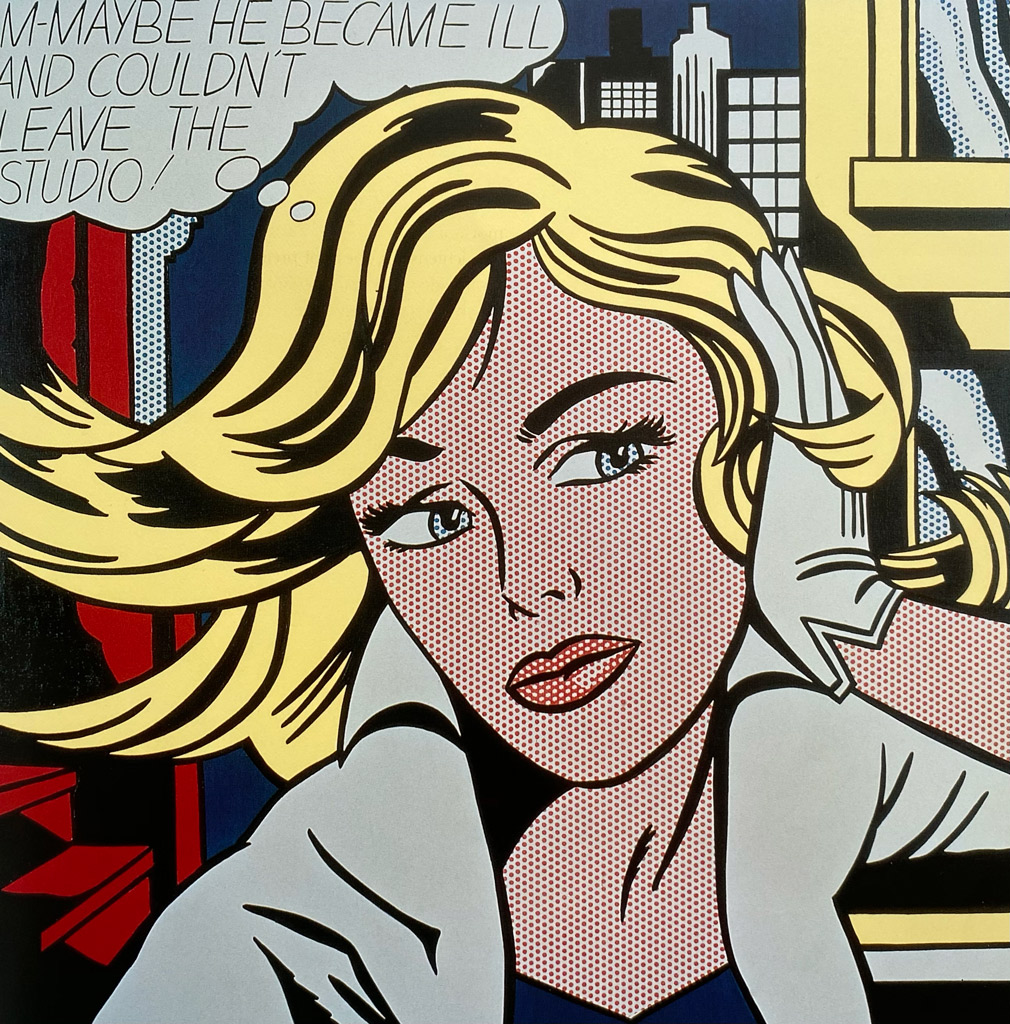 Learn more about the painting M-Maybe (A Girl’s Picture):

Roy Lichtenstein’s pop art painting M-Maybe reflects childhood comics. It commands our attention with nostalgic dots. They evoke the newsprint of yesteryear’s comics. Still, Lichtenstein uses this technique in only two facets of the painting. He differentiates aspects within the portrait. Lichtenstein uses dots to color the woman’s face and skin as well as reflective surfaces.

The Pop Art painter thus emphasizes her most human traits with this choice. He also reflects that back to us, the viewer. Mirrors are the only other polka dotted parts of the painting. That’s how the artist communicates the painting’s theme – being human. It’s an ironic painting. But there’s no mocking here. He elevates the art of comics rather than dismissing it. We see that in the careful reworking of comic representation here.

This woman shows human traits. But she doesn’t deign to be human herself. Like any woman in comics, she’s not realistic. This is iconic representational art. She represents a fantasy – the artist’s ideal. A gorgeous woman who longs for him. This blonde bombshell is iconic. Abandoned, she thinks only of a man who isn’t there. Assuming the best of him, she doesn’t consider herself at all. This embodies her with the ultimate devotion to the artist. The canvas bursts with this perfect woman’s love and longing for the painter.


But this masterpiece isn’t about him. It’s about us, the viewers, and society. American Painter Lichtenstein points this out with the reflective bits of the painting. That’s so we ask ourselves why she represents our societal ideal. Comics often ask us the same question with their representations. Why do we so often prefer unreachable, ideal women to real ones?

Many art historians cite M-Maybe (A Girl’s Picture) as a primo Pop Art example. That’s because it’s familiar, memorable, and fits the genre so well. Pop Art dawned in the mid 1950s. But it’s always feels fresh and bright. This movement added a new wrinkle to the art world. Pop Art works as a reflection. It doesn’t raise awareness about the subject of a painting or even the artist. Rather, it’s about us – society. Pop takes on popular culture. It holds a mirror up to the mainstream and, when the artist adds brilliance, makes a masterpiece. In Lichtenstein we find an exemplar of this.

This painting works well as a Pop Art icon because it’s equal parts funny and pointed. Viewers are much more willing to see ourselves in a piece if it’s fun. M-Maybe (A Girl’s Picture) feels like a soap opera, comic book, and masterpiece all in one. More than one slice of pop culture – it’s a whole pie. There’s high drama in romantic relationships exemplified by daytime soaps. We see this in our bombshell’s gloved hand gesture and tilted head. Her idealized facial features show a fleeting sense of emotion. Just as in a daytime drama on network TV, we know how she feels based more on words.

But they aren’t her words. They sit in a bubble above – not because she actually thinks them. No. These thoughts were assigned to her by the artist. He chose them with care to make himself the absent hero of the piece. It’s the touch that elevates this into a masterwork. Comics have special qualities. Heroes are one such facet. Newsprint dots also set them apart. Word bubbles are another characteristic. They convey character thoughts and speech. Lichtenstein also uses primary colors. Comics often do this too. It keeps the visual experience simple and the focus on storytelling.

Lichtenstein’s tight use of space spotlights another unique comic quality. Comics tell complex stories within a short series of small boxes. Limitations like this can be a gift for artists. They’re forced to create new pathways for expression. That’s why filmmakers often get storyboarding ideas from comics. After all, comic artists are masters of fitting narratives into small frames. We can see this highlighted in M-Maybe (A Girl’s Picture). Lichtenstein’s framing of the woman with exterior windows and buildings. With this peak into the outside world, he reminds us that she’s not alone. This woman represents the mainstream world’s idea of a lonely woman, though. That’s the irony of the painting.


Pop Art swims in irony. It’s representational and reflective. Most important, it reminds us what we care about. Whether we say it’s our guilty pleasure or flat out admit we love it, popular culture’s tons of fun. Pop Art points this out. Not with judgement or mockery – but with insight. There are reasons we love it. Soap Operas delve human relationships with extreme and gripping storylines. Comics weave intricate stories into concise visual maps. That’s why Lichtenstein’s M-Maybe feels so familiar and fun. So, viewers are happy to look a little deeper. That’s where we see the insightful reflection and pop representations that make this work a masterpiece.

Where can I see Roy Lichtenstein’s M-Maybe (A Girl’s Picture) in person?

How did Roy Lichtenstein create his work? What techniques did he use?

In most cases it’s unwise to attempt mindreading an artist’s intentions. But we know for certain that Lichtenstein wanted his work to appear machine-made. He portrayed mass culture. These paintings demand a cookie cutter look. That’s why Lichtenstein often used stencils. How else could he achieve the feeling of a commercial print? Thanks to this, they have sharp edges and clean features. It’s no wonder that Lichtenstein’s work lives on with woodcut prints. These offer a more affordable way to own his work outright.

How much are Roy Lichtenstein paintings worth?

Roy Lichtenstein’s paintings increase in value. This has been especially true in the 2000’s. In 2005 the most anyone had paid for a Lichtenstein was $16.2 million. Yes, that’s a ton – no question. But his paintings are going for three times that these days. For instance, in 2010 and 2011, two Lichtenstein paintings sold for $42 and $43 million.

What is M-Maybe by Roy Lichtenstein worth?

It’s highly unlikely this painting will ever go up for auction. So, it’s monetary value remains moot. However, its financial history’s quite unique. That’s because this Pop Art masterpiece was purchased only once. M-Maybe (A Girl’s Picture) also never left its first owner – Peter Ludwig.

Lichtenstein held his first solo show in 1962 at The Leo Castelli Gallery. Three years later he showed M-Maybe at the same venue.  German collector, Peter Ludwig, asked Castelli, who owned the gallery, how much the painting cost. At the time Lichtenstein’s sold for around six thousand dollars. The gallery owner quoted Ludwig twice that at twelve thousand. Somehow, in the end, Peter Ludwig paid Lichtenstein thirty thousand dollars for this masterpiece. That’s the magic of art world sales at work.