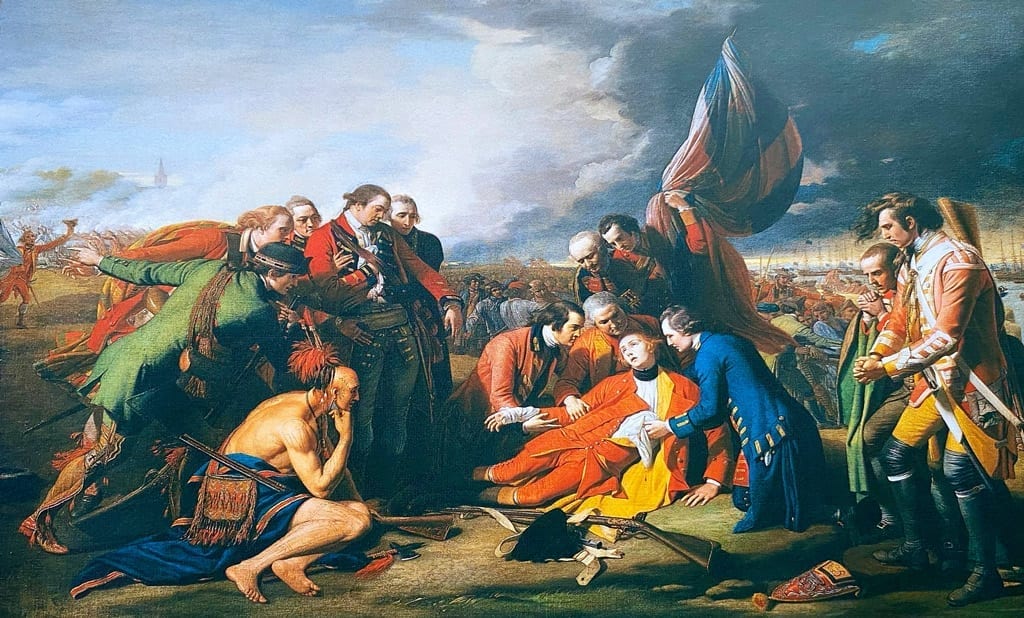 Learn truths behind the false spectacle of West’s painting The Death of General Wolfe such as:

Benjamin West’s The Death of General Wolfe is a near perfect History Painting. Not because it’s accurate. Rather it sets a prime example of West’s reinvented genre. With his buddy, John Singleton Copley, West created a new form of history portrayal. The duo painted current events with dramatic flair. Before them, History Paintings stuck to Classical and Bible stories. These artist friends thus founded contemporary History Painting.

For instance, the General falls with tragic grace at the center of The Death of General Wolfe. This had just happened in 1759, during The Seven Years War. Eleven years later West weaved artistic license into it. In truth, Wolfe took three musket balls at the height of battle. There’s no way he died with such elegance. He appears to float into the arms of his compadres, gentle as a feather.

It’s also unlikely that a Native American watched with calm contemplation, kneeling nearby. The figure served two crucial purposes for West, though. First, they place the setting in the New World. And foremost, that excites the painting’s English audience. Yes, Benjamin West was an American Painter. But he did this during his time in England.

The Death of General Wolfe demonstrates sensational storytelling. It illustrates the event with all five senses. A gunshot rings through the air. It reverberates through the central hero’s outstretched body. The flag nearby billows in a soft breeze. The battle has blown by like a frigid Winter storm.

Icy tragedy remains in its wake. But brilliant colors shoot through the painting like Spring blossoms. There’s privilege to these hues. Each jacket signifies a paid for position on the canvas. These “soldiers” weren’t at the actual event. But they shelled out to be in the painting. Thus, each dapper model bought a place for his face in history.

Benjamin West cements them into memory with details and sensory triggers. He stirs feelings in us thanks to these reminders. Visual cues like a gust of wind, a bright red jacket, a discarded musket, and bare feet in grass are all familiar. It’s one of the ways art reaches us over centuries. Sensory delights tap into our experiences. After all, dying in battle can’t be familiar for us mortals. So, how does this painting tap into our universal unconscious with such finesse? Heroism.

Make a Hero Out of a Mere Man

The Death of General Wolfe contains keen hero ingredients. Adoring acolytes surround our man-of-the-hour. Their poses forever make the point for him. After all, he’s occupied by a trio of musket balls. That’s another heroic trait – inaccessibility. Heroes stay out of reach for good reason. Somehow our champions are both better than us and more vulnerable. Their strength lies in this mix. General Wolfe dies before us – a wilted lily. Nothing’s more vulnerable than death. Yet he’s the star of the piece – its powerful central figure.

The General’s dead. Yet he’s also, by some means, running this show. It’s not his expression or posture. Taken on his own, the man looks like he needs a fainting couch. Wolfe’s setting and ardent fellows grant him power. One attempts to save him. If we look closely, though, his compatriot seems to dab at the General with a white silk kerchief. That’s not quite going to do the job. It points to the inevitability and certainty of death. Nothing and nobody can save our hero now. But they’re sure going to try.

West also creates a hero icon here by keeping The Death of General Wolfe bloodless. How does Wolfe die from three musket shots without bleeding? He’d have to be more god than man. With this choice of purity over reality, West elevates our hero from the human to the sublime. Shot three times, the man doesn’t bleed. He’s beyond mortal. This is how artists make a hero out of a man. It’s also how Benjamin West created a masterpiece.

The Death of General Wolfe – FAQs

Where can I see Benjamin West’s painting The Death of General Wolfe in person?

This marvelous painting hangs in the National Gallery of Canada, Ottawa, Ontario. Built in the early 1980’s, this enormous granite and glass building opened in 1988. It doesn’t just house more than ninety thousand works of fine art. There’s also an extraordinary sculpture outside it. This glorious spider has to be experienced to be believed. Maman’s her magnificent name. She’s the work of the brilliant, feminist artist, Louise Bourgeois.

Why was General Wolfe important?

Major General James Wolfe was an 18th century historic icon. He’s considered Britain’s greatest military martyr from the period. That’s because he led troops against the French in their seven year war over the Canadian and American colonies. Wolfe died in the Battle of Quebec for the British in 1759. But the British troops won thanks to his leadership. This win secured English rule over the unified colonies of North America against France. That’s why The Death of General Wolfe resonates with such power. It depicts this combination of British victory and loss with sensitivity.

In the arduous and long Battle of Quebec, Wolfe defeated the Marquis de Montcalm’s French force. His British forces captured the city. This meant the end of French rule over Quebec. Though he won this siege, Wolfe died on the Plains of Abraham. It’s unknown who shot the three musket balls that killed him. The General thus became an icon of the Seven Years’ War and the British territory expansion that followed.

Why did Benjamin West paint The Death of General Wolfe?

The Prince of Waldeck, Germany commissioned the painting from West in 1776. The masterpiece then lived in Arolsen Castle of Hesse, Germany for 150 years.*1

Right before this commision, in 1775, the Prince rented out Waldecker troops to Great Britain. He sent 1,225 of his men to fight in the American Revolutionary War for the British side. Soon after losing 720 of his countrymen for the cause, he commissioned this painting of the most iconic British military martyr of the period. *1

ENJOYED THIS The Death of General Wolfe ANALYSIS?