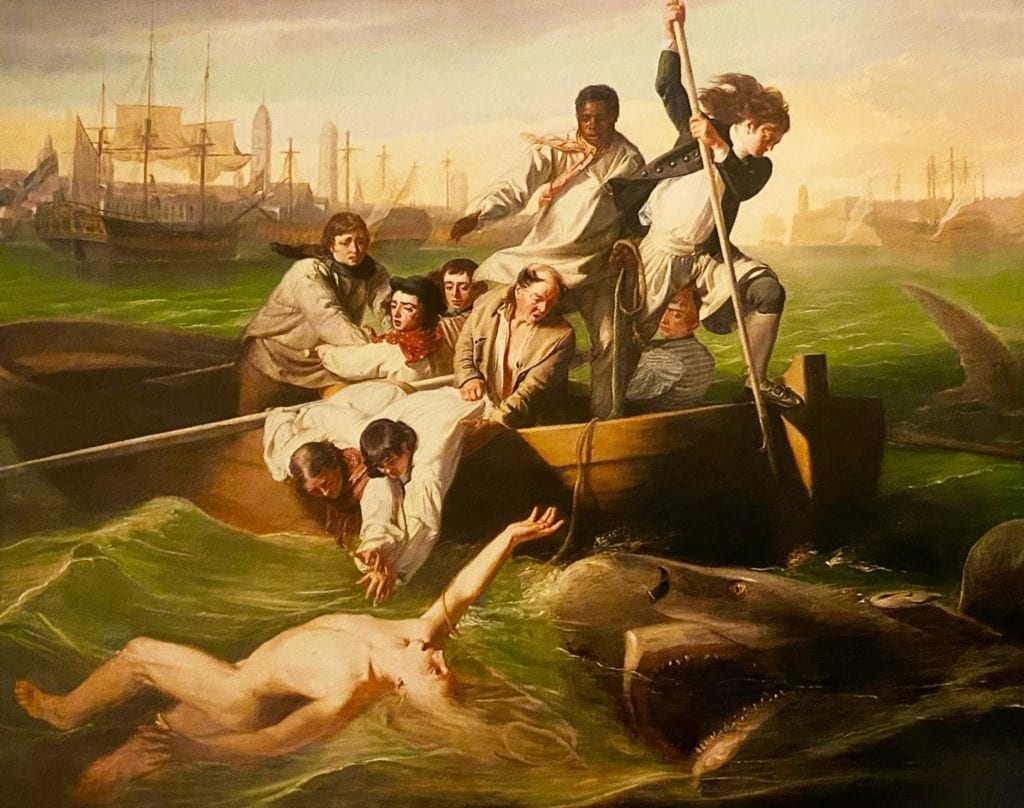 Find out fun facts about the painting Watson and the Shark for instance:

The painting Watson and the Shark tells a dramatic story. So much so, it made the painter famous. Before this, John Singleton Copley painted portraits. He made a name for himself portraying leaders like Myles Cooper, Thomas Gage, and Paul Revere. But Copley married into a stringent Tory family. So, in 1774, the American Revolution inspired his move to England. This changed his work. No longer painting gentlemen and lady portraits, he became a storyteller. In fact, with painter friend, Benjamin West, Copley created a whole new kind of art. They started what’s now known as History Painting. These pieces tell stories, often of heroic figures facing danger, in a historic manner. Watson and the Shark exemplifies such a History Painting.

Art historians often point to this painting as the reinvigoration of Copley’s career. After all, he couldn’t paint colonial characters anymore on British soil. He had to start over anyway. Lucky for us, he did it with drama. This painting has it all: nudity, imminent violence, heroism, and the funkiest shark of 1778. John Singleton Copley took General Watson’s tale from youth and crafted a masterpiece.

Watson did in fact survive a deadly shark attack. When he was fourteen, Brook Watson had been swimming in Havana Harbor. The shark attack took his leg and would have killed him if he hadn’t been lucky enough. But Watson was a lucky boy. A boat crew saved him. So, the future General lived to tell the tale that would inspire this famous painting. General Brook Watson never forgot that shark attack. That’s because it took his right leg, crippling him for life. But thanks to his commission of Watson and the Shark, his heroic story lives on too – as long as the masterpiece does.

Painting History as it Happens

General Watson would have made history regardless of this painting. He was Sheriff and then Mayor Lord of London. After that he led the Bank of England as its Director. Yet his political competitors and peers often mocked Brook’s shark tale. They were unimpressed by his accomplishments. One even wrote a poem about him saying:

Oh! Had the monster, who for breakfast ate

Had scarce supply’d him with a head so good.

It’s no surprise Watson would want a more heroic narrative for his legacy. Close ties with John Singleton Copley gave him the idea. He’d fight poetry with painting. Turns out the color and drama of a sensational portrait have massive impact. With this work, Watson rewrote his own history. It’s a masterpiece of heroism. Not only was this guy Mayor of London and head of a major bank. He survived a terrifying shark attack as a teen.

There’s a powerful lesson in this. Watson took his weakness – that peg leg – and made it a badge of honor. After this painting impressed the masses, it was more than a mere walking hindrance. It was proof of his resilience. After all, if he was able to endure ferocious shark jaws, what else might he overcome? A few lines of poetry certainly can’t hurt such a formidable force.

It made little difference that the painting wasn’t quite factual. The shipmates who saved him are not these men. That shark isn’t quite accurate either. But that’s not a surprise. Sharks were hard to spot in 1778. Forget getting an actual model for one. With that in mind, Copley did a stunning job. This shark’s a beast and he’s got the choppers to prove it. In fact, the painting’s composition puts the shark and Watson face-to-face. It raises the dramatic pitch of the portrait. Wind blows furious. Desperate men reach for each other’s outstretched hands.

It’s naked life and death at stake. No matter how much viewers come to this painting knowing about its subject, we’re pulling for the young, vulnerable and flailing Watson. Get him in that boat! Classic underdog marketing works magic through the ages via masterpiece.

Watson and the Shark – FAQs

Where can I see John Singleton Copley’s Watson and the Shark in person?

This remarkable History Painting adds flair to the National Gallery of Art in Washington, DC. Many fine masterpieces make their homes at this venerable institution. These include Two Women at a Window by Bartolomé Esteban Murillo and A Princess of Saxony by Lucas Cranach the Elder.

How did Brook Watson get attacked by a shark in real life?

Orphaned before the age of ten, Watson grew up with his aunt and uncle in Boston, Mass. His uncle was a merchant and thus got his nephew a job on his ship crews trading with the West Indies. On one such journey Watson went for a dip in Havana Harbor, Cuba. A shark attacked and nearly killed him. Thank goodness his ship’s crew were able to save him. Though he did lose his right leg in the debacle.

What type of art is Watson and the Shark by John Singleton Copley?

This piece fits into several painting genres. But its most significant as a History Painting. That’s because Copley founded this category alongside Benjamin West. Also Watson’s heroic portrait was the painter’s most lauded work. It brought Copley fame and fortune in England when he was a newcomer.

Watson and the Shark fits into the Animal Painting genre as well. The shark seems far more significant than a mere fish here. Copley portrayed Watson’s shark with the power of a ferocious monster. This is a key element to the Animal Painting category. These works give animals attributes beyond realism to elevate them. They thus represent themes and archetypal symbols.

What’s the meaning behind the painting Watson and the Shark?

Art historians often point to John Singleton Copley’s religious fervor when analyzing this painting. Notice Watson’s outstretched arms. He seems to surrender to a higher power. His head falls back in defeat. This in many ways parallels the symbol of Jesus on the cross. So, art historians have said this painting represents “resurrection and salvation”*. This could be attributed to Copley’s deep Christian beliefs.

ENJOYED THIS Watson and the Shark ANALYSIS?