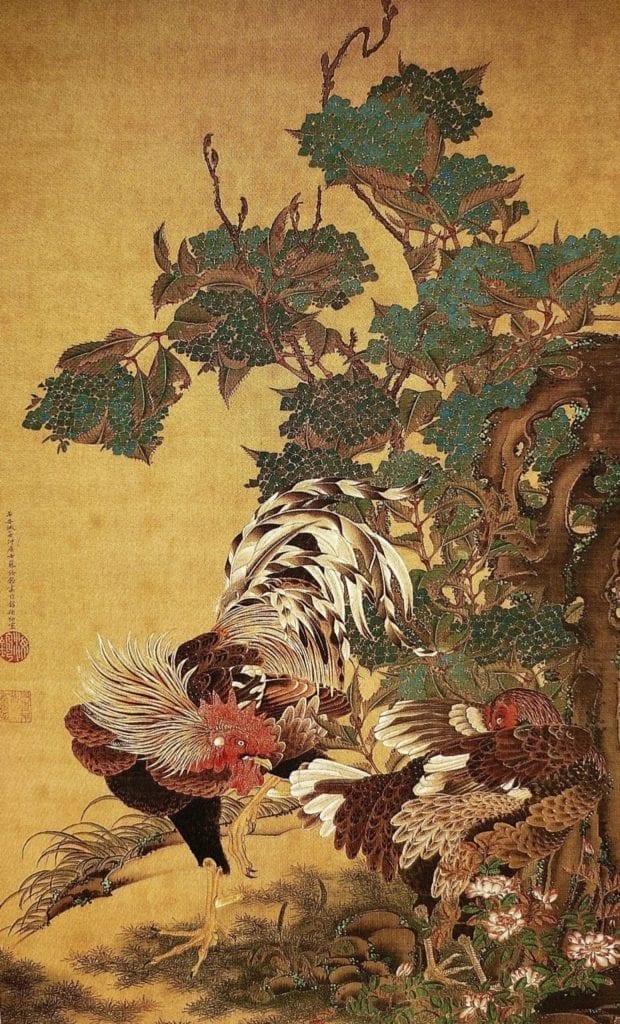 This piece unearths features and insights for the painting Rooster, Hen, and Hydrangeas such as:

Rooster, Hen, and Hydrangeas epitomizes the painstaking care of silk painting. There’s no room for error. Each brushstroke is permanent as soon as it hits the delicate fabric. Imagine the inner peace Ito Jakuchu must have had to achieve this level of detail.

He was an 18th century Buddhist Japanese painter. In fact, this work illustrates his Buddhist principles. They include stillness and respect for animals. Buddhists also value practice and spontaneity. These two opposite themes work together. In fact they’re both crucial aspects of this painting.

Ito Jakuchu’s intricate mastery on silk demands planning. Without practice, it would be impossible. That’s evident in the detailed and florid designs in this painting. Jakuchu captures the birds’ whimsy. Even with their elegant flourishes, they seem real. The Rooster, Hen, and Hydrangeas also have personality. Our gentleman rooster’s poised in a stealthy approach. Yet his expression reads as bored. His eyes seem blank. It makes sense. He’s met many hens like this.

She’s coy and flirting, as lady birds often are. Her eyes shine bright with interest. The hen turns with a twist in a feathery mating dance. Come hither combined with shy caution. The hydrangeas and glimmering gold background highlight the pair’s tango. Their feathers are more glamorous and brilliant thanks to those prim petals. These birds have such enchanting character, they seem like people. This fastidious painting holds such a grip on viewers with its charm. We may forget the meticulous mastery it required. That’s the magic of its whimsy.

Jakuchu painted this masterpiece in the 1700s. Rooster, Hen, and Hydrangeas exemplifies the Japanese Buddhism boon during this time. Japanese isolationism peaked during the Edo Period. Citizens weren’t allowed to leave the country. If they did, they couldn’t return. Speaking of prohibitions, the shogunate leadership shunned Christianity. Expelled, executed, and forbidden, Christians got the message and stayed away. So, Buddhism ruled throughout the Edo Period.*

One of the major Buddhist tenets respects animal life as equal to humanity. The sanctity of sentient beings remains critical in Buddhism. Thus many Buddhists are vegetarian*. So, Jakuchu’s Rooster and Hen feel like full blown characters for good reason. They’re as significant as people to the Buddhist painter. His animal painting grips viewers thanks to this benevolent take on these domestic fowl.*

That richness of spirit shines through Rooster, Hen, and Hydrangeas. Bright red heads and glorious plumage bring these birds to life. Also, the way their bodies swirl creates movement across the canvas. They enliven it as well. Jakuchu balances this painting with climbing green branches behind them. This brings a cool stillness to the setting. Without this bonsai, it would be a more active, flighty portrait. But the serene leaves hover above to cast a chilly shade on this hot flirtation.

Where can I see the painting Rooster, Hen, and Hydrangeas in person?

This Edo period masterpiece graces the Los Angeles County Museum of Art collection. Unfortunately, this piece isn’t currently on display. It’s absent even in their online gallery. But that may change when the LACMA renovation concludes. After all, they hold a magnificent trove of Japanese art. From charming netsukes to exquisite emperor robes, it’s a glory to behold.

What was the painter Ito Jakuchu known for?

His painting Rooster, Hen, and Hydrangeas typifies Jakuchu’s work. He’s known most of all for rooster and chicken portrayals. They’re considered typical subjects for traditional Japanese painting. Jakuchu was not much of a rebel. In fact, he stood apart from the other more eccentric painters of the mid-Edo period. By contrast, Ito Jakuchu earned a reputation for restraint and professional manner. He expressed color on canvas – not with his behavior. As a devout Zen Buddhist, this makes sense.

How much is an Ito Jakuchu painting worth?

A quick online search found a range of prices for Jakuchu works. These ran between tens to hundreds of thousands of dollars. It’s a wide range. In 2018 Christie’s sold the exquisite but simple Rooster and Branch Jakuchu for $100K*. But much of his work is far more ornate and meticulous. It’s a bit ironic for his work to bring such large sums. That’s because when he was working, Ito often took a mere bushel or two of rice for a painting payment*.

Check out these other essays on animal paintings.