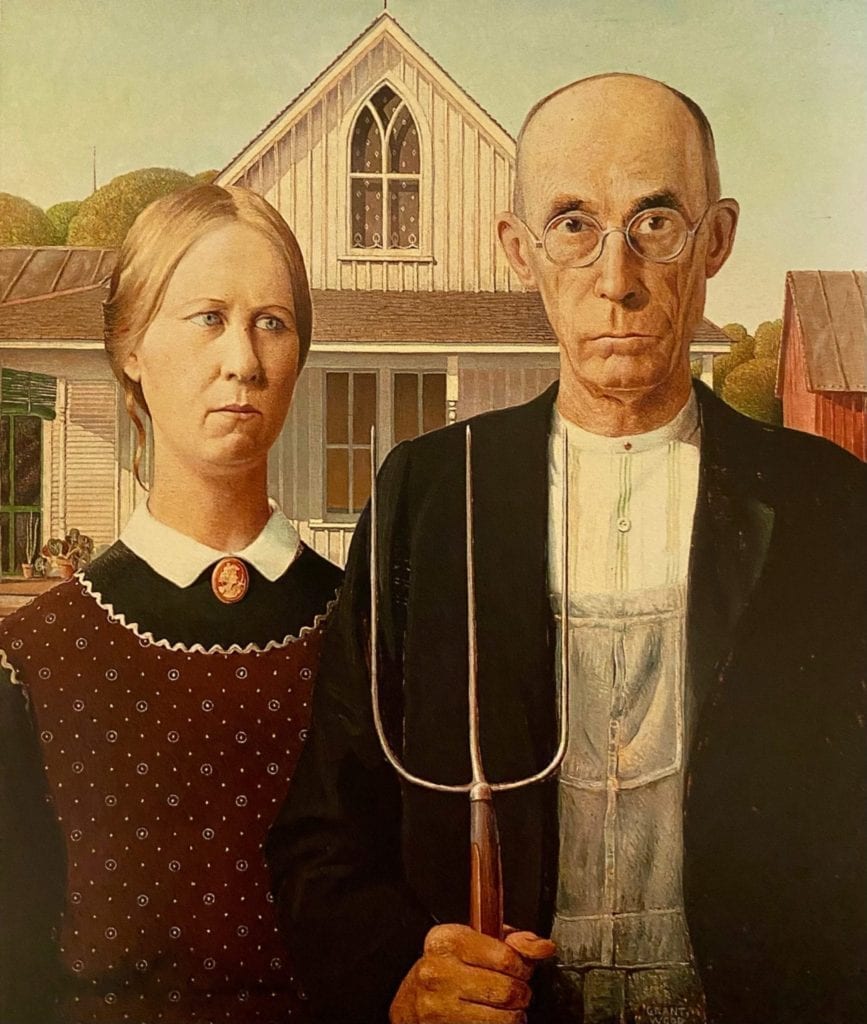 In this art blog post about American Gothic by Grant Wood, I discuss:

American Gothic may be the most recognizable American painting. After all, tee shirts, memes, and mementos galore showcase various versions. But Grant Wood’s simple, esteemed, original’s my favorite. Viewer reactions are the best part of this masterpiece. It’s simple yet iconic. That’s why many seem to project their own lives onto these farm folk of yore. Few fine art fans share the stolid rigidity or spare lifestyle of this duo. Yet viewers often feel they know them. They seem real and not like caricatures.

Grant Wood painted this portrait the way a theater director puts on a show. First he discovered the setting. Wood saw the house, now famous for inspiring American Gothic, in a small Iowa town and knew it had to be in a painting. Then he cast his sister and dentist to play the two roles. Many presume them farmer and daughter. But that’s never been nailed down. In fact, the painter left it ambiguous on purpose. The pair’s grim faces seem more stubborn than sad. These are salt of the earth folks. The kind that take, “You’re a tough old bird,” as a compliment.

Wood painted American Gothic in 1930. So, this Carpenter Gothic house’s style was already quite outdated. The clothes and stature of his subjects also harken to the past. Even at origin this painting represented a bygone time and traditional values. It makes us wonder what type of people choose to live such stoic, old fashioned lives.

My favorite bit in the painting is that ramrod pitchfork, splitting the canvas in two. It reminds me of Paul Klee’s masterpiece Death and Fire. Of course, that’s quite a distinct painting from this. But both paintings have three sharp lines bisecting the canvas. In Klee’s work the thick sticks sit at the top of the work. While here they’re down below. That’s because they indicate the bottom line of the duo’s connection. In both cases, these lines represent birth, life and death. In the case of American Gothic the pitchfork points out the link between these two. They’re family, birth brought them together. They share life together on this farm. Death will signify their separation.

The man in the painting appears quite certain of this. He’s resolute and looks viewers right in the eye. So, we know he means business. This is life, his steady gaze and flatline mouth seem to say. The woman presents the opposite expression. Even though also stern-faced, she looks off into the distance. There’s more to life than this. That gaze tells us. She’s got a freshness of youth too. This shines through her eyes that match the sky. Also a potted plant behind her collar parallels her countenance of hope.

A Pinafore Longs for More

This masterpiece speaks to the American psyche. But it conveys various messages depending on the viewer. The father figure confronts us. His protective glare seems to include everything around him. As the pitchfork stakes his claim in the land beneath his feet, that glare dares us to step forth. It’s his territory. The farm, the house, even the woman. Whether his child, wife, or sister, he guards her like a grizzled knight in overalls. No worries, Gandalf, we shall not pass. This woman lives safe and sound with you in the painting, forever under your guard.

But she wants more. We can see this in her pitiful attempts at decoration. From her ric rac pinafore trim to the cameo brooch – she’s what teens snidely call trying. The pin features a nymph with free flowing tresses. In contrast our lady’s hair’s pulled tight, plain, and close to her head. Its held back – as she is. Bound and boring.

She does have one small escaping tendril behind an ear. It represents a leg out the door or urge to escape. That free little curl’s a start. This is why I see hope in her eyes looking off to the side. She’s not in the moment. The woman has a dream and vision of herself in a better place. It may take the death of the man at her side. But one day in the future she’ll find a new place in the world and let down the rest of her hair.

Where can I see American Gothic by Grant Wood in person?

This masterpiece lives at the Art Institute of Chicago. In fact, American Gothic has always been in this museum. That’s because Wood painted it for a competition at AIC in 1930. Incredibly, it only took third place*. So, the next time you’re bummed about not taking first position, keep this in mind. Nobody’s talking about whatever painting won first place that year. But Grant Wood planted an image in America’s mind that lives on through the ages. Mastery may not always get immediate recognition. Still, it matters most.

A foremost leader of the American Regionalist movement, Wood loved to paint the midwest. A native Iowan, he captured his midwestern home’s America so warmly. It came to be known as The Heartland henceforth. Funny enough, though, it’s the 15th century Flemish artist Jan van Eyck’s influence that sets Wood’s work apart. This is evident in his iconic masterwork American Gothic. In it we can see how using van Eyck’s clarity of technique perfectly captures hardscrabble midwestern characters.

Why is this famous painting by Grant Wood called American Gothic?

The painting takes its name from the architectural style Carpenter’s Gothic. It’s sometimes also called Rural Gothic*. This was the inspiration for the painting. Wood chose the couple to fit the house setting rather than the other way around. The title’s especially appropriate because it refers to Gothic revival building practices. It wouldn’t have been enough to just call it Gothic. Original Gothic architecture blossomed in the European Middle Ages. Anything like it across the pond these days is a mere copy. This farmhouse sets a perfect example of this. It’s how builders in the late 1800s United States honored the grand styles of old Europe’s architecture.

How much is the American Gothic painting worth?

Grant Wood’s paintings sell for millions. Of course, nobody can actually buy American Gothic. It’s not for sale and likely never will be. But if you’d like to come close, art connoisseurs claim his landscapes are the best bet. That’s likely because they tend to sell at higher prices. For instance, a Grant Wood landscape sold for almost $7million in 2005 at Sotheby’s. Owning an authentic Grant Wood presents an exciting opportunity no matter what type of painting it is. That’s because nobody really knows how many are out there. So, hit those Midwestern estate sales, art aficionados.