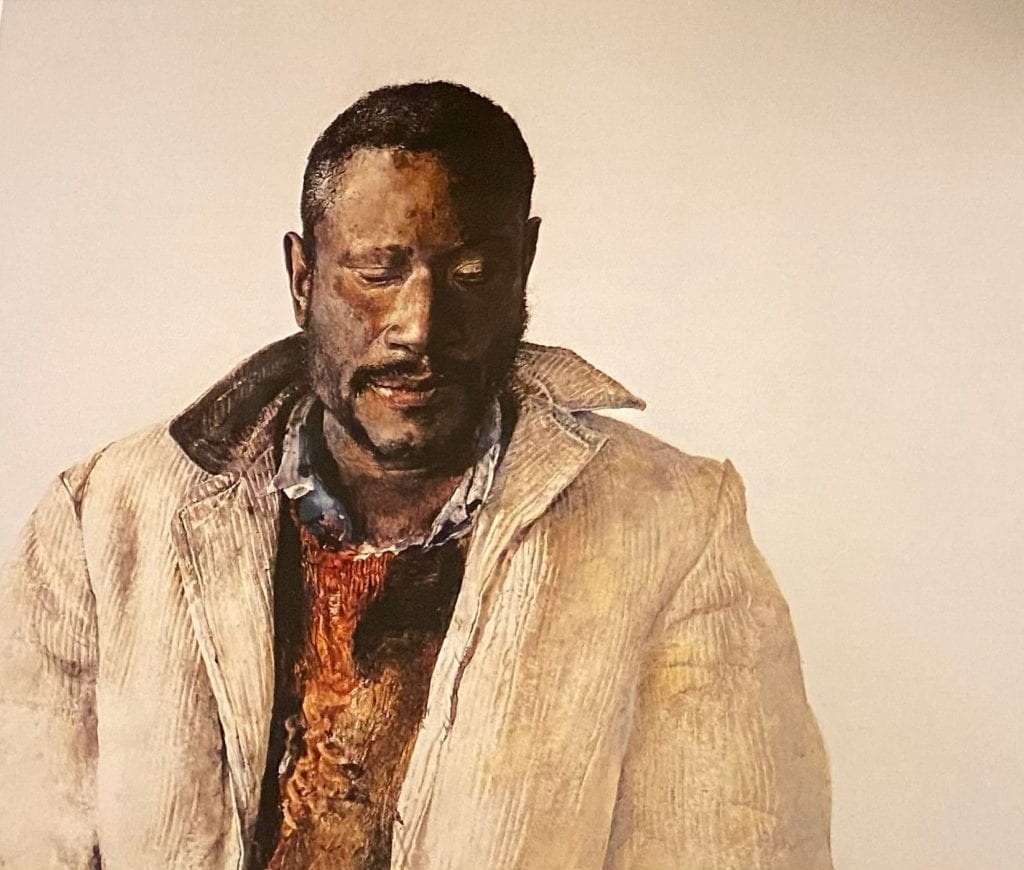 This piece about The Drifter by Andrew Wyeth includes the following topics:

Andrew Wyeth’s The Drifter brings to mind a romantic archetype. A drifter’s that person you can never know. Right when you think you might understand them, they’re gone. Poof. The feelings this brings up make this a romantic painting. That’s why it’s so very unusual. Despite its emotion, this is a remote portrayal. We don’t know much about this man. But Wyeth gives us clarion details to point out every bit of information. He’s sad. His clothes are grubby. He looks away.

These features point to loneliness and isolation. They also make us wonder. Viewers want to know more about him. When I first saw this painting I felt like I was waiting for The Drifter to lift his head and look at me. That’s how much I wanted it to happen. I wanted to meet his gaze and know him a little better. There’s a sense of longing built into this portrait. It tells us that Wyeth chose this man because he had a similar sense. That there was more to this drifter than what we see on the surface.

Wyeth often painted his subjects looking away. So, this painting’s not exceptional on that point. It stands apart because there’s resonance beyond the averted gaze. In fact, most of the other Wyeth subjects are looking in another direction to see something else. The Drifter’s sole purpose seems to be looking away. He’s not looking at anything other than a floor. His lowered eyes could be shameful. Or Wyeth may have asked The Drifter to look away and this was his interpretation. It appears natural, though. That’s partly due to his slouched stature and unkempt clothes.

He has the appearance of a man who’s passing through town. That’s the appeal of The Drifter archetype. Many find unattainable people attractive. It’s a challenge to connect with them. Right when it’s about to happen, they slip away and stay mysterious. That’s where the tension plays a romantic role. Drifters drift away – this creates longing. For those who believe that Romeo and Juliet fiction about true love as tragedy, this works like a magnet. They want what they can’t have. So, The Drifter represents that fantasy to many. To others, like me, he represents real sadness. It’s still longing. But quite a different brand – the kind that wants real connection.

Andrew Wyeth remains a controversial but beloved realist American painter. His work still lives in the world of contradiction. Many art historians say he’s overrated and others underrated. Robert Rosenblum listed Wyeth as both most over and underrated artist of the 20th century. That’s how complex his stature stays within the art world. There’s a simplicity to Wyeth’s work that stands alone. He also got obsessed with a subject and painted them over and over. It was his way of probing their psychology with subtle differences between paintings.

That’s one reason The Drifter stands out among Wyeth’s collection. There’s unparalleled spareness at work here. Hard to believe but this is a watercolor. Considering the depth of these colors and refined brushwork, it’s a wonder. There’s clarity and richness to this painting that resonates like an oil or acrylic. It’s also quite emotional even though the subject seems disengaged. That’s a different kind of surprise for viewers.

It’s not the only one either. Turns out, Andrew Wyeth knew this man as his farmer neighbor, Willard Snowden. He painted neighbors a lot. Art historians point to this portrait as an example of one who resented the practice. For proof, they cite his facial expression and the repackaging of a farmer Wyeth knew as The Drifter*. It creates an archetypal character for this painting that otherwise wouldn’t exist. If Wyeth had given the painting a title like The Farmer or Willard Snowden, it would be a wholly different painting. Still, this information about Wyeth’s connection to the subject doesn’t shed as much light as it may seem.

No matter its history, the deeper we look into The Drifter the less we understand the subject. His melancholy mood overpowers that handsome face and rugged clothing. Viewers feel for this man. But he remains remote no matter how much we look or want to know him. He’s a mournful mystery wrapped in a masterpiece.

Where can I see Andrew Wyeth’s The Drifter in person?

This fascinating painting sits in the Seattle Art Museum. They have a glorious retrospective of Wyeth works where it’s included. The Drifter stands out among them with its high contrast coloring and powerful emotional resonance. Luckily, you can check it out in this context online thanks to Artsy.net. According to Artsy, The Drifter‘s on loan and belongs to a private collector.

What’s the painter Andrew Wyeth most known for?

I find it amusing that Andrew Wyeth causes controversy in the art world. That’s because his art fits into the classic regional style. Regionalism is specific to American modern art. It depicts small town American life with realism. These paintings captured the American heartland after the Great Depression. It’s a conservative and traditional perspective on a rural lifestyle. So, what’s controversial about Wyeth? Art historians debate his place in the artistic canon. Some say he was just a popular illustrator. Others that his paintings unpacked profound insights. I’m in the latter camp and love to lose myself in Wyeth’s paintings.

What are examples of The Drifter archetype? How can I recognize it?

The Drifter fits a familiar archetype through the ages. From grifters and nomads to traveling salesman – it’s a character we all know. There are several aspects to this character, including isolation. But that’s a consequence of aimless roving. Vagabond lifestyles are the primary feature for drifters. That’s why The Drifter tarot card would be The Fool rather than The Hermit. The Fool wanders fancy free through life’s adventure. That’s the card’s main message. Hermits are lone wolves – like The Drifter. But they often stay in one place. A drifter’s gotta drift. That’s job one for them.

How much is an Andrew Wyeth painting worth?

Andrew Wyeth paintings consistently increase in value. Notice that even the harshest critics of Wyeth say that he is “merely popular”. That means cash money no matter how much artistic merit may or may not dwell behind it. Wyeth painting sales break art house records. For instance in 2009, Christies sold his tempera painting The Narrows for $6.9 million*. At that time this was the second highest sales price for a Wyeth painting.

ENJOYED THIS The Drifter ANALYSIS?