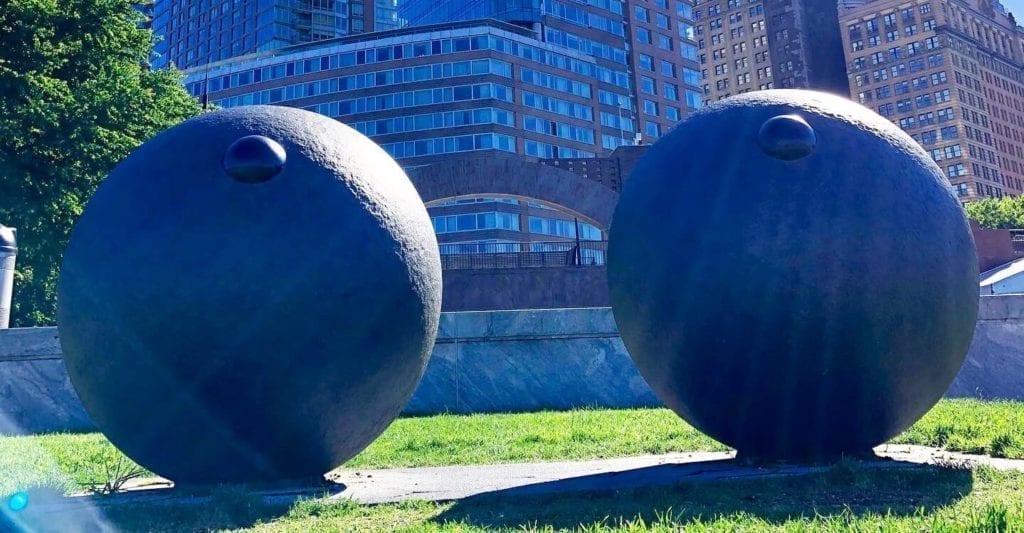 A complex woman with a vision, Louise Bourgeois turned anxiety into art. Her work provoked audiences. She channeled emotions into her pieces to jolt us awake. Good or bad, Bourgeois makes us feel things. That’s the gift of her sculptures, installations, paintings, and drawings. Aggressive artwork gives us meaty ideas to digest. That’s the nourishment of it. Louise Bourgeois fed the art world like a mother.

Why is Louise Bourgeois important?

Born in 1911, she was raised in France and became an American citizen in 1955. Her work spans the globe in a variety of formats. In fact, her installation cells combined disparate elements with aplomb. As a mother of three, Bourgeois struggled to carve out a spot for herself in the patriarchal art world. She did it with startling and ambivalent scenes that struck new ground. Her Spider Cell, below illustrates a perfect example.

Louise Bourgeois also invented gendered metaphors. She set viewers off balance with charged sexual symbols like genitals and breasts. This was before mainstream feminism. Very few people were even talking about gender. Bourgeois disrupted art world conversations. Beauty and symmetry are gorgeous. But there’s more to life… It’s not always binary and balanced. Emotions erupt from the discomfort of this reality she forces on her audience. This was groundbreaking. It makes art history and her a SheRo because she’s a hero.

This installation graces the Museum of Modern Art in NYC. Louise Bourgeois integrates facets of her story with disturbing archetypal imagery and grace. For instance, her parents ran a tapestry gallery in France. So, Bourgeois grew up surrounded with fabric artistry. She then continued to see art in everything. Her installations include marble or bronze sculptures. But they’re juxtaposed with items like empty bottles, or cast-off clothing.

Bourgeois cells create worlds unto themselves. Archetypes creep into your unconscious with resonant images like Spider. These magical creepers represent creativity among animals. They spin enticing webs with artistry. Their delicate traps tease and capture oblivious prey. Then spiders tangle their infinite legs around these creatures to hug them farewell. Spiders thus represent sneaky killers in the deep recesses of our unconscious. Bourgeois taps into this with her installation.

Spider (Cell) lurks over a cage with frightening power. She’s a terror. The ragged stealth of steel legs strike a piercing chord. Still, the piece brings up mothering imagery. She’s protective of her scary cage. Sure, it’s off-putting. But that’s the point. Viewers understand that we can’t impose on her territory. Spider’s got delicate fabric swatches in there. It makes sense, this spider mother concept.

They share many qualities. Both have eyes in the back of their heads. Spiders produce hundreds of eggs. They weave and tease with legs working many different jobs at once. This particular spider mother’s an overprotective sort. She cages her child like prey. It terrifies and teaches at the same time.

The Eyes by Louise Bourgeois

I run past Louise Bourgeois’s sculpture The Eyes every morning. In fact, The picture above I took on a recent rainy jog. The way raindrops rolled off the eyeballs like tears touched me. But it’s usually more of a mockery than a moving piece. The sculpture pokes out from Wagner Park near Pier A in southern Manhattan. These eyes gaze upon Lady Liberty, smiling from across the Hudson. Best part is that this art piece makes us smile back. It’s fun and fantastic art all at once.

Sometimes artists bless us with a wink. That’s what Louise Bourgeois gives us with The Eyes. These bounteous orbs deliver much more than cute peepers. Children point at them and squeal, “Boobies!” but who can blame them? It’s clear that the artist meant to create this dichotomy. Bourgeois has a long history with suggestive sexual shapes. She created Fillette/Young Girl in 1968. This shocked and amazed audiences with a distressed phallic image. Then Bourgeois mined deep Daddy issues with a sea of latex breasts in The Destruction of the Father in 1974.

Still, The Eyes is the best of the sexual innuendo bunch. It’s silly and uplifting. The irises jut out like jolly nipples pointed to the sky. Louise Bourgeois enhanced conversations about art across the world. She made us uncomfortable. Other times her work evoked volatile emotions. Bourgeois inspired artists, curators, and critics. But her most important work is right here and right now. It’s 2020 and while the world shifts with seismic and scary changes, she makes us laugh.