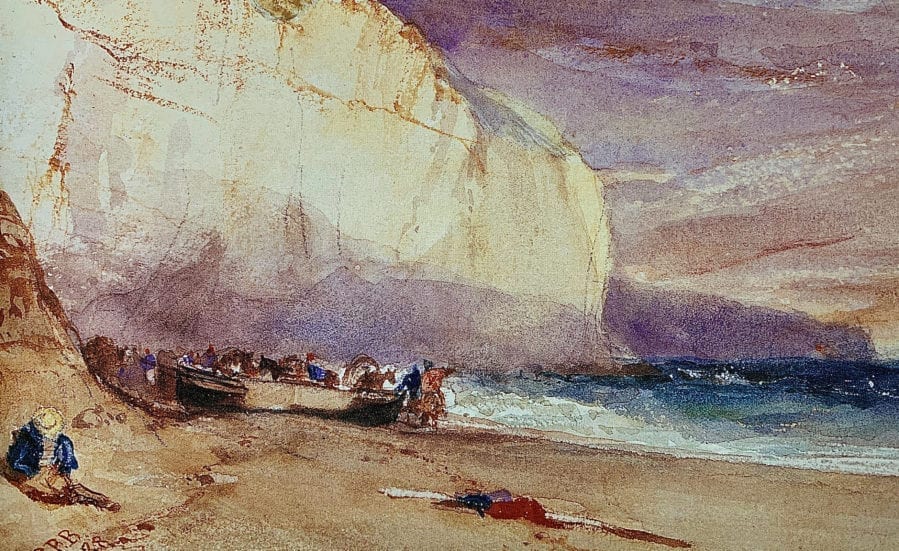 Foreboding waves crash The Undercliff painting. This makes literal and figurative sense. After all, Richard Parkes Bonington painted it one month before dying. He was twenty five years old with TB. It was 1828 and tuberculosis was known as the “robber of youth” at the time. That’s because TB fatalities were especially high among young people. In fact, Bonington and John Keats, the poet, were two particularly talented victims of it that year.

The painting’s front spotlights a dejected figure at the left. But this isn’t the only portrait of doom in the piece. A haunting cliff looms above. Dark waves bear down on the shore. Tides push and pull upon the bluff – like the unrelenting rhythm of life and death. In the painting’s middle sailors struggle with boats on the sandy shore. They represent everyday tangible toil. Work’s got certainty. It lies between lofty cliffs above and the despondent foreground figure.

Cliffs are a familiar symbol. When you see one from below, as we do in The Undercliff, it feels far away. Here it symbolizes a remote mystery. This cliff stands as a distant spiritual beacon. But what does it call us to do? Bonington knew he would soon die as he painted it. It’s a mortality reminder.

That may be why Richard painted this in watercolor on paper. These materials reflect life’s temporary and fragile nature. They’re delicate – just as his grip on life was at the time. In fact, painting with watercolor takes a light touch with the brush. Each stroke requires great care or it’s easy to ruin the painting’s tenor.

The Undercliff presents a precipice from underneath. But cliffs symbolize doom no matter how you look at them. Cliffs are a spiritual symbol precisely because they present sky high stakes. Richard Parkes Bonington’s bluff hovers above the scene with icy white beauty. It’s imposing on the viewer while also enticing the eye. You can’t help but look back to the cliff again and again.

The sad figure upfront also grabs attention. Sure, he’s a bit of a faceless downer. But he begs the critical question – why? He’s leaning in such a dejected way. There’s a story to this man. This may be Richard Parkes Bonington bowing his head to death. After all, he can’t live everyday life as he once did. The distraction of his imminent death prevents it.

In fact, elements of the everyday surround our pathetic figure. Sailors lugging boats into the sand represent the tangible life he’s leaving behind. The cliff symbolizes the opposite. It’s a spiritual interference of death looming over mankind. This conveys the profound message of The Undercliff. Mortality awaits us all.

Where can I see The Undercliff in person?

Nottingham Castle Galleries and Museum in the U.K houses The Undercliff. Unfortunately, as of 2020, it’s under construction. But as soon as it reopens, I’m booking my trip to revisit this historical site. It’s packed with rich stories and a keen art collection.

Richard moved to France from his native England at fourteen years old. He brought bits of British style to French painting. So, he was certainly a British citizen. But many consider him as much a French painter as a British one. He even attended the École des Beaux-Arts. Also his first exhibition showed at the Paris Salon.

In what style did Richard Parkes Bonington paint The Undercliff?

Bonington’s known for his romantic landscape watercolors. Of course, they’re from the time of high romance. Just as John Keats poems will always be primo romantic. Art plus dying young equals romantic – it’s the formula that never fails.

What’s written on the back of The Undercliff painting?

The painter’s mother wrote on The Undercliff‘s backside:

August 6th and 7th 1828. The last drawing made by our dear son about prior to his fatal dissolution. Never to be parted with, E. Bonington.

Enjoyed this The Undercliff analysis?