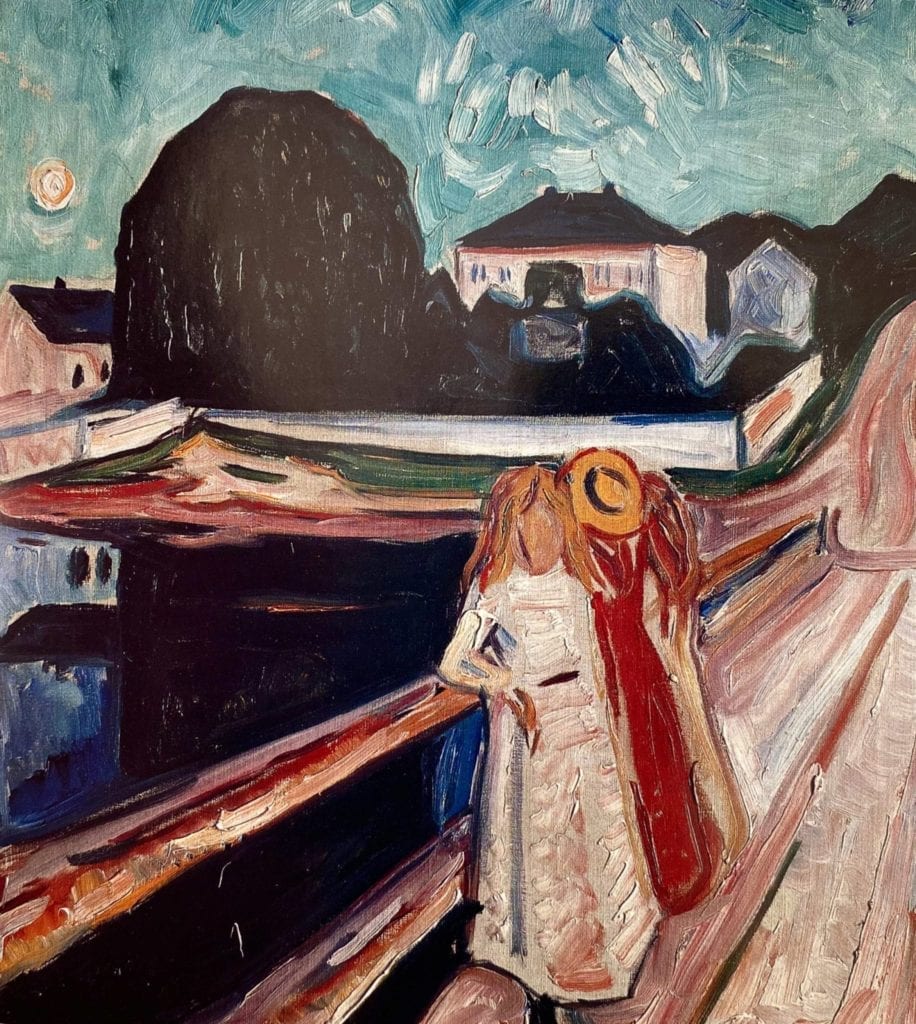 Learn about the symbolic expressions in Girls on a Pier including:

Why is Girls on a Pier my favorite Edvard Munch painting? It’s that wistful pink bridge and how it blends into the road to nowhere. Many choose The Scream for its iconic emotional power and pull. I respect that. But I’m drawn more to the subtlety of this piece. The resonant dread of Munch still permeates this painting. But there’s a delicacy and poignance as well. At its core, this piece portrays the significance of time and longing in human life.


Three Girls on a Pier stand so close together, they appear to be one. The farthest away seems like only a sliver of pink cloth and pinkish hair. She blends into the pier a bit. Viewers can’t see her face or figure. The girl’s lost to us, like the past. Next to her, the middle girl also has her back to us. We see a bit more about her because she wears a hat and bright red frock. She’s fancy and dressed up – as if going somewhere. This girl represents the future.

Both the hatted and pink sliver girl look out over the water. They keep us at a distance; facing away and focusing elsewhere. It’s the town across the bay that calls to them – adulthood. These two girls can’t wait to be women. They long for it. But the girl in a white dress has a different outlook. She looks at us. But we still don’t see her face. Munch obscured her features to match the sky’s moon. Viewers can’t know her any more than we can know the night’s most mysterious orb.

This keeps her innocent. She lives in the present and represents youth. I love the way this girl leans and tilts her head the slightest bit. It reminds me of a puppy seeking a treat. Of course, it’s quite subtle. But this sweet moment feels like a miracle here. That’s because it’s a Munch painting. He balances his brooding dread with this young lady. Viewers don’t see her face. But we know her hope.

Munch creates a sense of balance in every part of Girls on a Pier. From the colors and composition to his emotions, themes, and even symbols, he gives us symmetry. It starts with color. That marvelous pink imbues Munch’s moon, houses, and coastline. This balances the pink pier. It also makes meaningful sense. Pink signifies feminine youth here. The moon represents a new world and those houses offer the girls fresh opportunities.

Munch also parallels darkness with deep water and black masses of trees. These convey doom. That gaping abyss of a tree between the pink houses waits like a black hole of the unknown. Also it’s enormous enough to dwarf the largest building in town. This represents the key element of Girls on a Pier – uncertainty. It’s what the houses and trees have in common. Both show a future for the girls. They’re transfixed; gazing at it.


The girl farthest away seems already gone. She’s a mere suggestion of a girl. While the middle girl’s fancy-dressed and ready to face her future. They can’t wait for adulthood. But Munch counterbalances this theme. He gives us a virtuous third girl of-the-moment. She even looks in the opposite direction – toward us. The theme of longing (symbolized in the girls looking to the future) meets its match in her. She represents the fleeting and faceless mystery of youth. This girl may be curious, with her head a bit cocked. But she’s also content where she is.


Munch balances the emotional tenor of the painting too. Trees and dark waters evoke a sinister threat. While the pink houses point to exciting opportunities. We also see hope spring from the faceless girl in white. This, along with the rosy pier, counters the painting’s gloomy feeling. So, it’s a cohesive scene. Munch pulls it together with a thoughtful harmony of emotion and color. Yes, it still resonates a profound sadness. That’s what you get with a Munch masterpiece.

Girls on a Pier – FAQs

Hold on. Isn’t there a Girls on the Bridge painting by Edvard Munch? And I saw this as Girls on a Jetty too! 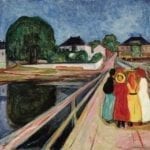 Nice catch! Yes, Munch painted seven versions of this same scene. There are several names attributed to them. These include Three Girls on a Bridge and The Girls on a Jetty. I’ve even seen it called The Women on the Bridge. But that’s not an accurate title. These are young girls.

So, how did I choose the title for my post? In fact, I first titled it Girls on a Jetty. That’s because I first fell in love with the painting under this title in the book, Sister Wendy’s American Collection. Then I saw the painting in person at the Kimbell Museum with the title Girls on a Pier. That’s the official site for the masterpiece. So, it’s the title I chose.

Some of the paintings have more than three girls. In a few there are the same three girls but in different positions. One is almost exactly like the Kimbell Museum version. But the difference is Munch put a pseudo face on the girl facing viewers. That’s one of the things I love most about the Kimbell version – the blank face. The way it matches the moon thrills me. This one’s also got the pinkest pier.

Why did Edvard Munch paint the Girls on a Pier? 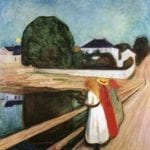 A getaway to Åsgårdstrand in Norway planted seeds of this painting. It was 1893 and Munch was hanging at the resort among artists and writers. He created a draft that would evolve into a first painting in 1901. That version (on the right) shows the three girls all turned away from the viewer.

Munch obsessed over resonant feelings and expressing them in his work. He also evolved his work in a unique way. Girls on a Pier illustrates this well. In this first version the scene feels tidy. There’s also a neutrality in coloring. Only the red dress pops. The bridge lies flat in boring beige. His brushstrokes are clean and ordered.

But Munch used delightful pinks and unbridled brushwork in his 1903 version. That’s what makes it expressive. This was Munch’s goal. He wanted to convey emotion through painting. Edvard Munch was a Norwegian painter. So, it’s fitting that his bridge girls origin painting lives in Oslo, Norway at their National Gallery Museum.

What kind of painting is Girls on a Pier?

Edvard Munch was extra. This crossed over from his personal life into his painting. He exaggerated lines and colors to imbue feelings in his work. That’s part of what made his paintings special and memorable. Some Munch paintings shriek and moan in our memory banks years after we leave the museum. This historical impact showcases the power of Expressive painting.

Munch’s work fits into the Expressive category well. That’s because he distorts reality with his style to convey feelings. This fits the Expressionism definition perfectly. In fact, Munch was one of the first to paint with this in mind. He helped make it happen. Expressionism also works as a subset of Romantic art. It’s less formal, though. There’s not a singular style to Expressive art, though. What matters is distorted vision and emotional resonance. The distortions comes in all types: color, shapes, brushstrokes, and more. Munch used these in Girls on a Pier. That’s what makes it a masterpiece.

Enjoyed this Girls on a Pier analysis?

Check out these other essays on Unique Masterpieces.

Expressionism definition thanks to the Tate