Table of Contents for Ada and Alex by Alex Katz includes:

Simplicity takes balls. For instance, the level of confidence required to create Ada and Alex. This double self portrait shows painting minimalism at its post 70s peak. It was 1980. Women wore shoulder padded power suits and scrunchies. Still, artists like Alex Katz prove that restraint flourished too. In fact, his career took off thanks to paintings such as this one. Like many minimalists, Katz threw a lot away. He destroyed at least a thousand paintings in search of his unique style.

I find joy in the distinctive Katz manner. He gives us the absolute minimum in line, form and color. It’s not enough to call his paintings simple – reductive works better. Katz reduces his subject down to fundamental elements. He gives us only enough for recognition. Viewers know who this is with the fewest possible brushstrokes. The way he pushes this piece down to its foundation creates an almost abstract quality. It’s incredible how the couple seem both real and ideal all at once.


That combination heightens the meaning for Ada and Alex. It’s not a mere portrait of two people. There’s also a marriage here. Much like how this piece presents a world of both realism and idealism – so do partnerships. When we enter relationships there’s an ideal in our head. It’s how we think it should be. But our actual interactions are the more profound part of human connection. They rarely match the ideal in our head. Katz reminds me of this with the painting Ada and Alex. His composition of the pairing puts Ada in front. She’s even shielding part of him. Her figure eclipses his. With this choice, Katz shows us Ada’s importance.

The eighties were a cutthroat American era. That was especially true in cities like New York – where Alex Katz painted. Competition culture was the norm, even in the art world. Lucky for Katz, his drive and talent gave him an advantage. Abstract Expressionism peaked after WWII. Jackson Pollock and Willem de Kooning ruled the roost. But it also opened the door for new styles. Pop Art and cool cats like Katz served as reactions to Abstract Expressions. How do we know this? There are two ways to unpack it. Let’s hear how an art world thinker framed the style first.

Abstract Expressionists value the organism over the static whole, becoming over being, expression over perfection, vitality over finish, fluctuation over repose, feeling over formulation, the unknown over the known, the veiled over the clear, the individual over society and the inner over the outer.

Looking at Ada and Alex, viewers get the opposite. Katz polishes his portraits. They’re clear formulations of perfection. When he started out, Katz made portraits from cutouts. This flat planed quality resonates through his later work as well. He creates a static whole image. It sits still, an obedient subject. In return, Katz creates idealized portrayals for them. His portraits make icons of real people. That parallels Pop Art a bit. But Katz wasn’t a true Pop artist. He didn’t tell us cultural stories or even point to society. This American painter also eschewed narrative.

But don’t just take my interpretation and word for it. Katz spoke of his competitive outlook with refreshing directness. His words ring clear and confident as a Katz painting on this topic.

We compete for audiences, as artists. I’m competing with the Abstract Expressionist guys. I’ll knock ’em off the wall.

Katz injects this gusto into the artwork. It’s my favorite thing about him. That bold look also sets him apart. His portraits are so recognizable. But they’re never boring and aren’t duplicates. They respect each individual. Because Katz has a distinctive vision, his viewers can spot his work with ease. He’s also popular. Ada and Alex exhibited at the Marlborough Gallery in Chelsea, NYC. They showed his work for thirty years. In fact, Katz has done more than 250 solo shows and almost 500 group exhibitions. At the moment his paintings hang in more than 100 institutions across the globe.

Sometimes intangibles are what make artwork a masterpiece. But it’s not hard to say why with Ada and Alex. Katz makes portraiture look simple and easy when it’s the absolute opposite. Of course there are critics who disagree and even call him “the ultimate in WASP art”. That may be true. Still, his paintings feel like popping open a new can of tennis balls, WASPy …and fresh too.

What kind of painter is Alex Katz? 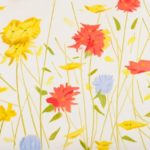 It’s a challenge to categorize Katz. One’s best served by sticking to “figurative painter” and “contemporary artist” when asked. That’s because his work defies classification. He was most popular during the Pop Art movement. But his paintings never quite fit the definition well enough.

It’s the same case with New Realism. This group appropriated reality in their paintings. New Realists seem to recycle what they see, rather than paint simple and direct portrayals. Of course, there’s an element of this to Katz. He serves up his own version of reality. But his work’s also simple and direct. Much of New Realism involves assembling collage-like images. Katz delivers faces to us straight up. Ada and Alex illustrates a perfect example of this.

As of this writing, Katz paints more than ever at 93 years old. So, above all, he’s resilient. Katz evolved as an artist since his first solo show in 1954. But he didn’t change with the times. His vision stayed bright and crisp thanks to its originality. Katz was never much of a joiner. He forged his own path.

Who is Ada in the painting Ada and Alex?

Ada Katz may be best known for her presence in more than a thousand Alex Katz paintings. But she was much more than just a wife to painter Alex Katz. A Fullbright scholar, Ada worked as a biologist for Memorial Sloan-Kettering Cancer Center. She was one of the only women who worked in the lab at the time.

In 1958 she married Alex and they’re still together more than sixty years later. Though Ada left Sloan-Kettering to care for their child in 1960, she kept making a difference. Not only did she manage Alex’s studio, she also started a non-profit theater company. Her creation, Eye and Ear Theater invigorated Off-Broadway shows for more than a decade. They specialized in plays by poets with painter and sculptor-crafted costumes.

How much is an Alex Katz painting worth?

Art has made Alex Katz very rich. His estimated net worth sits around $57 million. But his paintings are much more accessible than his tax bracket. Most of his works on Artsy.net are in the under $20K range. That’s because they’re prints. His actual paintings run around $75-100K at the lowest. The highest price paid thus far for an Alex Katz was $4.1 million in 2019. Sold at London’s Phillips Auction house, this painting, Blue Umbrella I, harkens back to another time. Katz painted it in 1972.

Enjoyed this Ada and Alex analysis?

Cathleen McGuigan (August 2009), Alex Katz Is Cooler Than Ever – at the Wayback Machine – Smithsonian Magazine

Katz narrative bio on his site