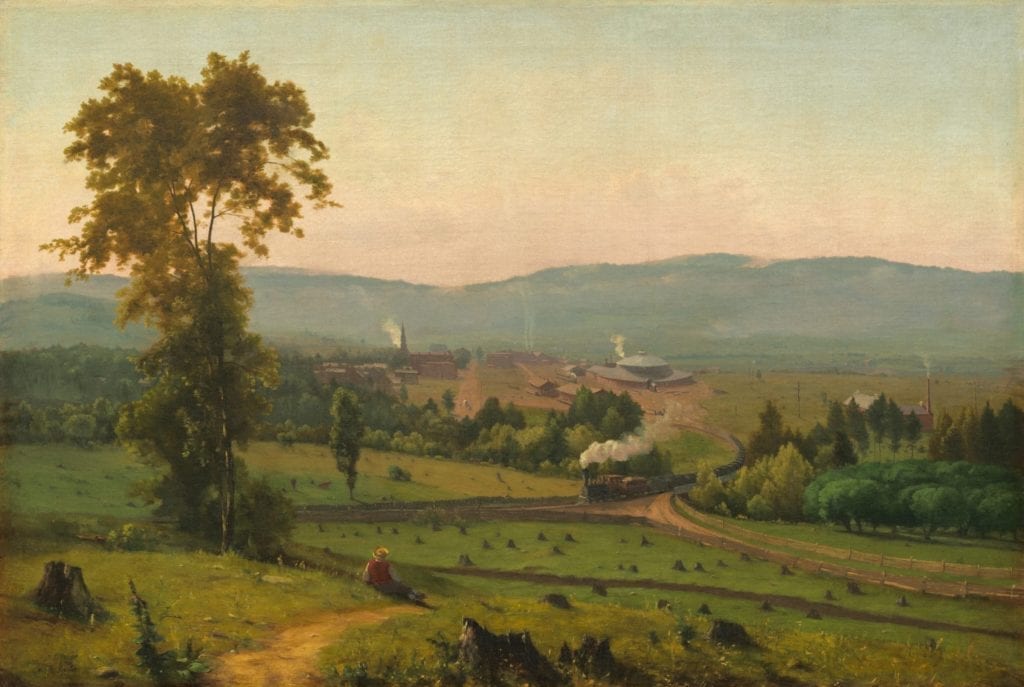 This blog investigates several aspects of The Lackawanna Valley painting such as:

The Lackawanna Valley presents a fabulous example of compromise in action. Delaware’s Railroad commissioned this landscape in 1856. They wished to highlight the wonders of modern tech. Rail travel was still a new fangled way to get around in those days. The railroad company wanted to broadcast its wonders with fine art. George Inness was an ideal choice for this job. Art Historians often call him the father of American landscape painting. Who could better illustrate machine marvels in a lush valley setting?


That’s what makes The Lackawanna Valley such a stunner. It wasn’t his first version of the project, though. George Inness painted the glorious valley in his initial take. Its railroad took a subtle secondary role. The President of Delaware’s Railroad company rejected this. He said Inness didn’t respect the brief. The whole point was to glorify the four rail engines and tracks running through the valley. Inness headed back to his art studio for another try. So, this painting illustrates the impact of second chances.


Limitations and compromises like this are typical for artists. They often have to balance their vision with pleasing clients. It may be more challenging for a master to be humble, though. Lucky for us, George Inness was up to the task. His second draft of the commission roars with mighty trains. Rich greenery and misty mountains serve the locomotives as if they’re natural partners. The innovation of modern transport looks right at home in The Lackawanna Valley.

The Landscape Past, Present & Future

The Lackawanna Valley balances opposites. American painter Inness does this with parallel aspects of nature and tech. For instance, mist gathers around the mountains. It also bursts from the railroad and chimneys. This matching of elements creates harmony in viewer minds. They also tell a story. Smoky mountain valleys go back centuries. Viewers know their foggy bottoms well. Trains were the latest tech at the time of this painting, 1856. But their steam engines were common knowledge. So, this composition creates a perfect union.

Another example of this symmetry works through shapes in the landscape. Trees pierce the sky a lot like the chimney and spire. They share that knife shape – pointing into clouds. A patch of mini-forest on our right side of the painting sits in a clean circle. This partners with a circular building deeper into the valley. In fact, both spheres have a gust of steam beside them on the left. The train rolls past a brilliant green ball of trees. While the circular building wears a billowing smokestack – like a feather in its cap. These intertwining elements help us understand the painting.

Inness also perches a red-vested person in our position. They lean in a relaxed posture; looking into the valley below – as we do. This creates two dimensions. It mirrors us. But it also models our painter’s process. Because of its initial rejection, he had to deliberate and plan the portrayal more. Like the person lounging on the grass, Inness took a longer look. This thoughtfulness paid off. As a result, The Lackawanna Valley presents a unified moment. The train enhances the valley. It also foretells America’s unification. After all, trains brought people together across the country.

It takes a true masterpiece to do all this with a landscape. There’s mastery even in those stumps. They dot the foreground around our friend in the vest. This symbolizes the way humans alter nature to match our needs. For instance, we clear paths for railroad tracks, roads, and homes. Sometimes even chopping down glorious trees to raise roofs. It’s one way people manipulate raw nature with human nature. The Lackawanna Valley brings us back to the time when America was new at this.

We witness a peaceful intersection between past, present and future. George Inness represents the past with a lush, tall tree on the painting’s front left. It took a long time for this tree to grow into the landscape’s present moment. The painting also carries us into America’s future as a train roars through the valley and into the next town.

Why is The Lackawanna Valley an important painting?

George Inness showed a new side to his work with The Lackawanna Valley. Before this he was known for his Barbizon style. That’s because he frequented Paris and bonded with artists at the Barbizon school. These trips were so influential that Inness became known for his Americanized version of a Barbizon landscape. This was in the early 1850s. So, soon after this period he got the commission for the Delaware Railroad.

In fact, The Lackawanna Valley marked a departure from the Barbizon style. It’s still in that schema, with loose brushwork and resonant mood. But Inness created his own version here. Most Barbizon works use a dark palette. In contrast, sunshine and pale colors lend this painting a mystical quality. It was special and put George Inness on the map.

What is the painter George Inness known for?

That mystical trait Inness brought to The Lackawanna Valley became his trademark. During his early career he traveled to Europe. While studying the works of master French Baroque landscape painters. Soon after he embraced the Barbizon School style. But Inness didn’t only learn painting in Europe. He also took to Swedenborgian, a sub-sect of christianity that worships Jesus as God.

Inness paintings then shifted as his belief in Swedenborgian grew. His work took on a more mystical quality. He imbued the Swedenborgian concept of spiritual nature into his paintings. It’s the idea of a correlation between God and nature. In other words, nature serves as a direct expression of God. An experience of nature can thus be spiritual.

This comes through in his work. It distinguishes Inness landscapes from those of his peers. Other painters used his panoramic and stylistic techniques. But he remained unmatched in his mystical take on nature.

Where can I see The Lackawanna Valley in person?

It’s fun to visit George Inness’s painting The Lackawanna Valley. That’s because it lives at The National Gallery of Art in Washington, D.C. This museum houses more than 150,000 works. It spans paintings, drawings, and sculpture to represent peaks in Western Art. Best part is – this area of Washington, D.C. feels like a museum mecca. It’s walking distance from Smithsonians, the Holocaust Museum, and kid favorite, Air and Space, to name only a few. These are some of the coolest museums in the worlds. Most are also completely free.

What is the Barbizon School of painting?

Barbizon refers to a French region near the Forest of Fountainbleau. This was a movement toward realism that arose out of popular romanticism. Barbizon began in the 1830s among artists gathering in that region of France. It was only a group of artists and never became an actual school. Still, it’s called the Barbizon School to this day.

The Barbizon group focused on landscapes. They were noted for a loose brushstroke style with soft forms and a dark color palette. Théodore Rousseau, Charles-François Daubigny, and Jules Dupré were popular Barbizon painters. This movement influenced landscapes in Europe and America. In fact, many painters in the Hudson River School emulated the Barbizon style in their landscapes.

Enjoyed this The Lackawanna Valley analysis?

Check out these other essays on landscapes.

At the National Gallery of Art in Washington, D.C.

The Met on George Inness