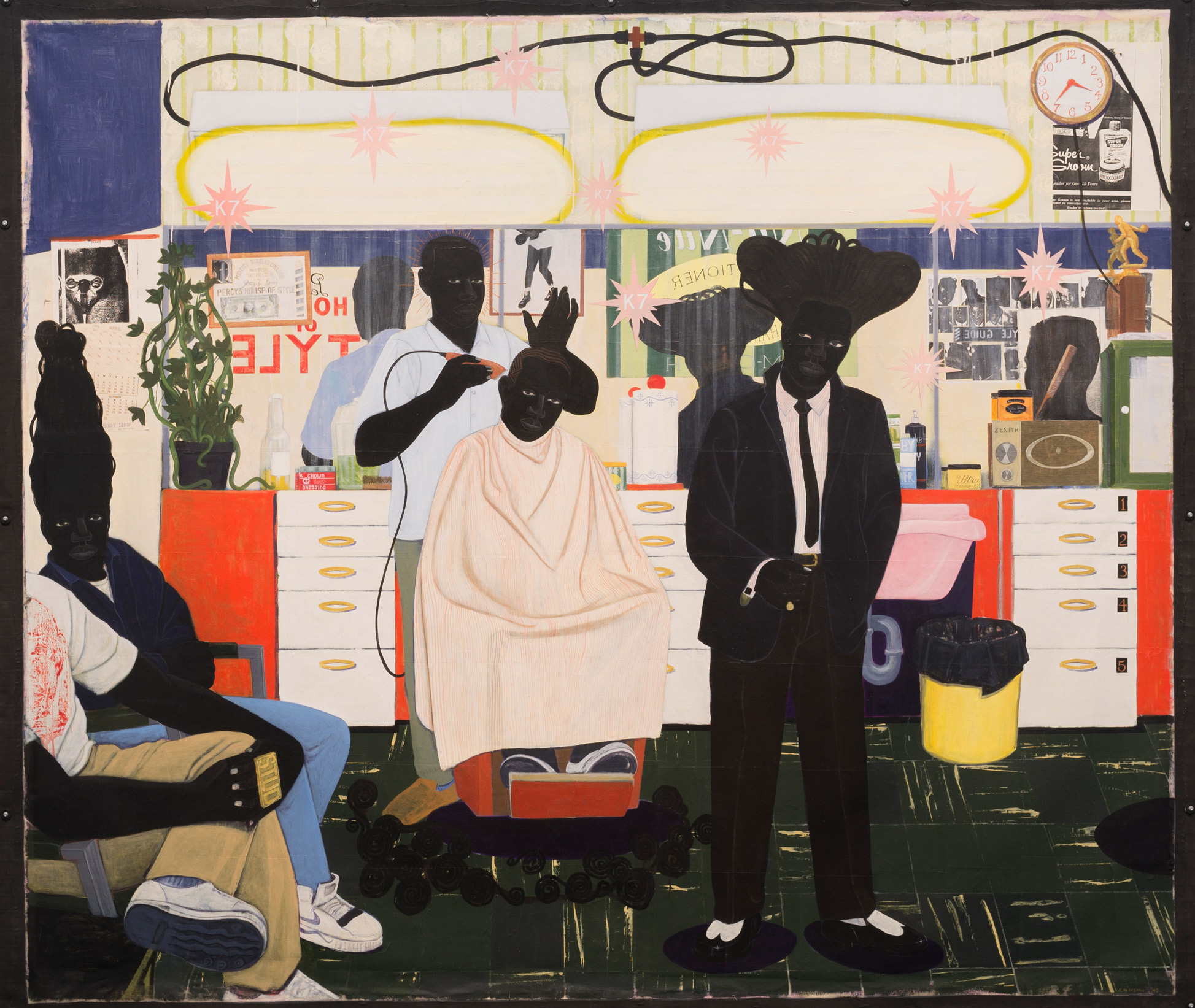 Why is Kerry James Marshall’s painting De Style so perfect for this moment?

Kerry James Marshall’s painting De Style refers to both past and present. This even comes through in the title. It points to the name of the salon in South Central LA where Marshall worked. He shined shoes and swept up at Percy’s House of Style. But De Style also harkens to the “Di Stijl” art movement with this name. A group of young Dutch artists started Di Stijl 1917. They held utopian ideals and promoted a universal spirit and outlook. This was an idealistic vision. For instance, it sought to unify life and art. Di Stijl followed World War I and spawned hope for a harmonious, new day.

There’s a parallel to that fresh perspective in Marshall’s De Style. South Central LA had its own war. In fact, there was a movie about exactly this in 1992 called South Central. De Style followed close behind this portrayal in 1993. But instead of a focus on the turmoil, Kerry James Marshall spotlights a safe space. The barbershop often works as a cultural oasis for the Black community. Some even call it the church for non-believers. That’s because scholars often call barber and beauty shops Black community “sanctuaries”.

Marshall elevates these spaces beyond mere safe havens with De Style. He draws out their fun. After all, there’s inherent whimsy to hair. We style it one way today and another tomorrow. There’s little at stake and lots of creative play. In those ways, the barbershop is nothing like war or South Central, LA. But there are parallels too. A funky hairstyle can signify a shift in identity. That’s a lot like joining a gang or enlisting for war. Yet it works to the opposite effect. Gangs and the military strip an individual’s identity away. All such soldiers look the same – whether in a huge white tee or camo.

That’s why the hair in De Style rocks such unique peaks and sweeps. Marshall coiffes these well-dressed customers with eye catching looks. They’re trademark-worthy styles. So, we’re rapt in hairstyle wonders. While the customers look the painter (and viewers) right in the eye. They pose with full awareness that this moment matters.

In fact, their unity of focus brings us back to the Di Stijl meaning of the piece. Each customer stands out with a unique style. Still that distinction also points to what they have in common. There’s thus a unity to them as a group. Art historians point out that these hairstyles “proclaim their heritage”. But it’s not that simple. This painting isn’t about heritage or tradition. No matter how many keen references it makes to them – it’s about today.

We see De Style‘s modern freshness in the details. They set this masterpiece apart from its predecessors. For instance, its size. Marshall’s barber shop painting stands at more than 8 X 10 feet. That’s a tremendous size for such an intimate, everyday portrayal. Large pieces like this have been relegated to myths and religion throughout art history. So, an everyday subject like Percy’s barbershop sets this piece apart from tradition. The size also lends the painting unexpected gravitas. Hair fashion may be a whimsical matter. But this grand scale gives it weight and makes us look deeper.

The charm of this painting comes through in Marshall’s unusual technique. Large paintings are often wholly realistic or abstract. But De Style gives us neither. It looks like a collage of cutouts with little color variation. This makes the location bits pop. From the bubblegum sink and matching pink stars above to the red barber console – the setting feels like a stage.

These bright hue blocks punctuate the space so that viewers know it’s an important place. Kerry James Marshall also uses flat shapes across the scene. So, even with its enormity of size, De Style feels down to earth. That’s where technique meets subject matter in the piece. It’s an everyday moment at the barbershop. Meanwhile the enormity of the overall painting reminds us that this place means a lot to these people.

Where can I see De Style by Kerry James Marshall in person?

The Los Angeles County Museum of Art (LACMA) owns De Style. But check and make sure it’s on view there before booking a flight. That’s because this painting travels the world. Renowned museums across the globe covet Kerry James Marshall’s work.

So, it may be out on loan at any time. In fact, I saw De Style in Canada about twelve years ago. It’s one of the wonders of modern art, you never know where you might find your next favorite masterpiece.

In what style does Kerry James Marshall paint?

Marshall makes everyday scenes magnificent. He does it with a one-of-a-kind style. There are elements of historical paintings, like grand scale and event portrayal. But he combines these with a pastiche of modern and regional imagery. At heart, Kerry James Marshall creates his own worlds on the canvas. Nobody else paints with that unforgettable flair.

Asked why he gives his subjects pitch dark skin, Marshall gives a quick reply. “One reason is that I am a black person… There are fewer representations of Black figures in the historical record…”. It’s a great answer.

I love how the artist’s direct message on canvas matches his words. He gets right to the point – much like his painting style. Marshall’s shapes are crisp and his colors speak clear. There’s no question Kerry James Marshall is one of the most relevant painters today. His paintings, like De Style, prove this with striking clarity in many of the world’s finest museums.

Why is Kerry James Marshall an important painter?

MacArthur Genius Marshall makes contemporary masterpieces. In the process he also normalizes Black figures in Fine Art. This fills a glaring gap because it also points out the lack of Black figures in art history. Marshall was named one of the 100 Most Influential People by Time Magazine in 2017.

Kerry James Marshall doesn’t eschew this responsibility. He grew up in LA near the Black Panther headquarters. So, this artist and professor learned the profound power of influence at a young age. De Style remains one of my favorite paintings. The reason why is best explained by the following, insightful Marshall quote:

Black people occupy a space, even mundane spaces, in the most fascinating ways. Style is such an integral part of what black people do that just walking is not a simple thing. You’ve got to walk with style. You’ve got to talk with a certain rhythm; you’ve got to do things with some flair. And so in the paintings I try to enact that same tendency toward the theatrical that seems to be so integral a part of the black cultural body.

Check out these other essays on Black Artists

Mason, Wyatt (October 17, 2016). Kerry James Marshall’s Paintings Show What It Means to Be Black in America, The New York Times.