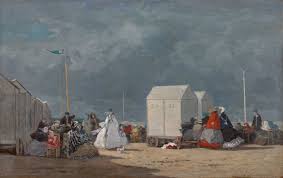 Nature versus Man whips like wind through the painting Approaching Storm. Eugène Boudin often painted the moneyed and middle class. Their fancy finery struck a wry contrast with Mother Nature. Critics of his day (1864) called Boudin’s landscapes “vulgar” for painting the stylish.

But whimsy’s also part of nature – human nature. There’s a jovial tone at the base of this. The approaching storm looms above for us, the viewer, to see. While the partiers below seem to not even notice the wind’s uptick as their bonnet ribbons blow.

Approaching Storm portrays a faceless party. Frivolity rules the day. Without faces, the people seem all the more oblivious to the dark skies above. None of them even look up. In fact, all but one face down. It’s ironic, because that’s where the sun shines in this painting. A brilliant light pool floods its bottom right. This warmth and light captures the party’s attention.

Viewer attention begins with this sunpatch too. But red dresses catch the eye like poppies in a field. Boudin uses fashionable folly to delay our gaze from the approaching storm. These overdressed partygoers can’t hold our attention long, though. As pretty as they seem, they’re more a mass of pricey frocks than real people. The artist invited us to an elite party. But he cast it with faceless characters.

We can’t help but raise our eyes to the burgeoning sky. It blooms with grey foreboding whirls. Seeing it reminds us that the party’s filled with wind. It’s a line of gaiety broken only by silken streamers lifted on the breeze. Eugène Boudin influenced the Impressionists, most notably Monet, using details like this. With just a few blustery ribbons, this master painter invokes Man Versus Nature. Of course, he sets a majestic tableau with a feisty sky and frivolous party. But silk tendrils are the true messengers here.

Boudin’s ribbons sing to us of pretty festivities. They’re the definition of extra. That’s why we call them accessories. Mother Nature has no patience for such frippery. She’s results driven – all business. That’s how Approaching Storm glories in contrast. Flurries puff among the party people – barely noticed. Still the sky tells Nature’s story. It warns of danger. How can they not see?

But upon second glance at the party, we see that one of them does. The man in black lifts an arm to the clouds. He leans in to tell his friends. They don’t seem to listen or see him. We didn’t see him first time around either. The only sign of the approaching storm was those silly ribbons. After all, we’re human too. The shiny stuff gets our attention. That’s how human nature differs from Mother Nature. She means business. We never even figure out what it all means. The man in black represents all the ignored science and data we dismiss along the way.

Art often explores Man Versus Nature. It’s portrayed as a battle; man-fights-world type stuff. Instead, Boudin’s Approaching Storm articulates a rare but apt insight. It’s not a fair fight between Man and Nature. Not because Mother Nature wields such power. Rather, it’s imbalanced because Man prefers oblivion. We crave our escapes. A beach resort sets a splendid stage to show us this about ourselves. Aren’t ribbons pretty? Sure, but they’re about to get drenched and sand-soaked too. Nature always wins.

What is Eugène Boudin most known for?

Boudin painted Approaching Storm in 1864. As a mid 1800s French landscape painter, he was the first to work outdoors. In particular, Eugène focused on marine landscape paintings. He painted all things sea-related.

Where can I see Approaching Storm in person?

Approaching Storm graces the permanent European paintings exhibit at the Art Institute of Chicago. You can visit the museum at 111 S Michigan Ave, Chicago, IL 60603. It’s only one block away from the interactive public art work at Crown Fountain. So, be sure to check that out too.

Why was Eugène Boudin a marine painter – only portraying sea-related subjects?

Eugène Boudin grew up on the bank of the Seine. His father worked as a harbor pilot. Even pre-pubescent Eugène worked on a steamboat that traveled the Seine. Though he gave up this seafaring work life as a teen, Eugène retained his love for the sea.

What was Eugène Boudin’s relationship with Claude Monet?

33 year old Boudin met Monet in 1857 when he was only 18. The elder Eugène convinced Claude to set aside his caricatures and paint landscapes. He continued to mentor the younger painter and they became lifelong friends. Monet paid tribute to the humble Boudin later in life.