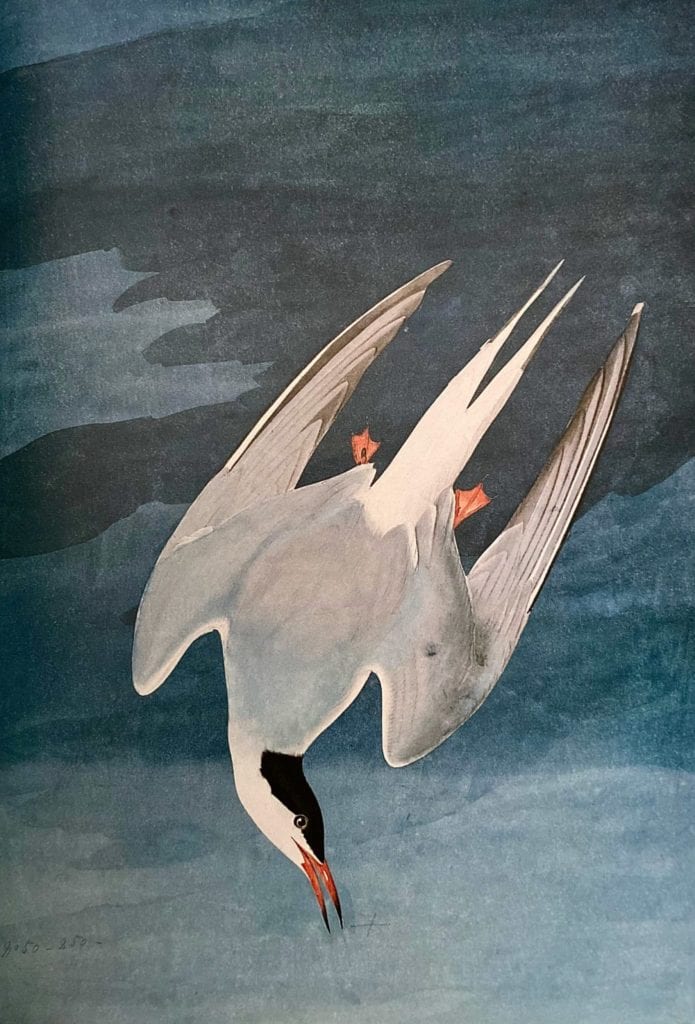 What’s so special about Arctic Tern, the Audubon bird painting?

As a child I loved Arctic Tern by John James Audubon. I grew up outdoorsy. So, I pored over his collection of bird paintings. This classic guidebook series, The Birds of America, also works like an art collection. Audubon accomplished masterworks like this one thanks to his heartfelt love of nature. But he also trained with French master Jacques Louis David. Lucky for us, American painter Audubon wasn’t as fond of Napoleon as David. He fled back to his homeland as soon as Napoleon developed power. Audubon immersed himself in America’s natural beauty. He hunted and taxidermied 1065 birds before painting them.

Before shuddering in horror about Audubon killing birds, take history into account. He painted these birds in the early 1800s. Back then grocery stores didn’t yet exist. That meant if you wanted chicken for dinner, you had to kill one. Craving for apples? Better find an orchard. Audubon’s attentive portraits of each bird are like exaltations given that environment. Birds weren’t just food. They were beautiful. Only because of him did I develop passionate favorites. Without Audubon’s paintings, I wouldn’t have opened The Birds of America. Thanks to him, I’m a lifelong bird lover.

That love began with Arctic Tern. Audubon captures her in a predatory plummet to the sea. Once there she’ll snatch a fish feast then fly away. Her spectacular swoop feels real. Of course, we know Audubon had to paint this of a dead bird. But he brought her back to life on canvas – she zooms. That’s what makes this painting unforgettable. Her orange beak and feet bring this otherwise stark bird alive. While the background sky fades from navy to pale blue. This gives her the essence of movement. She descends into our familiar atmosphere from the dark unknown abyss above. Somehow by falling, she’s also flying.

Audubon’s Legacy of Poignance and Color

Audubon’s magic showed us how Arctic Tern lived. She was sleek, graceful, and fierce. The painter retains her charm with those delightful flipper feet. It’s a surprising contrast with her elegant soaring. These elements work together to remind viewers she’s a creature of earth, water, air, and fire. The deep blues evoke water, where she gets her meals. Those pure white feathers mixed with cloudy grey imbue Arctic tern with the element of air.


Fire resonates in her riotous rush to the kill. She’s got the burning desire to feed. That open beak reminds us she’s an animal on the prowl, even in flight. But those feet are my favorite. They’re how we know she waddles through puddles. Those flippers patter against seashore rocks. She holds them proud and free behind her while flying with a dancer’s grace. That’s the dichotomy. This single bird hunts, totters, and swerves. Arctic terns sashay sleek through the sky. But they stumble ashore.


All creatures have these juxtapositions. We’re better in some places than others. Every animal contains multitudes. This brings a universal sense to Audubon’s Arctic Tern. That’s what makes this painting a masterpiece. It doesn’t matter why he painted her. Sure, she ends up in a book of collected birds. But this tern represents more than a mere bird. She reminds us what it means to be alive.

Why is John James Audubon famous?

Audubon’s so famous he’s become one of those only-one-name icons. He was an extraordinary painter and animal lover. But above all, Audubon set a precedent for bird lovers nationwide. His glorious collected work, The Birds of America, changed the way Americans see birds. These books didn’t just portray their beauty. They also showed each bird’s special traits and behaviors. So, the birds became more like beloved characters. That’s why Audubon’s name graces bird sanctuaries across the country. He started a movement that continues to the day. Check out the National Audubon Society to see the remarkable work they do in his name.

Where can I see Arctic Tern in person?

The best place to see this painting is The National Gallery Museum in Washington, D.C. But if you can’t make the trip, there are many Arctic tern postage stamps. In fact, several countries and dependent territories use this on their stamps. These territories include the countries the Aland Islands, Alderney, and Faroe Islands, as well as Canada, Finland, Iceland, and Cuba.

But I don’t blame you if you want to see the actual bird. In that case, your chances are good. There are about a million Arctic terns alive at present. They live in coastal regions in cool temperate parts of North America and Eurasia in northern summer. During southern summer, Arctic terns are at sea, all the way up to the northern edge of icy Antarctica.

What is the National Audubon Society?

The Audubon Society protects America’s birds. They’ve led the waterbird conservation movement since 1896. It all began when Harriet Hemenway and Minna B. Hall started holding tea parties in Boston. They invited society ladies to convince them that their hats didn’t need feathers to be beautiful. This was the origin of the Massachusetts Audubon Society chapter.

The Society grew and expanded to embrace bird lovers of all sorts. They became activists, changing laws and common practices to protect birds. As early as 1900 they made major changes. This includes shifting an annual bird hunt into a bird count. The National Audubon Society incorporated in 1905. Then in 1923 they opened their first sanctuaries.

Today the National Audubon Society partners with organizations of all kinds to protect the most birds possible. You don’t have to look far to see the benefits of their impact. They have sanctuaries and centers in every state. In fact, the Audubon Society opened its first urban center in 2002. They get about 50,000 visitors every year at this Brooklyn location in Prospect Park. I highly recommend visiting. You’ll be surprised how many rare and wonderful birds fly around New York City. 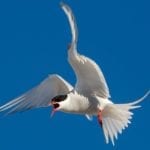 The Arctic tern stands out most for the way it migrates. Terns fly from their Arctic breeding grounds to the Antarctic then back every year. That’s about 12,000 miles at its shortest distance. The terns make this journey so they see two summers per year. That’s more daylight than any other creature in the world.

They also engage in an elaborate courtship. It begins with a chase into the sky’s heights. The female chases the male to a high altitude. Then they slowly descend. The male then dives for fish and offers it to the female. On the ground mating rituals include strutting with a raised tail and lowered wings. Then both birds circle each other flying in the sky again. hat’s dating Arctic tern style.

Check out these other essays on Animal Paintings.