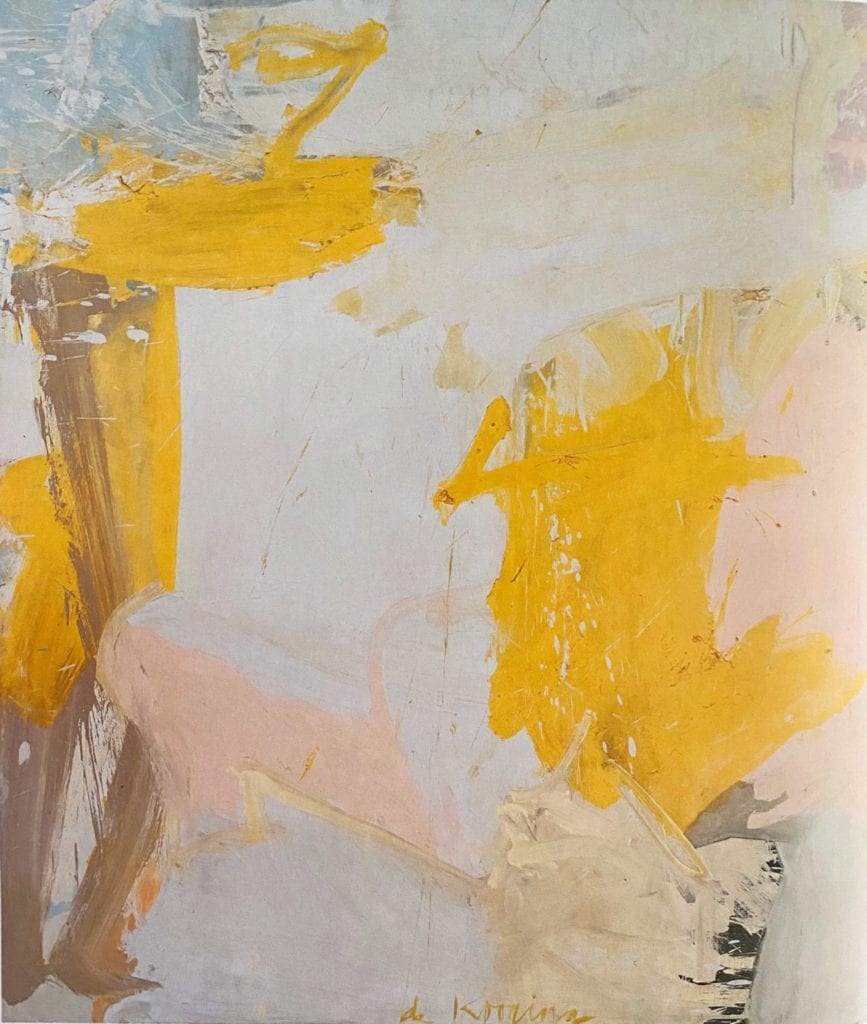 What does Willem de Kooning evoke in the painting Rosy Fingered Dawn at Louse Point?

De Kooning’s work challenges viewers, even Rosy Fingered Dawn at Louse Point. This piece stands apart from most abstracts. That’s because it’s a specific place and even a clear reference. With the title, de Kooning quotes the poet Homer. It was one of Homer’s favorite phrases. This particular dawn appears twenty times in The Odyssey, and the poem repeats the same exact phrase each time: emos d’erigeneia phane rhododaktulos eos: “But when early-born rosy-fingered Dawn appeared…” Homer loved this image for good reason. It’s a lovely and evocative image. There’s a sense of a burgeoning pink glow that imbues early morning.

If you need a reminder of this and don’t read epic poems – check out de Kooning. This Dutch-American painter captures the Homeric essence of a rose petal morning. It was an ideal theme for him. That’s because de Kooning painted suggestions rather than subjects. He was a leader in Abstract Expressionism. De Kooning painted Rosy Fingered Dawn at Louse Point in 1963. At that time only Pollock was more known for Abstract Expressionist painting.

De Kooning has lots in common with Pollock. Both painted with vibrant gestures. This earned them the label “Action Painters”. But de Kooning painted with a distinct talent for theme. He also used specific visual images – especially women. His work stands apart from other Abstract Expressionists. De Kooning imbued every canvas with a significant theme. Rosy Fingered Dawn at Louse Point illustrates my favorite example of this. From its mustard splats to that powder pink heart in the middle, this masterpiece glows. It resonates the fresh promise of a rising sun.

The small body of water at the upper left corner appears minor. Its greenish blue curves away – hedged aside egg yolk yellows and pale pinks. That’s because the painting needs only a single wave to set it at the shore. It’s not a portrait of the Long Island waters, after all. It portrays the early morning. Louse Point is a mere setting. It’s not the whole story. We know this from the title.

But we also learn this from de Kooning’s own take on the piece. He said, “The water reflects,” of this painting, “but I’m reflecting on the water.” De Kooning often answered questions about his work this way. The Dutch-American painter depicted and spoke of abstract mysteries. He held viewers rapt in wonder with words as well as art. Rosy Fingered Dawn at Louse Point evokes this enigmatic practice to perfection. De Kooning tells us the place and theme with the title. Then he envelops us in the early morning experience with expressive brushstrokes and colors.

In 1953 de Kooning said, “the landscape is in the Woman, and there is Woman in the landscapes.” This quote piqued a lot of interest that continues to this day. That’s because his paintings of women raise eyebrows. These portraits showcase ferocious slashings. De Kooning’s trademark gestural brushstrokes read as angry. It’s why art critics and historians often label de Kooning as anti-woman. This bold claim doesn’t fly with me, though. After all, it takes more than a few fierce portraits to prove a pathological condition. I look at de Kooning’s work and note my reactions rather than assume anything about his. Of course, we also have the painter’s words as reference. Whether or not he loved women, we know he loved Louse Point. It was one of his favorite places.

At first sight, I thought this painting was about a woman. The canvas stands tall at nearly seven feet. That heightens its soothing, feminine impact. The yellow on each side seems to embrace the pale pink center of the canvas. This establishes a warm and inviting scene. So, I connected this with a mothering theme. Standing before it felt like a comforting hug. We also know from the title that this painting’s about dawn. That means the birth of a new day. Also, a rosy pinkish limb crosses the painting center, looking a bit like a thigh. Of course, it’s probably a fence or branch in the actual Louse Point landscape. But with that round protrusion beside it, I see a woman’s belly giving birth. It’s still a gentle scene with patches of soft sunshine and a mere brush of the sea above. In dawn’s early sunshine all seems calm. Even a raucous event like birth feels peaceful imbued with morning light.

Today, I still see a woman in Rosy Fingered Dawn at Louse Point. Everything in de Kooning’s work arises from suggestion. That’s part of why he was an Abstract Expressionist leader. His action paintings convey powerful resonance. We get feelings from him – not facts. De Kooning painted a place he loved here. Viewers can sense that heartfelt care in his thoughtful composition and tender colors. It’s a landscape from de Kooning’s memory. But there’s a woman in this landscape. Just like de Kooning said ten years before he painted it.

Why is the painter Willem de Kooning important? 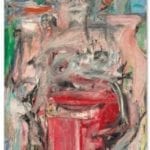 In the 1950s de Kooning’s gestural abstracts lit the art world aflame. Many of his works include recognizable women. But they also brandish these ladies with violent brushstrokes. That’s why in 1953, de Kooning made his dialectical statement about a “woman in the landscape”. People asked him about women a lot due to his fierce portrayals. A fantastic example (at right) was a painting he actually titled Woman as Landscape. This extraordinary painting was valued at a minimum of $60million at Christies auction house.

De Kooning’s often paired with Jackson Pollock. They hit it at the same time and both paint with gestural abstract flair. Still, they’re quite different. Rosy Fingered Dawn at Louse Point shows us de Kooning’s distinction. He integrates figures, especially women, into every painting. So, they’re abstract, but also draw on visual recognition. That’s key to de Kooning’s fame and significance. His work’s relatable. But it also sets the mind on fire.

Louse Point was de Kooning’s favorite place on Long Island. He would bike out to the water every morning to “reflect”. These reflections stayed with him. So, de Kooning painted this piece from memory back in his studio. This lived in his mind before paint met canvas. There’s also suggestion in Rosy Fingered Dawn at Louse Point of a woman’s body. It harkens back to de Kooning’s claim about a “woman in the landscape”. So, that’s reason number two. But foremost we have that literary title. It reaches even deeper into history – all the way back to The Odyssey.

Where can I see Rosy Fingered Dawn at Louse Point in person?

De Kooning’s work exhibits around the globe. For instance, Rosy Fingered Dawn at Louse Point lives in the Netherlands. The Stedelijk Museum exhibits this de Kooning. Established in 1874, this Amsterdam museum is the largest in the Netherlands. Best of all, it’s quite close to both the Van Gogh Museum and Rijksmuseum. This creates a fine arts triangle that makes an Amsterdam trip more than worthwhile. Also the artwork at Stedelijk fits into the Modern or Contemporary art categories. So, de Kooning’s work seems right at home.

Christies on Woman as Landscape